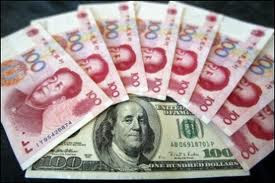 It is estimated by 2015 the Yuan/Renminbi will be a currency traded fully and internationally.


A "renminbi bloc" has been formed in East Asia, as nations in the region abandon the US dollar and peg their currency to the Chinese yuan — a major signal of China's successful bid to internationalize its currency, a research report has said.

And now seven out of 10 economies in the region — including South Korea, Indonesia, Malaysia, Singapore and Thailand — track the renminbi more closely than they do the US dollar. Only three economies in the group — Hong Kong, Vietnam, and Mongolia — still have currencies following the dollar more closely than the renminbi, said the report, posted on the institute's website.

Wang Jianhui, chief economist with Southwest Securities Co Ltd, agreed. "Investors are looking for new reserve currencies at a time when both the dollar and euro are under pressure. This is a good opportunity for the yuan," he said.

The Royal Bank of Scotland predicted in a report on Monday that renminbi will become a fully convertible currency in 2015.

Cross-border trade settled in renminbi will triple to 6.5 trillion yuan ($1.03 trillion) within three years as relations with the world's second-largest economy grow, Royal Bank of Scotland Group PLC was quoted as saying by Bloomberg on Oct 9.

In fact, trade is also propelling the rise of the renminbi outside East Asia. The currencies of India, Chile, Israel, South Africa and Turkey all now follow the renminbi closely, in some cases, more so than the dollar. The renminbi would be more attractive if the country could further liberalize its financial and currency markets, the report said.