China's Moon Landing Appears To Be Another Staged Hoax

Last week China made international news claiming to have successfully landed a spacecraft carrying a lunar rover called the “Jade Rabbit” on the moon.  Unfortunately like other publicized space exploration spectacles this event is highly questionable and appears to be another hoax.  Many researchers have proven conclusively that the American missions to the moon during the Apollo era of the late 1960s and early 1970s were faked in a television studio on Earth.  It is no wonder why Apollo astronauts like Buzz Aldrin get angry and punch people when confronted about their participation in the fraud.  It is truly sad that the Chinese have decided to follow this same hoax formula as they attempt to project national prestige through their space program.  It is however much more cost effective to fake a mission into space than to actually do it legitimately. 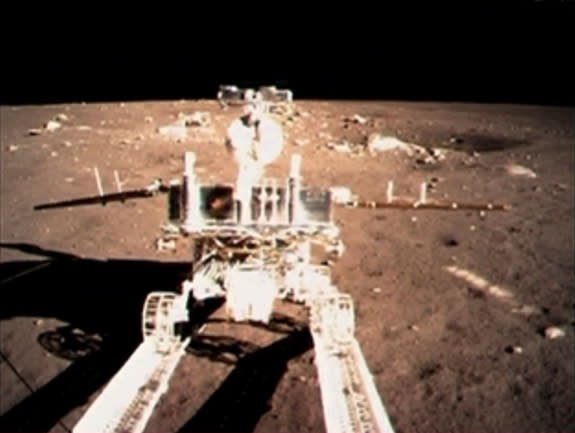 China’s space program already has a dubious history after many independent researchers questioned the authenticity of video footage claiming to show the nation’s first manned spacewalk back in 2008.  The footage of the alleged spacewalk at one point (3:00 in) shows what appear to be water bubbles floating past an astronaut.  This indicates that the footage the Chinese passed off as their first spacewalk was shot in a water tank and not in space.  Details surrounding the so-called successful spacewalk including quotes from the astronauts involved in the mission were released prior to the mission even launching.  In other words, the scripted event was released to the public too early.  This embarrassing situation further confirmed people’s doubts about the spacewalk’s legitimacy and provided more proof that the entire event was staged.

The only other footage we have been shown of this mission is a brief video clip supposedly showing the “Jade Rabbit” lunar rover rolling itself out on to the lunar surface.  Some of the same questions that people have raised about the Apollo footage pertains here.  The footage shows black sky with no stars or other celestial reference points.  In addition, the horizon shown is curved in a very strange manner.  It looks man made without the normal inconsistencies you’d expect to see if we were truly looking at the real lunar horizon.

On top of this, there has been very little mention of the space mission since the alleged landing and rover deployment last week.  We have also seen no high quality pictures or video footage taken of the lunar surface.  If this were a real mission, one would think that they would be sending back hundreds if not thousands of new images and video in high quality to show off the powerful technological capabilities of the Chinese state.  None of this has happened which gives more credence to the premise that this event is being faked.

Besides the footage mentioned earlier the only other significant material released so far has been a panorama picture of the lunar surface.  Instead of releasing a high quality source image, it has been released in the form of a video camera recording the image off of a projector screen.  This is the same tactic that was used during the Apollo 11 mission undoubtedly to mask or hide imperfections of the stage.  Interestingly enough, the panorama which should show both the sun and the earth are not seen at all anywhere in the sky of the picture.  All of this raises some serious questions about the photo’s authenticity along with the authenticity of the mission itself.  It is pretty sad that you could actually argue that the James Bond film "Diamonds Are Forever" released back in the early 1970s provided a better hoax recreation of the lunar surface than what we are seeing here.

It should be interesting to see how the Chinese will deal with this moving forward since everything we have seen so far indicates that this mission is nothing more than a gigantic fraud.  The footage and images that we have been shown so far are about the same quality of the stuff we saw back in the late 1960s and early 1970s during the Apollo hoaxes.  This in of itself is ridiculous considering that we’ve since had over 40 years of advances in camera technology.  Take for example some of the high resolution photos taken from the Hubble telescope.  Simply put, the Chinese have given us no reason to believe that this mission is real and every reason to believe that it is fake.