How Hillary Clinton Exposed Her Emails To Foreign Spies... In Order To Hide Them From The American Public

So the whole Hillary Clinton email story is getting worse and worse for Clinton. We already noted that there was no way she couldn't have known that she had to use government email systems for government work, as there was a big scandal from the previous administration using private emails and within the early Obama administration as well. This morning we discovered that Clinton also gave clintonemail.com email addresses to staffers, which undermines the argument made by Hillary's spokesperson that it was okay for her to use her own email address because any emails with staffers would still be archived by the State Department thanks to their use of state.gov emails. But that's clearly not the case when she's just emailing others with the private email addresses.  As we noted yesterday, there are two separate key issues here, neither of which look good for Clinton. First, is the security question. There's no question at all that as Secretary of State she dealt with all sorts of important, confidential and classified information. Doing that on your own email server seems like a pretty big target for foreign intelligence. In fact, Gawker points out, correctly, that Hillary's private email address was actually revealed a few years ago when the hacker "Guccifer" revealed the inbox of former Clinton aide Sidney Blumenthal. So it was known years ago that Clinton used a private email account, and you have to think it was targeted.

Anonymous State Department "cybersecurity" officials are apparently shoving each other aside to leak to the press that they warned Clinton that what she was doing was dangerous, but couldn't convince her staff to do otherwise:

“We tried,” an unnamed current employee told Al Jazeera. “We told people in her office that it wasn't a good idea. They were so uninterested that I doubt the secretary was ever informed.”

The AP has a somewhat weird and slightly confused article detailing the setup of the email system, but seems to imply things that aren't clearly true.

It was unclear whom Clinton hired to set up or maintain her private email server, which the AP traced to a mysterious identity, Eric Hoteham. That name does not appear in public records databases, campaign contribution records or Internet background searches. Hoteham was listed as the customer at Clinton's $1.7 million home on Old House Lane in Chappaqua in records registering the Internet address for her email server since August 2010. The Hoteham personality also is associated with a separate email server, presidentclinton.com, and a non-functioning website, wjcoffice.com, all linked to the same residential Internet account as Mrs. Clinton's email server. The former president's full name is William Jefferson Clinton. 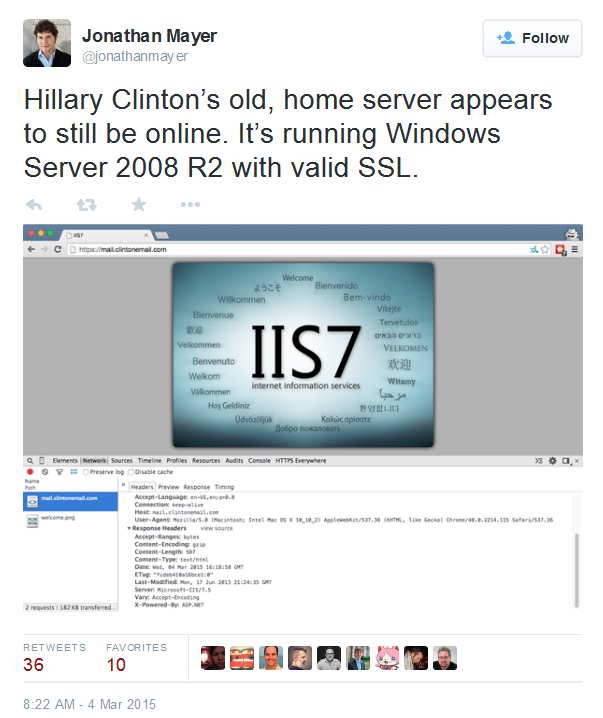 However, the AP reports that the email has moved around a bit over the past few years:

In November 2012, without explanation, Clinton's private email account was reconfigured to use Google's servers as a backup in case her own personal email server failed, according to Internet records. That is significant because Clinton publicly supported Google's accusations in June 2011 that China's government had tried to break into the Google mail accounts of senior U.S. government officials. It was one of the first instances of a major American corporation openly accusing a foreign government of hacking. Then, in July 2013, five months after she resigned as secretary of state, Clinton's private email server was reconfigured again to use a Denver-based commercial email provider, MX Logic, which is now owned by McAfee Inc., a top Internet security company.

That likely means the email was much more secure after July of 2013, but it certainly raises questions about how secure it was for years before that.
Though, we do know that it was secure from one thing: FOIA requests. That is the second of the two big issues raised by this whole thing. By using her own email setup, she was clearly able tohide important documents from FOIA requests. In fact, as Gawker notes, her staff's defense of the use of her private email, actually now confirms emails as legit that the State Departmentdenied existed back when Gawker made a FOIA request years ago.
That's because following that Guccifer hack, Gawker filed a FOIA for those emails and was told they don't exist. Yet, now Clinton staffers point to that old Gawker article to suggest that the private email address is "old news," thus confirming that the emails were legit, even though the State Department denied them.

The Clinton camp’s claims about the email account being above-board is also contradicted by the State Department’s response to Gawker’s inquires two years ago. After we published the story about Blumenthal’s correspondence with Clinton, we filed a FOIA request with the agency for all correspondence to date between Hillary Clinton and Sidney Blumenthal, specifically including any messages to or from the hdr22@clintonemail.com account. The screenshots and other documents released by Guccifer—which have now been validated by Clinton’s spokesman—confirmed that such messages existed. But the State Department replied to our request by saying that, after an extensive search, it could find no records responsive to our request. That is not to say that they found the emails and refused to release them—it is conceivable, after all, that the State Department might have attempted to deny the release of the Clinton-Blumenthal correspondence on grounds of national security or Blumenthal’s own privacy. Instead, the State Department confirmed that it didn’t have the emails at all. Which is exactly why Clinton used a non-State Department email server to conduct her official business.

According to the NY Times, the State Department says that it won't go back to correct the FOIA requests that it responded to in the past, saying that such records didn't exist. Instead, it will only now search the emails that have been turned over by Clinton's staff. That is another 50,000 emails, but no one knows what emails the staff removed or refused to turn over.

Either way, there are two huge problems here. Clinton likely exposed her emails to foreign spies, while keeping them away from the American public.