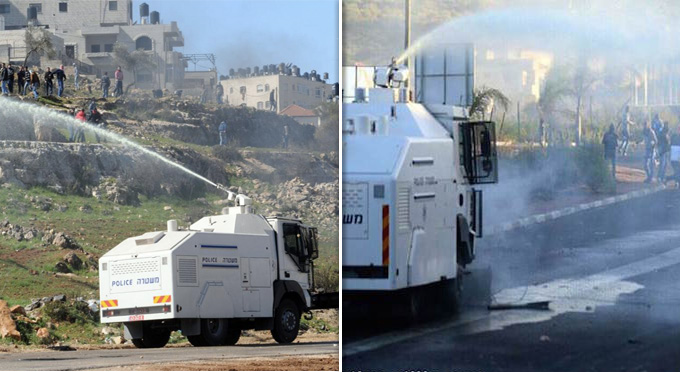 Israeli police in Jerusalem have been caught on video recently spraying East Jerusalem Palestinian neighborhoods with a concoction they call “skunk spray”. The liquid is a mixture of sewage and rotting animal roadkill.

The result of the police hosing down neighborhoods, elementary schools and protesters with the mix is a putrid smell that seems almost impossible to get off or be around without inducing nausea. As a result, thousands of East Jerusalem children have been forced to stay home from school.

In the neighborhood of At-Tur (The Mount of Olives), police hosed down local elementary schools at 5:30 p.m., according to Khader Abu Sabitan, a member of the parents’ committee. He told 972mag that he “was on the road and saw them pass with their machine, and saw how they began shooting water at the school. I’m telling you – there was nothing there. It is Friday at 5:30 in the evening, and there was no one in the school or on the streets. Nothing. Everyone was home. They went to all four schools in the neighborhood, shot the water, and left.”

A similar video was taken in the neighborhood of Jabel Mukaber: