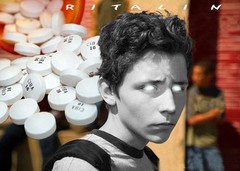 ﻿It’s the latest thing. Psychiatrists are now giving children in poor neighborhoods Adderall, a dangerous stimulant, by making false diagnoses of ADHD, or no diagnoses at all. Their aim? To “promote social justice,” to improve academic performance in school.

The rationale is, the drugged kids will now be able to compete with children from wealthier families who attend better schools.

Leading the way is Dr. Michael Anderson, a pediatrician in the Atlanta area. Incredibly, Anderson told the New York Times his diagnoses of ADHD are “made up,” “an excuse” to hand out the drugs.

It would be hard to find a clearer mission statement from a psychiatrist: mind control.

A researcher at Washington University in St. Louis, Dr. Ramesh Raghavan, goes even further with this chilling comment: “We are effectively forcing local community psychiatrists to use the only tool at their disposal [to “level the playing field” in low-income neighborhoods], which is psychotropic medicine.”

So pressure is being brought to bear on psychiatrists to launch a heinous behavior modification program, using drugs, against children in inner cities.

It’s important to realize that all psychotropic stimulants, like Adderal and Ritalin, can cause aggressive behavior, violent behavior.

What we’re seeing here is a direct parallel to the old CIA program, exposed by the late journalist, Gary Webb, who detailed the importing of crack cocaine (another kind of stimulant) into South Central Los Angeles, which went a long way toward destroying that community.

It is widely acknowledged, and admitted in the Times article, that the effects of ADHD drugs on children’s still-developing brains are unknown. Therefore, the risks of the drugs are great. At least one leading psychiatrist, Peter Breggin, believes there is significant evidence that these stimulants can cause atrophy of the brain.

Deploying the ADHD drugs creates symptoms which may then be treated with compounds like Risperdal, a powerful anti-psychotic, which can cause motor brain damage.

All this, in service of “social justice” for the poor.

And what about the claim that ADHD drugs can enhance school performance?

The following pronouncement makes a number of things clear: The 1994 Textbook of Psychiatry, published by the American Psychiatric Press, contains this review (Popper and Steingard):”Stimulants [given for ADHD] do not produce lasting improvements in aggressivity, conduct disorder, criminality, education achievement, job functioning, marital relationships, or long-term adjustment.”

So the whole basis for this “social justice” program in low-income communities—that the ADHD drugs will improve school performance of kids and “level the playing field,” so they can compete academically with children from wealthier families—this whole program is based on a lie to begin with.

Meddling with the brains of children via these chemicals constitutes criminal assault, and it’s time it was recognized for what it is.

In 1986, The International Journal of the Addictions published a most important literature review by Richard Scarnati. It was called “An Outline of Hazardous Side Effects of Ritalin (Methylphenidate)” [v.21(7), pp. 837-841]. Adderall and other ADHD medications are all in the same basic class; they are stimulants, amphetamine-type substances.

Scarnati listed a large number of adverse affects of Ritalin and cited published journal articles which reported each of these symptoms.

For every one of the following (selected and quoted verbatim) Ritalin effects, there is at least one confirming source in the medical literature:

In what sense are the ADHD drugs “social justice?” The reality is, they are chemical warfare. Licensed predators are preying on the poor.

Jon Rappoport - The author of an explosive collection, THE MATRIX REVEALED, Jon was a candidate for a US Congressional seat in the 29th District of California. Nominated for a Pulitzer Prize, he has worked as an investigative reporter for 30 years, writing articles on politics, medicine, and health for CBS Healthwatch, LA Weekly, Spin Magazine, Stern, and other newspapers and magazines in the US and Europe. Jon has delivered lectures and seminars on global politics, health, logic, and creative power to audiences around the world. Please visit Jon’s excellent site, www.nomorefakenews.com.