Source: From Behind Enemy Lines

There have been developments in the Salman Abedi story – and they are mostly preposterous. The serious news is all in Libya, and we’ll get to that after the farce. 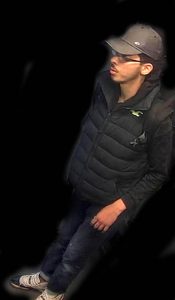 First up are the two pictures released by the authorities of someone – purportedly Abedi – surrounded by blackness (one of which is here shown on the left). The author understands from reading around the images that Abedi is meant to be in a lift on his way to slaughtering the children, but he has been taken out of context in order not to hurt feelings or offend. Is it good enough? No, not in the slightest – not in the land of due process, and not when the British Government has been caught banged to rights in the act of committing state crime. The author suggests an alternative reason for blacking out Abedi’s surroundings: so that people who would have been in the picture don’t recognise themselves, and come forward to explain that they weren’t anywhere near the Manchester Arena on the 22nd May. Note in these “Abedi in space” images, the suspect is meant to be wearing a type of rucksack (pictured here) that has a high back that should appear above his neck. The reader can decide for him or herself if they think such a thing is visible in the image.

Secondly, police have also released a new image of someone they say is the Manchester Arena bomber with a huge blue luggage piece that they are calling a “suitcase”. Their motives for doing this were retailed by the Manchester Evening News as follows:

A senior counter-terror officer revealed their focus on the busy south Manchester route as one of several new threads of the investigation into the atrocity last week. 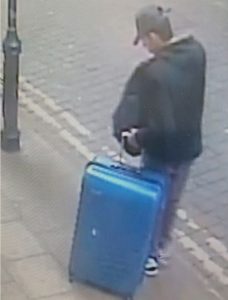 The author submits that this piece of Public Relations is nothing to do with any investigation, and everything to do with tying up loose ends from the alternate reality that the British Government let loose before its narrative was completely undermined by other details published by US media. The reader should look at the previous articles hereabouts for full coverage of this topic, but to give a brief explanation: the Times newspaper claimed that it had seen CCTV footage of Abedi using a “suitcase bomb”. The following is the Independent’s account. Read it carefully:

Abedi used a suitcase bomb packed with homemade explosives and nails for the attack – the same method used for Isis’ bombings at Brussels Airport and Molenbeek metro station last year.

CCTV footage seen by The Times showed the 22-year-old putting the suitcase down in the foyer between Manchester Arena and Victoria station shortly before it detonated amid Ariana Grande fans pouring out of the concert.

The extract clearly states that the suitcase – meaning the bomb in it – detonated. However, a revised version of events, after intelligence shared with the US was leaked into the public domain, had it that the bomb had been in a Karrimor rucksack. Obviously, this presented a problem for the British authorities, because it introduced a risk that even the most naïve and meek of British subjects would become suspicious and start wondering why people who were supposedly beyond reproach would lie about the facts of such a distressing case. And so what the British authorities have done to solve their problem is present something to assuage the public cognitive dissonance.  The production of a picture of “Abedi with suitcase” is meant to address the puzzlement that two contradicting bomb delivery narratives must have produced in anyone who was trying to reconcile them. Certainly there is a reliance, when trying to pull this sort of thing off, on the public not remembering data correctly – but then the public are very reliable in these regards. And so it doesn’t matter if there is, in actuality, no relation whatsoever between the bombing and the image of “Abedi with suitcase”. All that matters is that the public are allowed to forge an association, and that association will explain why anyone will have ever encountered the concept of “Abedi with suitcase”.

So, what to make of the image in the light of its use as psychology in order to fix a mistake? There are several areas of discussion, including the actuality of Abedi being watched before the incident – in spite of what the intelligence agencies and police say. One that we shouldn’t rule out is that the image was created to order after the event. Yes, that has a certain ramification that may be hard to digest. But look at this:

The remains of suicide bomber Salman Abedi will never be cremated or buried in Greater Manchester as authorities battle to keep the killer’s body separate to those 22 victims of his attack .

Abedi’s remains are currently being kept at a morgue outside of the Greater Manchester area, according to the Manchester Evening News .

Abedi’s body is understood to be the property of the coroner.

Inquest hearings could be held in due course, and any ultimate decision regarding his remains will be down to a coroner, the source said.

This idea of separation between Abedi and the victims is obviously just a cover story because the author can only identify 8 victims of the 22 dead (from the list here) as being from Greater Manchester (including Bolton). The cover story is to normalise how the government gets to keep the remains of “Abedi” and decides how to dispose of them. The author’s suspicion, first voiced in a previous article on this subject, that Abedi wasn’t even at the scene of the crime does not dissipate.

Now on to the really interesting news. An article in an African publication suggests that the arrest of Salman Abedi’s father in Tripoli was partly responsible for kicking off a huge clash between Libyan militias.

When suicide bomber Salman Abedi, a 22-year-old British-Libyan, triggered his bomb packed with nuts and bolts Monday in Manchester, he not only brought Libya’s civil war to the streets of Britain, he may well have wrecked the chances of a peace deal being struck between rival governments and their militia backers in the strife-torn North African state.

First of all, let’s look at why this might be feasible. What we do know for certain is that Salman Abedi’s father, Ramadan, was…

an administrative manager of the Central Security Force in the Libyan capital, was detained separately by security forces in the city, on suspicion of having links to the Islamic State group.

What the British corporate-media (source) never tells us is that the Central Security Force is also known as the Nawasi brigade – basically, the National Transitional Council (NTC), after it was gifted the nation in 2011 by the Royal Navy, Royal Air Force, the SAS and MI6 – amongst others – gave out fiefdoms to allied militias who had fought the Gaddafi government forces. The Nawasi brigade are a Salafist-led group, and Salafism is likened to Wahhabism – so, it’s an extreme form of Islam. Moreover, it appears to the author, although he welcomes being corrected, that the Central Security Force is rather like an Islamic police because of how “the group mainly focuses on combating drug and alcohol related crimes, as well as other non-Islamic conduct”.

So, the Manchester Bomber’s father was/is an “administrative manager” in a Libyan Islamic enforcement police. Thanks to your tax dollars.

After the bombing in Manchester  it appears that he was arrested while – or not long after – he was speaking to media and denying that his son had anything to do with the attack. He was arrested by the Special Deterrent Force, which appears to be another militia-turned-police force that seems to be more directly attached to the GNC government (explained below). The author is not clear about its authority in relation to the Central Security Force, especially when it sends “masked gunmen” to arrest a “terrorist suspect” (a UK media spin?), but if we think about it in terms of militias nabbing each other’s members then perhaps we can imagine that it might cause a lot of trouble.

Indeed, the situation in Libya is very complicated – did the reader know that even now there rages in that country the “Second Libyan Civil War”. There are essentially two governments (a third, the Government of National Accord, is a UN reconciliation project). Based in Tobruk, the House of Representatives and the Libyan National Army, led by General Haftar, are moderates (and the power that the surviving pro-Gaddafi Green Movement might yet make an alliance with). In Tripoli is the General National Congress (GNC), which is Islamist, and just declared itself the government when it didn’t like the outcome of the 2014 parliamentary elections. Both sides are fighting other factions, including a contingent of ISIS.

The significant thing about all this is that the Libyan connection became overt through the US intervention of leaked material – whereas the British were, and still are trying to make a big thing about supposed ISIS links with Abedi. This does invite suspicion that behind the leaking of the Manchester Arena bombing intelligence was a desire to create a good excuse for more fighting in Libya. Would that be something the US would be looking for? We can’t know for sure, of course. However, there is talk of the Libyan National Army receiving backing from Russia – we know Egypt is definitely on side.

On the other side, the GNC was basically the NTC during and immediately after the overthrow of Gaddafi. This transition came about basically because of an Islamist fix-up. The author wrote about it at the time, and the piece he produced is important because it notes how much the whole adventure by NATO in Libya was ultimately about handing power to the Muslim Brotherhood – a political movement that doesn’t seem to feature these days in the news at all, let alone in conjunction with Libya. But make no mistake – these Islamists in Libya were the US and UK’s men, in the same way that they were in Egypt before they were deposed in the 2013 military coup.  That constituted a defeat for the Globalists, and what has happened in Syria since then looks like it will constitute another. If there is peace in Libya that is favourable to Haftar, the US neo-con, Globalist enterprise might be entirely rolled back there also.