You are an embattled nation with the entire world watching. Your allies Russia and China just made a major decision at the UN Security Council in your favor with much of their reputation and future at stake. Western propagandists have been relentlessly making up news stories regarding your nation no matter what you do, for nearly a year, starting with “Gay Girl in Damascus” who Syrian activists insisted was still real even after doubts began to surface, and leading up to daily reports from “activists say” coming out of London, England.

Your choices: continue a campaign to restore order in Homs which is admittedly overrun by cross-border militants and foreign terrorists operating with NATO support and arms, fighting under the banner of the “Free Syrian Army.” Or, spend your time instead purposefully killing women and children in front of British and French journalists before plotting over easily-intercepted radios their spectacular deaths in front of a watching world? 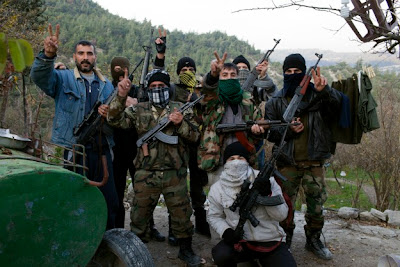 Image: Syria’s rebels are armed. Were they running loose in New York City, a military operation mobilized to neutralize them would not be described as a “massacre” by the corporate media.

Quite clearly there is something wrong with this narrative being given to us by the West, who have established themselves by a comfortable margin as serial liars. Iraq lost a million sons and daughters to these lies. Libya likewise was portrayed as a nation “massacring civilians” when it is now clear these “civilians” were US State Department-listed terrorists of the Libyan Islamic Fighting Group who are now conducting nationwide murder sprees.

Reading any report out of the corporate-media, we find Syria’s campaign against admittedly armed rebels paradoxically referred to as a “massacre,” and an almost palpable fervor to justify circumventing the latest UNSC resolution veto. As news comes out of the death of two foreign journalists in Homs, Remi Ochlik and Marie Colvin who sneaked into Syria and were operating there illegally to begin with, Western leaders are unanimously calling this the “breaking point.” France’s Nicolas Sarkozy even stated, “that’s enough now, this regime must go and there is no reason that Syrians don’t have the right to live their lives and choose their destiny freely.”

One wonders where Sarkozy’s moral fortitude was when in January, while covering a pro-Assad rally in Homs, French journalist Gilles Jacquier was killed in a rebel attack. Unbelievably, not only does this contradict the news we’ve been told all along of Assad persecuting a brutal campaign against peaceful protesters, but while the attack was condemned by France, it was the Syrian government who was blamed for not protecting their journalists from armed thugs. Where were the calls for the rebels to lay down their arms? Where was the cessation of political support for the “Free Syrian Army?” Where was the decision by NATO to discontinue their support for rebels who had now murdered a Western journalist?

Clearly, reason is not driving Western foreign policy, rather a search for a convenient “casus belli” to serve where their “responsibility to protect” doctrine has failed. We will not know what really happened in Syria this week regarding the two journalists allegedly killed there, so long as “activists say” is attached to each claim made about the events.

What we do know is that the West has long ago predetermined that regime change will occur in Syria, and that they will do anything necessary, at any cost to achieve it.

Tony Cartalucci is the writer and editor at Land Destroyer Report