Google, the NSA & DHS are creating a global DNA database 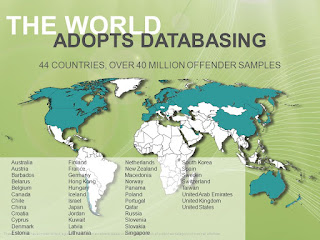 image credit:Global Expansion of Offender DNA Databases
According to the Verge, Ancestry.com, is seeking permission from the FDA to create a national DNA database. Ancestry.com claims they'll use your DNA to assess your families disease risk.

Would it shock you to know that Google, the NSA and DHS are using "front companies" to create a GLOBAL DNA database?
“On the heels of our AncestryHealth launch and our one million genotyped customers milestone for AncestryDNA, we’re excited to announce this collaboration with Calico to research and develop life changing solutions,” said Ken Chahine, Executive Vice President and Head of DNA and Health. “We have laid the groundwork for this effort through the combination of an unmatched family history database, one of the fastest growing genetic databases..."

“A lot of people want to get into the genomics risk assessment game. It's seen as highly lucrative,I don't think they're giving customers straight information about their ancestry — and I'm wary when I hear them saying, 'Oh well now we're in the health business.'"

Is Ancestry.com giving people straight info. about their ancestry? Are they in actuality working for the government?

Ancestry.com recently purchased the Sorenson Molecular Genealogy Foundation. The Sorenson's Database had more than 100,000 DNA samples and documented multi-generational family histories from “volunteers in more than 100 countries around the world.”

Your DNA is not safe with Ancestry.com:

In March of this year Ancestry.com let police search their DNA database without a warrant!

Without a warrant or court order, police investigators were able to run the crime scene DNA against Sorenson’s private genealogical DNA data. The search turned up 41 potential familial matches to Michael Usry. The cops then asked Ancestry.com, not only for the “protected” name associated with that profile, but also for all “all information including full names, date of births, date and other information pertaining to the original donor to the Sorenson Molecular Genealogy project.”  FYI, Ancestry.com offered to disclose this information in response to a simple subpoena.

According to a Guardian article, soon police will be equipped with portable palm size DNA scanners that will read your DNA in 48 hours: 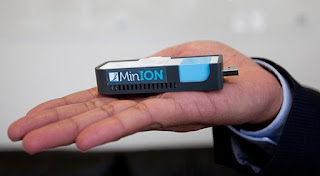 In April, a team in Guinea read the genomes of 14 Ebola samples within 48 hours of them being taken from patients.

“This is so revolutionary,” said David Buck at the Oxford Genomics Center. “If you’re a fan of Star Trek, you can think of it as getting close to having a tricorder in your hand.”

Ancestry.com customers can purchase DNA kits from companies that have close ties to Google or are run by them...

23andMe is run by Anne Wojcicki, the ex-wife of Google co-founder Sergey Brin!  23and Me is also recording the DNA of EVERY Parkison's disease patient.

FYI, in 2013 the FDA ordered 23andMe to halt the sale of its DNA kit because they failed to demonstrate its validity.

Ancestry.com's CEO Tim Sullivan has managed to collect DNA from more people than 23andMe. "We're confident that we now have the largest [genetic] database" he said.

Calico labs is owned by Google and Arthur Levinson, is the CEO. Levinson is also the former CEO of Genentech.

Below are a four examples of Genentech's close relationship with DHS:

Andrew Mullen, author and speaker has a close relationship with Genentech and DHS.

Ancestry.com and Google claim they're collecting your DNA to end disease and aging. Would you trust Google not to share their DNA database with the NSA and DHS?

Tim Sullivan, Ancestry’s CEO brags about how they want to share their data with our government sorry, I meant Google:

"We have been looking at, and frankly responding to, inquiries from a number of parties about ways that we can collaborate to take the data that we’ve aggregated historically, and that we’re starting to aggregate now, and get some real scale.”

“We have a lot of business relationships with Google, but nothing else that I can speak to,” Sullivan said.

Why no one should trust Google with your DNA...

“Google’s business model is the spy. It makes more than 80 percent of its money by collecting information about people, pooling it together, storing it, indexing it, building profiles of people to predict their interests and behavior, and then selling those profiles principally to advertisers, but also others,” Assange said.

Below are examples of Google's business relationship with DHS:

1.) DHS uses Google Analytics to spy on everyone.

"DHS uses Google Analytics measurement software to collect the information listed above. The data are automatically sent to Google’s system and the system immediately aggregates the data. The Department retains the data from Google Analytics, and Survey Monkey survey results only as long as required by law or needed to support the mission of the DHS websites."

2.) Google and DHS work in secret to spy on the public.

"Google apparently is willing to do more than its public (and not so public) positions; Google suggested you as the most balanced and reasonable person on the studio side and specifically requested your participation. No other studio would be involved."

Don't forget the FBI and Interpol already have a massive DNA database.

Below is a brief list of organizations that are working together to create a worldwide DNA database:

President and Executive Director of Council for Responsible Genetics Jeremy Gruber claims the US needs more comprehensive laws to protect citizens from inappropriate usage of their genetic information.

“I think we need greater public awareness and greater legislative attention to this problem, so that we are fully protected,” Gruber said, adding that people will be far more likely to participate in research and other activities that will benefit human kind with regards to genetic research, if there are laws in place that will protect them from misusage of genetic information.

According to an article in Sputnik News, the public can't sue our government to find out what they're doing with our DNA...

At the moment people are not allowed to pursue individual litigation and have to go through government authorities, which do not fully disclose information on what they are doing to raise awareness, so that more complaints can be filed.