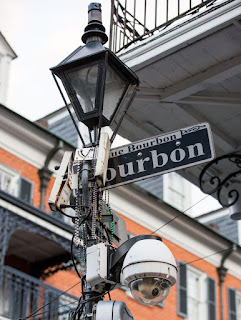 Bourborn Street/Mardi Gras will never be the same as police state America uses our fears of terrorism to turn 20 neighborhoods into a giant surveillance network! As you'll see, no one is safe from New Orleans spying surveillance cameras.

When it's completed, the new spying system will cost taxpayers $3.8 million a year.

Councilman Jason Williams is concerned about how police will use surveillance cameras...

“How will I know if (the video) is being shared with immigration agents or enforcement officers?” Williams asked. “Who knows how these cameras could be used” Williams said.

Williams warns, “throughout history, well-meaning but ultimately misguided overreactions to these issues have been used to unnecessarily curtail personal freedoms."

According to Mayor Mitch Landrieu's press release, Bourbon St., will be surveilled 24-7.

Mayor Landrieu's spokesman Tyronne Walker said, “security concerns” prevented him from going into details about how the Feds are using cameras to spy on everyone.

That's ludicrous, police spying on everyone isn't a state secret!

“Assume that you are being filmed wherever you are and whatever you’re doing,” said Jeff Sallet, the newly appointed head of the FBI’s local office.

“We have located and mapped every single camera in and around any part of the French Quarter, the parade routes and any other critical infrastructure,” he said.

ProjectNOLA buys its cameras from their own for-profit business CCTV Wholesalers. Then they
charge people monthly maintenance fees to allow ProjectNOLA to spy on everyone!

How many people will go to Mardi Gras knowing that DHS, the FBI and the police are spying on them? 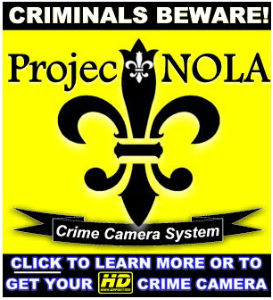 These organizations use resident's homes and business cameras to spy on the public. According to Safe Cam NOLA, police have access to a huge database of homes equipped with surveillance cameras.

"Project NOLA works extensively with property and business owners, churches and schools, civic groups, special improvement taxation districts, and governmental entities, and appreciates the opportunity to speak at meetings.  In some neighborhoods where additional grant or supplemental money may be applied, official Project NOLA crime camera kits may be provided free of charge or at even lower discounted pricing,  and/or professional install may be provided free of charge."

In other words, ProjectNOLA is using churches, schools, civic groups and grants to convince the public to spy for them.

Mr. Lagard is the Executive Director of ProjectNOLA and is also a consultant to the FBI, DEA, ATF and DHS.

In other words, Mardi Gras, Bourborn Street and all of New Orleans has been turned into America's largest spying network.