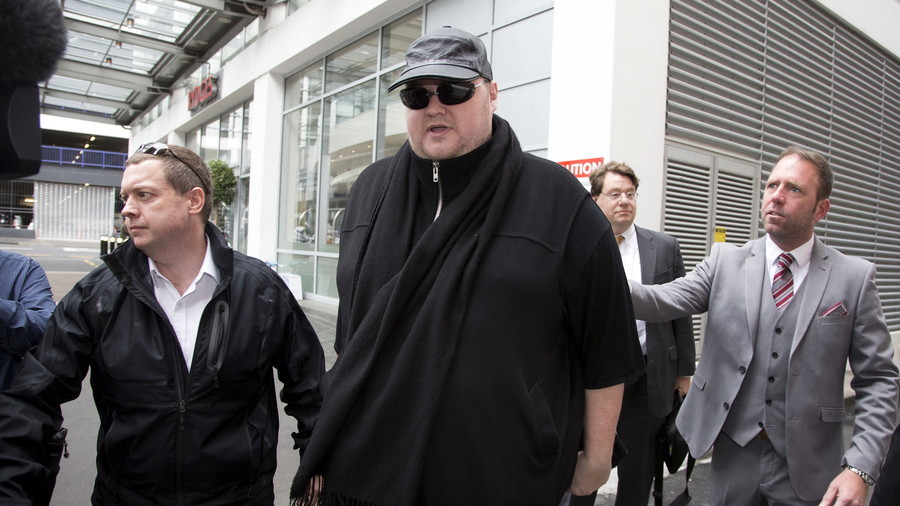 Kim Dotcom, German Internet entrepreneur, best known for founding the Megaupload file-sharing site © Nigel Marple / Reuters
New Zealand has moved a step closer toward extraditing Kim Dotcom, after the Court of Appeal ruled on Thursday in favor of the US case. Dotcom has vowed to fight the decision, saying "it has the value of toilet paper."

Thursday's loss has become the third in line for Internet entrepreneur Dotcom. Earlier, his appeal was rejected consecutively by New Zealand's North Shore District Court and the High Court.

In its ruling on Thursday, the Court of Appeal argued that the US case was warranted, as it relied on "available extradition pathways" propped up by "sufficient evidence."

A German national, Dotcom, founder of the now-defunct Megaupload filesharing website, has been fighting his extradition since his arrest at his Auckland home in 2012. If handed over to the US, he and his three co-defendants will face charges of copyright infringement and fraud that resulted in damages to record and film studios to the tune of over $500 million.

Dotcom has slammed the decision, arguing that "the Court's interpretation of the relevant copyright provisions cannot be right" and it creates a dangerous precedent that would make Internet providers criminally liable "for the misuse of their services by users, as it claimed against me."

Dotcom was "extremely disappointed" by the court's stance, and, without mincing words, he dismissed it as being "in complete denial of the legislative history and intention of the Copyright Act."

"Therefore it has the value of toilet paper," he tweeted.

My statement about the disappointing judgement by the NZ Court of Appealhttps://t.co/7NFqGoSWIl

A judgement in complete denial of the legislative history and intention of the Copyright Act. Therefore it has the value of toilet paper. We will now appeal to the Supreme Court.

Despite his third failure in the New Zealand courts, Dotcom seems to be confident that the Supreme Court, the court of last resort in his case, will take his side.

"Time for the Supreme legal minds to sort this mess," he stated.

It’s funny that the top legal minds in New Zealand can’t agree what the law actually says in my case.
3 Courts and 3 different views

Time for the Supreme legal minds to sort this mess 😎

While, from the legal point of view, Dotcom's future is looking bleaker and his surrender to the US is looking more likely, just several months ago Dotcom declared his extradition case was over. He claimed this after a Human Rights Review Tribunal in March ruled that New Zealand's former attorney general unlawfully turned down Dotcom's request to 28 government ministers and their departments for information privacy.

"What does the Human Rights Tribunal Judgement mean for my Extradition case? It is OVER!" Dotcom wrote at the time.