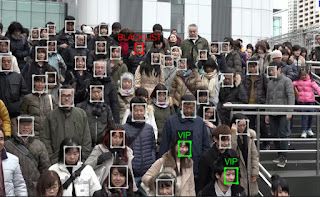 For years, I have been warning people about facial recognition in retail stores, but this story might convince you to avoid retail stores altogether.

A recent article in Biometric Update. com (BU) reveals that retail stores have a master plan to convince Americans to accept facial biometrics.

BU interviewed four facial biometric company CEO's and what they revealed is frightening.

The article starts off innocuously enough by telling us that U.S. retail biometrics is used primarily in loss-prevention but things quickly take a turn for the worse.

BU's interview with FaceFirst CEO Peter Tripp is especially disconcerting, as he reveals how retailers plan to use a "facial recognition opt-in environment."

“There is another step though that exists which has more to do with consumer loyalty, and consumer experience, that is not quite as expensive an endeavor, and I think there are lots of folks looking at ways of doing that in a friendly opt-in environment, where privacy is not the cornerstone issue, Tripp said."

If any of this sounds familiar its because they are doing the exact same thing with digital drivers licenses.

Biometrics companies are trying to convince Americans to accept digital drivers license by tying them to loyalty rewards programs.  Last year the Lincoln Motor Company installed "complimentary" TSA PreCheck biometric scanners in all their new vehicles so customers can get through airport and sport stadium check-in lines quicker.

According to a recent ZDNet article a new partnership between SureID a biometric fingerprinting company and Robbie.AI a facial recognition biometric company "could create a national biometric database."

"Adding facial recognition from Robbie.AI gives the two firms the building blocks of a nationwide biometric database that could be used in a number of settings, from retail authentication and employment verification to more speculative applications like driver-identification for keyless self-driving cars or even user recognition in future robotic platforms."

"As technology emerges and companies adopt more sophisticated forms of security, it will be crucial for safety and security to authenticate the real identity of technicians and consumers," says Ned Hayes, General Manager at SureID.

BU's article reveals how retailers plan to identify every customer.

Whoo.ai CEO Arturo Falck said,  "Once companies are using this type of technology for crime prevention purposes, there’s no reason why they should not be using it for upselling their customers.”

A company called BiteKiosk wants restaurants to use their self-service facial recognition kiosks to increase profits and offers customers food discounts as an incentive to use them.

Falck said, loyalty rewards could be used to convince the public that facial recognition is not that bad. “It is a way for the businesses to turn what could potentially be bad public relations into engagement opportunities.”

BU admits that loyalty rewards are a scam.

"Companies participating in the scheme can offer app users incentives to opt-in, as well as loyalty rewards or discounts on particular items they may be interested in. The back-end uses an open REST API for companies to integrate it with their facial recognition systems."

Goode admits that facial recognition is really about creating a national biometric database.

“China, India, Russia, parts of Latin America and Japan have been using centralized biometric databases for a long time."

Oddly or perhaps by design their is no mention of retailers creating facial recognition watchlists.

So what is their master plan?

Tripp revealed that retailers are planning on a "gradual expansion of facial recognition."

The BU article goes on to say that 'retailers have been slowly installing facial recognition in back-of-house deployments which builds familiarity not only with retailers but with the staff as well.'

The article ends on a disturbing quote, "The infrastructure in this case is people’s perspective. That can change quickly."

Our perspectives had better change or corporate America will buy everyone's identity using rewards programs and the ability to skip check-in lines.

Sunday, November 11, 2018 - National biometric database could be on the way (and in private hands)

When a national fingerprinting company joins forces with a startup that authenticates identity using AI-based facial recognition and behavioral prediction in natural settings, the future of human identification tech starts to look an awful lot like sci fi. That's the the new reality as SureID, a biometrics and fingerprinting firm, partners with Robbie.AI, a Boston-based startup, on R&D that could result in the United States' first nationwide biometrics gathering system.

So far, the public doesn't know where or how the cameras are being installed. The US Drug Enforcement Administration (DEA) and Immigration and Customs Enforcement (ICE) have hidden an undisclosed number of covert surveillance cameras inside streetlights around the country, federal contracting documents reveal.

Friday, November 9, 2018 - The Chinese Government Identifies Citizens By The Way They Walk

Communist Chinese authorities are using “gait recognition” technology to identify Chinese civilians by the way that they walk. The new technology uses body shapes and movement to identify people even when their face is not in the camera.