It begins with dramatic music, edited in for effect.

Then stills of the manifesto posted by the gunman in New Zealand before his terror attack, highlighting and translating the sections targeting Turkey.

The video streamed live by the attacker comes next, shooting his way into a Christchurch mosque, before blurred images with the sound of automatic gunfire.

And then a cut to Turkey's opposition leader, Kemal Kilicdaroglu, talking of "terrorism rooted in the Islamic world".

The crowd boos wildly, galvanised by President Recep Tayyip Erdogan, who has now shown the footage during at least eight election rallies. 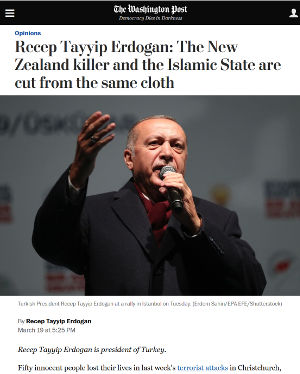 Erdogan compares the Australian terrorist who killed 50 people in a mosque in Christchurch with the Islamic State:

The Christchurch massacre’s alleged perpetrator attempted to legitimize his twisted views by distorting world history and the Christian faith. He sought to plant seeds of hate among fellow humans.
...
In this regard, we must establish that there is absolutely no difference between the murderer who killed innocent people in New Zealand and those who have carried out terrorist acts in Turkey, France, Indonesia and elsewhere.

There is of course a big difference. While the murderer in New Zealand, Brenton Harrison Tarrant, visited fascist groups in many countries including Turkey,  he was not part of a larger organization or even a terrorist state. There is no evidence so far that he had any big sponsors.

The Islamic State and the ten-thousands of fanatics who established it had by contrast a large sponsor who enabled its killings.

His name is Recep Tayyip Erdogan.

Researchers of the International Center for the Study of Violent Extremism (ICSVE) recently interviewed an ISIS emir, Abu Mansour al Maghrebi, who essentially served as the ISIS ambassador to Turkey. Abu Mansour, an electric engineer from Morocco, was captured 1.5 years ago and is held in Iraq:

“My job in Raqqa was dealing with the international cases,” Abu Mansour al Maghrebi recalls of his three years serving ISIS. “My issue [duties] was our [Islamic State’s] relationship with Turkish intelligence. Actually, this started when I was working at the borders,” he explains, harking back to the first job he undertook for ISIS before becoming an ISIS emir and, seemingly, their ambassador to Turkey.
...
“[My job was] guarding the borders between Syria and Turkey and to receive the fighters,” Abu Mansour explains, smiling at being recognized as more powerful than he was originally conveying. “I oversaw reception at Tal Abyad, Aleppo, Idlib, all their borders,” he answers.

Some 40,000 foreign fighters came to Syria via Turkey. Most of them joined the Islamic State. It was also Turkey that cared for wounded ISIS fighters:

“There were some agreements and understandings between the Turkish intelligence and ISIS emni about the border gates, for the people who got injured,” Abu Mansour continues. “I had direct meeting with the MIT [the Turkish National Intelligence Organization], many meetings with them.”
...
When we ask who exactly in the Turkish government was meeting ISIS members, he states, “There were teams. Some represent the Turkish intel, some represent the Turkish Army. There were teams from 3-5 different groups. Most meetings were in Turkey in military posts or their offices. It depended on the issue. Sometimes we meet each week. It depends on what was going on. Most of the meetings were close to the borders, some in Ankara, some in Gaziantep.”

Turkish intelligence sent cars to the border to accompany the ISIS ambassador to the various meetings in Turkey. These meetings included high level people:

[A]s he continues, we learn that his “diplomatic” reach on behalf of ISIS extended even to the president of Turkey himself. “I was about to meet him but I did not. One of his intelligence officers said Erdogan wants to see you privately but it didn’t happen.”

For Turkey ISIS was useful to suppress the Kurds and to achieve Erdogan's bigger aim of annexing the north of Syria to Turkey.

There are many more details in the interview about Turkish support for ISIS. Some of them may be wrong but most are supported by a large volume of other reporting. Foreigners reached the Islamic State through Turkey. Its weapons and other supplies came from their. ISIS' main income source was oil that Turkey bought. There was direct coordination between Turkey and ISIS in several large operations against the Syrian state.

Without Turkish support the Islamic State in Syria could not have been formed or existed.

That Jeff Bezos' blog, the Washington Post, allows Erdogan to spew lies about Turkey's relations and his personal support for ISIS is bad.

That it does so shortly before the strongly contested elections in Turkey is even worse. Why is it promoting a Muslim Brotherhood fanatic opposed by a secular opposition?

Last year the Committee to Protect Journalists found that Turkey incarcerates more writers than any other state:

Even as Turkish President Recep Tayyip Erdoğan has been the fiercest critic of Saudi Arabia for the murder of Khashoggi, his government continued to jail more journalists than any other on the planet. [...] For the third consecutive year, every journalist imprisoned in Turkey is facing anti-state charges.

The Washington Post's slogan, seen above Erdogan's op-ed, is "Democracy Dies in Darkness". The hypocrisy of publishing his screed stinks to high heaven.