How armies of fake accounts 'ruined' Twitter in the Middle East

In this series of articles, Al Jazeera examines how Twitter in the Middle East has changed since the Arab Spring.

Government talking points are being magnified through thousands of accounts during politically fraught times and silencing people on Twitter is only part of a large-scale effort by governments to stop human rights activists and opponents of the state from being heard.

It was called Diavolo, "devil" in Italian.

According to the ads, Diavolo was a program to "automate repetitive tasks such as opening certain web pages or copying and pasting data".

One ad painted a clearer picture: "This program sends tweets to any number of accounts you have added to [TweetDeck]", it read, accompanied by helpful screenshots of a TweetDeck filled out with dozens of Twitter accounts.

In short, Diavolo was a quick-and-easy way to manipulate Twitter, the social media platform that was once hailed as a tool of liberation and transparency for the oppressed during the 2011 Arab Spring.

By 2015, the tables had turned and Twitter was inundated with fake accounts and propaganda peddlers.

Diavolo was created as a shortcut at work by an employee of a Saudi-based group of television channels who built it to artificially increase engagement for the networks' tweets.

"[The channels] wanted their videos to reach as many viewers as they could. So, they published them on Twitter, and my job then was to create so many Twitter accounts and publish the videos through each account," Diavolo's creator, who asked to remain anonymous to avoid repercussions from his company or government agencies, told Al Jazeera.

According to him, the company knew fake accounts were being used to increase their Twitter reach. He said he decided to create Diavolo because he did not want to keep retweeting manually.

"I built the small program in less than a week … I did not have to sit in front of my computer," he said, "The program was doing the job."

Eventually, he decided to sell Diavolo because it worked better than he expected.

"I decided to sell it to other people to get some more money. But after Twitter made changes, making it impossible to automate work, I removed the program from my account and deleted it from my computer," he said.

Al Jazeera was able, with the help of an academic researcher who examines Twitter manipulation, to ascertain the accounts used by the Saudi-based channels did show signs of automation in 2015.

However, the number of accounts that used the tool was 40 times greater than its owner claimed.

About 17,000 accounts used Diavolo, not 400, with some created as late as December 2016, proving the tool was used for much longer than claimed with the vast majority tweeting links to videos connected to the television channels.

Most of the accounts have since been suspended by Twitter.

Al Jazeera also found Diavolo's developer selling Twitter followers on a website - 5,000 followers for $10 - indicating he controlled more than just the 400 accounts he claimed he used.

When confronted with these findings, the man no longer responded to Al Jazeera's questions.

Over the past couple of years, Twitter's bot problem has repeatedly come to the fore, most notably following alleged Russian interference in the 2016 US presidential elections and other democratic processes such as the Brexit referendum.

Occasionally, Twitter will announce it has deleted a slew of fake accounts from Iran or Venezuela, but little attention is paid to social media sites in the Arab world.

In the Middle East region, Twitter went from being a tool of liberation during the Arab Spring to a platform rife with propaganda and fake accounts.

Bot armies have invaded Arabic-language Twitter in recent years, inundating it to the point that any conversation about political or other contentious topics is fraught with anger and confusion.

"Controversial" tweets are drowned out by hundreds of suspicious, anonymous accounts that seem to exist only to push a certain narrative. 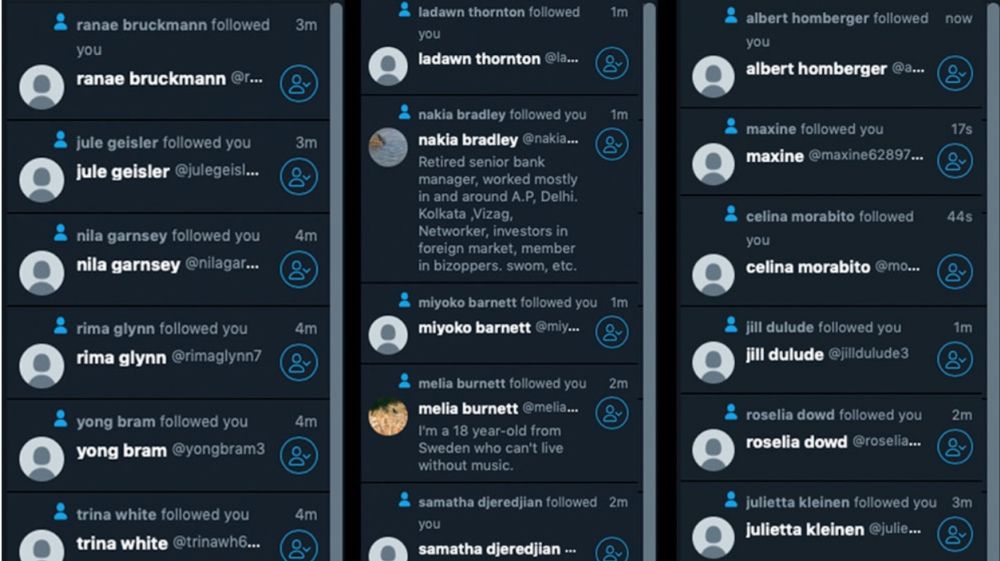 It is still easy and cheap to circumvent Twitter's automated systems and run bot accounts, in spite of Twitter's promises to remove them.

Dozens of websites, in languages from English to Arabic and Russian, offer products to artificially boost the number of followers or retweets a post gets.

Al Jazeera contacted one of the sellers and was able to buy 1,000 fake followers for $16 in a process that took a couple of hours to complete.

"I can create up to 2,000 followers per day, followers, retweets, website views. I sell all of it," the vendor, who identified himself as Othmane, a 26-year-old man from Morocco, told Al Jazeera.

Othmane said he started selling fake accounts in 2013 when he was a college student.

While bot-makers such as Othmane can still trick Twitter's systems, he acknowledges it has become harder recently.

"Twitter has made it more difficult [to make fake accounts]. Every time we change our methods of verification for fake accounts to be compatible with Twitter policies," he said.

Tricking those safeguards, even if only briefly, is still easy, Othmane proved.

Half an hour after paying the $16, dozens of accounts started following an account name that Al Jazeera provided to Othmane.

Those bot accounts also retweeted many other users around the world, proving that creating and controlling fake accounts is a thriving online business. After payment, more than 1,000 fake followers were added to the provided account within hours [Yarno Ritzen/Al Jazeera]

Over the following days, most of the accounts Othmane created were removed by Twitter - but even this can be avoided by anyone willing to spend more.

Instead of just buying followers or retweets, whole accounts can be bought: email addresses, login details and any information needed to build up a personal Twitter-bot army.

Websites selling these products are only a Google search away, offering everything from accounts with hundreds of thousands of followers for up to $2,000, to brand new, Russian-made Twitter accounts for as little as $0.18 apiece.

Even older accounts, from as early as 2008, sometimes even with so-called "verified" ticks, can be bought for anyone willing to spend a bit more money.

All that needs to be done then is automating the messages these newly bought accounts send out, a task that takes just hours and yields an army of bots, ready to march.