Leave it to Zendrive to create a safe driving app that can turn your smartphone into an insurance surveillance device.

Their video claims that they do not track or identify individual drivers, but towards the end of the video they boast that "it is easy to identify, coach and improve unsafe drivers."

Their "How It Works" section reveals how Zendrive uses a person's own smartphone to measure driving behavior, detect collisions, risky phone use, aggressive driving, distracted driving, and more.

How can they do all of that and claim that they do not track individual drivers?

I will let their own data speak for itself.

Despite using the names of Hollywood actors and actresses, Zendrive's "Drivers Dashboard" demo section shows just how easy it would be for insurance companies to identify individual drivers.

If Zendrive is not about tracking and profiting off of so-called unsafe drivers then why is Atlas Financial Holding so excited?

“Granular analytics at the driver level enable us to quantify potential risk with a level of precision that would not otherwise be available,” Scott Wollney CEO of Atlas Financial Holdings said.

I think Zendrive's CEO, Jonathan Matus said it best, “by working together, we can enhance economic value for insurance companies." And that is what this app is really all about.

Their app would allow insurance companies to "enhance their economic value" by tracking everything a driver does through their customers smartphones.

Earlier this year, Zendrive had the audacity to make a game out of tracking college student driving during March Madness.

"March Madness is officially here! 68 basketball teams will fight in a fierce 21-day single-elimination tournament – only this year, we’re turning up the competition. Our inaugural 2019 Driver Safety Bracket will accompany the tournament action, ranking each school based on their level of road safety. The winner will be the school with the safest drivers over the course of the three-week tournament!" 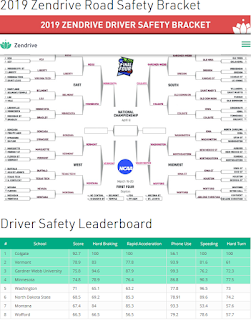 
What sort of things did Zendrive track?

Using our database of over 150-billion miles of driver behavior data, our school safety bracket will score each school using these five safety stats:
Zendrive used student driver data collected within a 10 mile radius of each of the 68 universities that participated in the 2019 March Madness NCAA tournament.

Even though Zendrive claims their data is anonymized, how hard do you think it would be for police to use license plate readers and surveillance cameras to match students to Zendrive's unsafe driving scores?

More importantly how long will it be before police use Zendrive to issue "unsafe" drivers a citation or for insurance companies to raise a person's rates based on their Zendrive scores?

Zendrive got one thing right: this is Madness.

Since when does spying on everyone in a 10 mile radius during March Madness become a game? And why would colleges go along with it?

If you think your auto insurance bill was high before, just wait for Big Brother's new "behavior-based insurance" to become a reality.