Huge blazes were reported at two oil facilities in Saudi Arabia owned by Aramco. While Saudi authorities refused to assign blame, media outlets like the BBC immediately began insinuating either Yemen's Houthis or Iran were responsible. 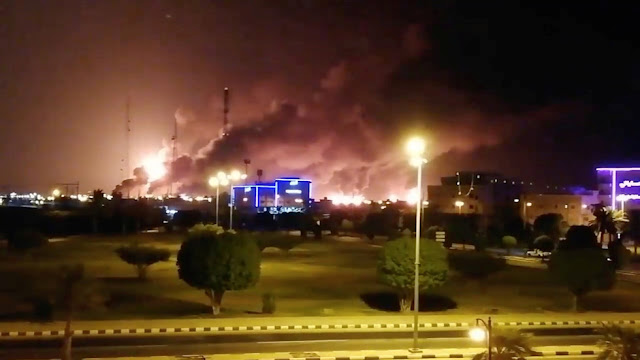 The BBC in its article, "Saudi Arabia oil facilities ablaze after drone strikes," would inject toward the top of its article:

Iran-aligned Houthi fighters in Yemen have been blamed for previous attacks.

Following an ambiguous and evidence-free description of the supposed attacks, the BBC even included an entire section titled, "Who could be behind the attacks?" dedicated to politically expedient speculation aimed ultimately at Tehran.

The BBC would claim:

Houthi fighters were blamed for drone attacks on the Shaybah natural gas liquefaction facility last month and on other oil facilities in May.

The Iran-aligned rebel movement is fighting the Yemeni government and a Saudi-led coalition.

Yemen has been at war since 2015, when President Abdrabbuh Mansour Hadi was forced to flee the capital Sanaa by the Houthis. Saudi Arabia backs President Hadi, and has led a coalition of regional countries against the rebels.

The US and Saudi Arabia vs. MENA

The war in Yemen was a result of US-backed regime change operations aimed at Yemen - along with Tunisia, Algeria, Libya, Syria, and Egypt - starting in 2011.

Major hostilities began when the client regime installed by the US was ousted from power in 2015. Since then, the US and its Saudi allies have brutalized and ravaged Yemen triggering one of the worst humanitarian crises of the 21st century. 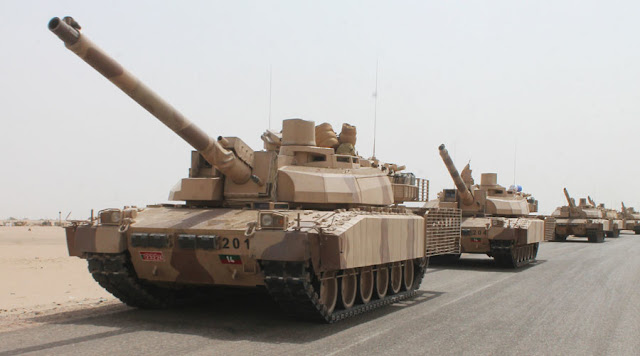 The UN's own news service in an article titled, "Humanitarian crisis in Yemen remains the worst in the world, warns UN," would admit:

An estimated 24 million people – close to 80 per cent of the population – need assistance and protection in Yemen, the UN warned on Thursday. With famine threatening hundreds of thousands of lives, humanitarian aid is increasingly becoming the only lifeline for millions across the country.

The cause of this catastrophe is the deliberate blockading of Yemen. Reuters in its article, "U.N. aid chief appeals for full lifting of Yemen blockade," would report:

The United Nations appealed on Friday to the Saudi-led military coalition to fully lift its blockade of Yemen, saying up to eight million people were “right on the brink of famine”.

Essentially - the United States - with the largest economy and most powerful military in the world - along with its allies in Riyadh - are attempting to erase an entire nation off the map through bombings, starvation, and disease.

Saudi aggression carried out on behalf of Washington isn't confined only to its war on Yemen. Saudi Arabia has played a key role in radicalizing, arming, and funding US-backed militants attempting to overthrow the government of Syria as well as extremist groups bent on destabilizing Iraq and even Iran itself.

Likewise, the militants who overran Libya in 2011 were drawn from extremist networks funded for decades by Riyadh. Thus, Saudi Arabia is not merely menacing neighboring Yemen, it is menacing the entire Middle East and North Africa (MENA) and even beyond.

The BBC's recent article attempting to portray Saudi-Yemeni hostilities as a tit-for-tat conflict rather than Yemen's desperate struggle for survival is yet another illustration of not only the West's hypocrisy in terms of upholding or in any way underwriting human rights, but also the Western media' complicity in advancing this hypocrisy.

Saudi Arabia is no victim.


If the US can predicate the invasion of Iraq and the overthrow of its government on deliberately false claims of possessing "weapons of mass destruction," wouldn't Yemen and its allies be justified in using any means possible to attack and undermine Saudi Arabia's fighting capacity as it and its US allies openly carry out a war of aggression unequivocally condemned by the UN itself?

Houthi fighters or Iran would both be well within their rights to strike at the economic engine driving what even the UN has repeatedly declared as an illegal war of aggression waged by Saudi Arabia and its Western sponsors against the nation and people of Yemen.

Unfortunately, provoking such attacks - however justified - is key to US machinations toward igniting an even wider and more destructive regional conflict.

The alleged attacks on Saudi oil facilities mean one of two things.

Either it is indeed retaliation against Saudi Arabia for its criminal activities across the region - showcasing new military capabilities raising the costs for Riyadh to continue down its current foreign policy path - or it was a staged provocation that will be used by the US to station yet more military forces in Saudi Arabia and to ratchet up tensions with both Iran to the east and Yemen's Houthis to the south.

The recent departure of US National Security Adviser John Bolton led many to believe the US may be changing tack on its foreign policy - particularly toward Iran. However, it was much more likely a means of portraying the US as a "peacemaker" ahead of another round of attempts by the US to escalate tensions with Iran and if at all possible, trigger a wider conflict long sought by US special interests for years.

The United States is sending hundreds of troops to Saudi Arabia in what is intended as the latest show of force toward Iran, two Defense Department officials said Wednesday.

The roughly 500 troops are part of a broader tranche of forces sent to the region over the past two months after tensions between Washington and Tehran escalated.

Since May, a spate of attacks have left six oil tankers damaged in the Gulf of Oman, with Washington accusing Tehran of inciting them. Iranian officials have denied that claim. The downing of an American drone in June by an Iranian surface-to-air missile only heightened tensions, prompting President Trump to approve military strikes against Iran before abruptly pulling back.

With a growing number of US troops in Saudi Arabia, the US will be well positioned to launch offensive attacks against Iran in any future war, as well as carry out defensive operations to protect Saudi Arabia and essential infrastructure from retaliation.

This most recent alleged attack, along with a series of questionable incidents in the Persian Gulf have afforded the US justification - however tenuous - to further build up its military presence along Iran's peripheries it otherwise would have had to carry out in an openly provocative and unjustified manner.

It was just these sort of provocations that were described for years by US policymakers who sought to "goad" Iran into war with the West.

For example, in a 2009 Brookings Institution paper titled, "Which Path to Persia? Options for a New American Strategy toward Iran," US policymakers would openly admit (emphasis added):

However beneficial this campaign of provocations may be for US foreign policy objectives, neither possibility - a provoked reaction from the Houthis or Iran or a staged attack organized by the US - bodes well for those ruling in Riyadh.

For Washington's allies - the fact that they are just as likely - or more likely - to receive a devastating attack from the US itself than from their actual enemies - all to trigger an even more devastating war they will find themselves in the middle of - is added incentive for nations like Saudi Arabia to take the extended hands of future potential allies like Russia and China, and begin walking down a new and different path.

Only time will tell how far Saudi Arabia is willing to go down its current path, and how much they are willing to risk doing so, before they join the growing list of nations departing from America's unipolar global order and choosing a more equitable multipolar future.

Whether the US and Saudi Arabia finally provoked genuine attacks from nations they've purposefully goaded for years, or staged the attacks themselves, a dangerous course toward war has been set - and a course the rest of the world must now work hard to steer away from.