How Russian And Iran Beat Their Opponents' Strategies

Over the last decades Russia and Iran both needed to develop means to protect themselves against an ever growing threat from the United States and its allies. Both found unique ways to build deterrence that fit their situation.

Neither the U.S. nor its allies reacted to those developments by adopting their strategies or military means. It is only recently that U.S. woke up to the real situation. The loss of half its oil export capacity may finally wake up Saudi Arabia. Most other U.S. allies are still asleep.

When NATO extended into east Europe and the U.S. left the Anti-Ballistic-Missile Treaty Russia announced that it would develop countermeasures to keep the U.S. deterred from attacking it. Ten years later Russia delivered on its promise.

It had developed a number of new weapons that can defeat the ballistic missile defense the U.S. installed. It also put emphasis on its own air and missile defense as well as on radar and on electronic countermeasures that are so good that a U.S. general described as "eye-watering".

All this allowed Putin to troll Trump by offering him Russian hypersonic missiles. As we analyzed:

Trump is wrong in claiming that the U.S. makes its own hypersonic weapons. While the U.S. has some in development none will be ready before 2022 and likely only much later. Hypersonic weapons are a Soviet/Russian invention. The ones Russia now puts into service are already the third generation. U.S. development of such missiles is at least two generations behind Russia's.

That Russian radar can 'see' stealth aircraft has been known since 1999 when a Yugoslav army unit shot down a U.S. F-117 Nighthawk stealth aircraft. Russian air and missile defense proved in Syria that it can defeat mass attacks by drones as well as by cruise missiles. U.S.-made air and missile defense in Saudi Arabia fails to take down even the primitive missiles Houthi forces fire against it.

Yesterday, during a press conference in Ankara with his Turkish and Iranian colleagues, Putin trolled Saudi Arabia (video @38:20) with a similar offer as he had made to Trump:

Q: Does Russia intend to provide Saudi Arabia with any help or support in restoring its infrastructure?

Putin: As for assisting Saudi Arabia, it is also written in the Quran that violence of any kind is illegitimate except when protecting one’s people. In order to protect them and the country, we are ready to provide the necessary assistance to Saudi Arabia. All the political leaders of Saudi Arabia have to do is take a wise decision, as Iran did by buying the S-300 missile system, and as President Erdogan did when he bought Russia’s latest S-400 Triumph anti-aircraft system. They would offer reliable protection for any Saudi infrastructure facilities.

Vladimir Putin: It is up to them to decide.

Erdogan, Rouhani and Putin all laughed over this exchange.

That is the reason why Saudi Arabia has more than 350 modern fighter planes but only a few medium and long range air defense systems that root back to the 1970s.

The Saudi air defense is only able to protect certain economic and social centers. Most of its borders and its military bases are not covered.

Saudi air defense as documented by Amir at Iran GeoMil. 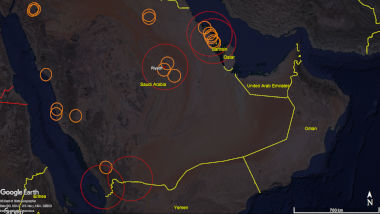 Moreover the protection it has in place is unidirectional. The red circles designate the theoretical reach of the U.S. made PAC-2 air defense systems installed at their center. But the real reach of these systems only cover a half-circle. The PAC-2 and PAC-3 systems are sector defenses as their radars do not rotate. In the case of the Saudis those radars only look towards the north-east to Iran. That left the crude oil processing plant in Abqaiq completely unprotected against attacks from any other direction. Neither Saudi Arabia nor the U.S. know from where the attack really came. 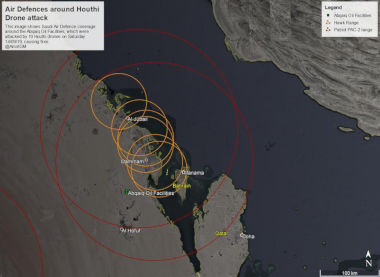 The Russian experience against the U.S. directed drone swarm attacks against its airbase Hmeymim in Syria showed that short range air defenses and electronic countermeasures are the best defense against mass drone and cruise missile attacks.

What the Saudis need are the Russian Pantsyr-S1 short range air defense, dozens of them, and the Krasukha-4 electronic warfare system. The Russian may well offer at least the first item. But would the U.S. allow the Saudis to buy them?

Saudi Arabia, like the U.S., never took its opponents serious. It bombed Yemen to smithereens and never expected to be hitten back. It long rallied the U.S. to wage war on Iran but took little measures to protect itself from an Iranian counterreaction.

After the long range attack from Yemen in August it was warned that the Houthi's missile reach had increased. Saudi Arabia ignored the warning and it took zero notable measures to protect Abqaiq processing center which is a choke point for half its income.

Iran, in contrast, developed its weapons along an asymmetric strategy just as Russia did.

Iran does not have a modern airforce. It does not need one because it is not aggressive. It has long developed other means to deter the U.S., Saudi Arabia and other opponents in the Middle East. It has a large number of self developed medium range ballistic missiles and a whole zoo of short to medium range drones and cruise missiles. It can hit any economic or military target within their 2,000 kilometer reach.

It also makes its own air defenses which recently enabled it to take down an expensive U.S. drone. Here is General Amir Ali Hajizadeh, the commander of IRGC's Aerospace Force, explaining how that was done (video, engl. subs).

Iran developed relations to friendly population groups in other countries and trained and equipped them with the necessary defensive means. These are Hizbullah in Lebanon, various groups in the Syria, the PMG/Hashd in Iraq, the Houthi in Yemen and Islamic Jihad in Gaza.

None of these groups is a full proxy for Iran. They all have their own local politics and will at times disagree with their big partner. But they are also willing to act on Iran's behalf should the need arise.

Iran developed a number of weapons exclusively for its allies that differ from the ones it itself uses. It enables its partners to build those weapons themselves. The cruise missile and drones that the Houti in Yemen use are different from the one Iran uses for its own forces.

Iran has thereby plausible deniability when attacks like the recent one on Abquiq happen. That Iran supplied drones with 1,500 kilometer reach to its allies in Yemen means that its allies in Lebanon, Syria and Iraq and elsewhere have access to similar means.

The Saudis long failed to take Iran's counter strategy into considerations just like the U.S. failed to consider the Russian one. Both will have to change their aggressive strategies. Both will now have (re-)develop real defensive means.