There's 22 million gallons of nuclear waste under a concrete dome on a Pacific Island, and it's sinking 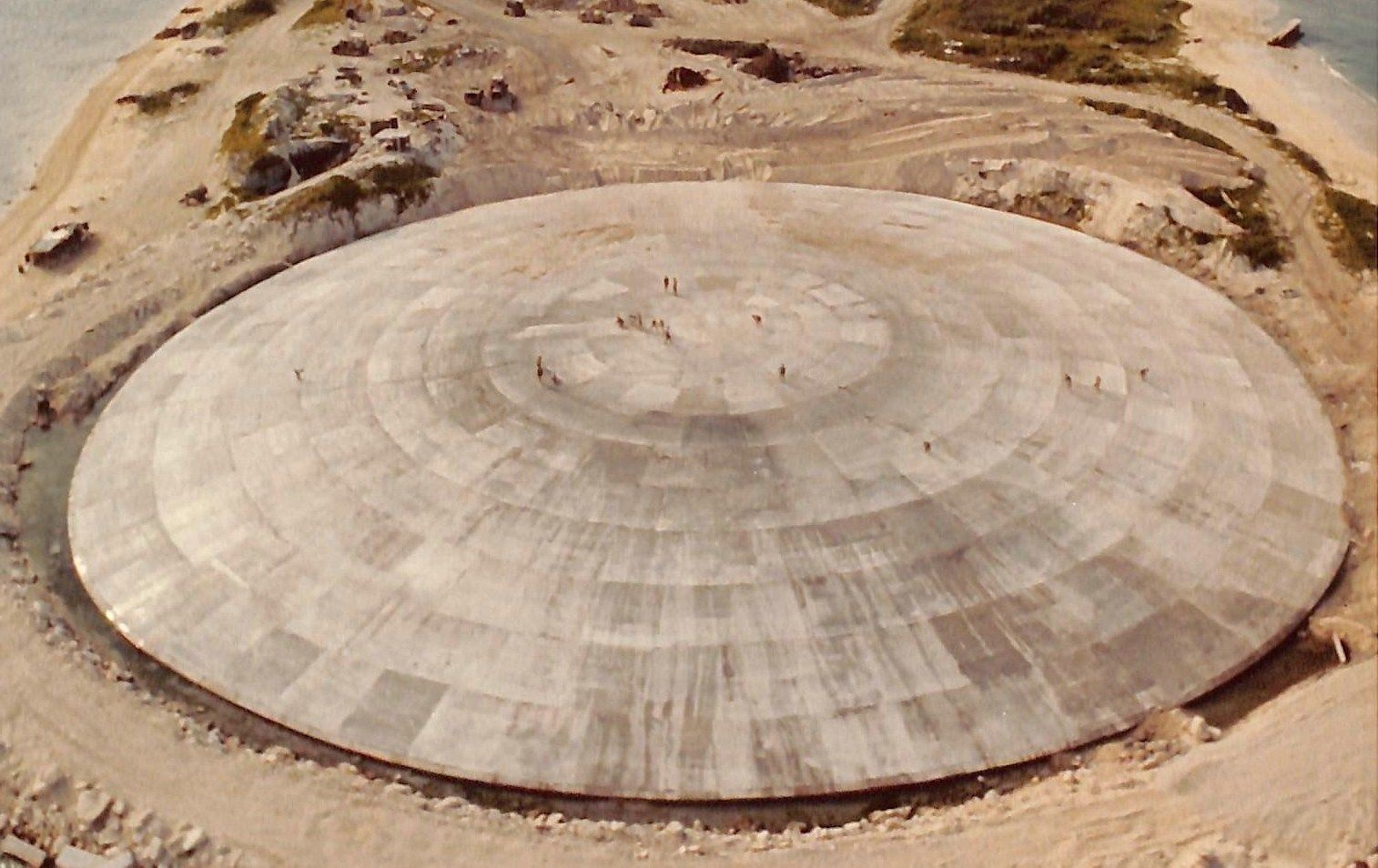 The Los Angeles Times has a harrowing new story about Enewetak Atoll in the Marshall Islands. Japanese forces invaded the small Pacific nation and its residents during World War I, and the United States did the same during World War II under that classic guise of "liberation." But the US was hardly acting altruistically, at the time nor since then. The islands' location made it a prime strategic military base in the Pacific. It was also isolated enough to make it a convenient nuclear testing site—if you disregarded the 72,000 people who lived there, of course.

Between 1946 and 1962, US military experiments produced 108 megatons of nuclear yield in the Marshall Islands— about 80% of the country's total radioactive waste output from nuclear testing. That's the equivalent 1.6 atomic bombs dropped every day for 12 years. And after the US decided to gradually cede control of the land back to the Marshallese people, we just kind of … left it all behind.  We were kind enough to pour a bunch of concrete on top of the 22 million gallons of nuclear waste left behind on one specific island, creating the Runit Dome.

But that dome is still there. And the concrete is starting to crack. And sea levels are rising rapidly, particularly in the Pacific, further accelerating that erosion process. Now the Dome—affectionately and appropriately called "The Tomb" by the locals—is threatening to leach all of that nuclear waste into the land and the ocean.

I realize that an island-sized nuclear waste dump called "The Tomb" in the middle of the Pacific Ocean sounds like some straight-up Godzilla sci-fi shit. But I assure you, this is real. I actually wrote an article about Enewetak Atoll about 4 years ago, as part of a larger campaign about climate change. This new LA Times piece goes much further, however, as it reveals some new details that really pour salt into that gaping Imperialist nuclear wound:

A Times review of thousands of documents, and interviews with U.S. and Marshallese officials, found that the American government withheld key pieces of information about the dome’s contents and its weapons testing program before the two countries signed a compact in 1986 releasing the U.S. government from further liability. One example: The United States did not tell the Marshallese that in 1958, it shipped 130 tons of soil from its atomic testing grounds in Nevada to the Marshall Islands.

Are you kidding me?

U.S. authorities also didn’t inform people in Enewetak, where the waste site is located, that they’d conducted a dozen biological weapons tests in the atoll, including experiments with an aerosolized bacteria designed to kill enemy troops.

Are you fucking kidding me?

How the U.S. betrayed the Marshall Islands, kindling the next nuclear disaster [Susanne Rust/Los Angeles Times]

Image of the Runit Dome via Wikimedia Commons

Thursday, May 30, 2019 - Radioactive Nuclear Dome Leak May Be Poisoning Shellfish In Pacific

Several weeks ago, we reported that U.N. Secretary-General Antonio Guterres sounded the alarm over a large concrete dome constructed 40 years ago in the Marshall Islands to contain radioactive waste from Cold War-era nuclear tests. According to Guterres, the dome - which houses approximately 73,000 cubic meters of nuclear debris on Runit Island, part of the Enewetak Atoll - may be leaking radioactive material into the Pacific Ocean, as the porous ground underneath the 18" thick dome was never lined as initially planned.