The Turkish President Erdogan continues to create enemies for Turkey.

After waging a war on Syria, he has managed to piss off the EU by pushing refugees towards it. He has displeased NATO and the U.S. by installing Russian air defenses. Most Arab countries at the Persian Gulf hate him for his support for Qatar.

Erdogan has allied himself with the with the Government of National Accord (GNA) that rules in Tripoli, Libya. He will now have to take on several additional countries which support the GNA's opponent. 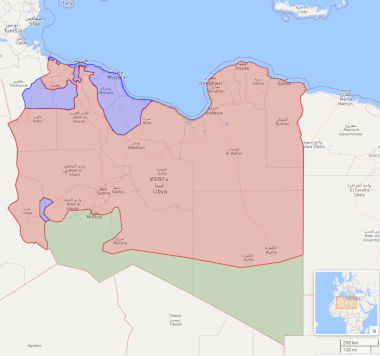 Most of the east and the south and most of the oil of the country is ruled by General Khalifa Haftar, a former CIA asset. Haftar has support from the UAE, Saudi Arabia, Egypt and Russia. A U.S. delegation recently visited him. Nine month ago he started a campaign to eliminate the Muslim Brotherhood controlled GNA around Tripoli and Misrata.

The campaign got stuck even as each side continued to put more and better material onto the ground and into the air. Pilots flying for Haftar are allegedly from the UAE and Egypt. The GNA flies Turkish drones which are likely controlled by Turkish pilots. There are also rumors that Russian mercenaries are involved in support of Haftar.

Both sides lack well trained ground troops in sufficient numbers. At the end of November Erdogan offered a rather curious agreement to the GNA. In exchange for troops from Turkey the GNA would have to agree to a common maritime border between Libya and Turkey.

Fayez al-Sarraj, the Chairman of the Presidential Council of Libya and prime minister of the GNA, agreed. That resulted in this curious map. 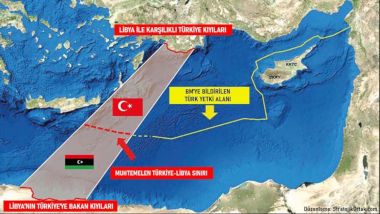 Erdogan then claimed that Turkey has the sole right to economically explore the Mediterranean Sea north of the red and yellow line. He also said that pipelines laid through that area would need Turkish agreement. Egypt, Israel and Cyprus had planned a gas pipeline between their sub sea gas explorations and Greece. (That pipeline is likely a pipe dream as there is too little gas for sale to justify the large investment.)

There have already been intense spats between Cyprus, Israel and Turkey over Turkish drill ships which, accompanied by the Turkish Navy, intruded into Cyprus' exclusive economic zone.

Nautical borders in areas of multiple states can not be drawn unilaterally or by just two parties. The area Erdogan claims is to a large part also claimed by Cyprus and Greece which both have better arguments for legal rights in the area than Turkey. 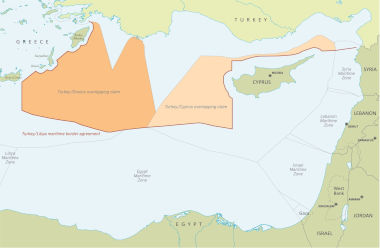 There is another legal problem. The Sikhirat agreement, which was signed in December 2015 under UN auspices and is the legal basis for the GNA, does not give GNA head Sarraj any right to make such an agreement and concession.

The conflict over exclusive economic rights in certain areas can probably be solved at the UN or through international courts. The military part of Erdogan's deal is the real danger:

The deal offers Turkish support for the establishment of a Quick Reaction Force for police and military in Libya, as well as enhanced cooperation in intelligence and in the defense industry. Following the military cooperation deal, Erdoğan said Ankara might consider sending troops to Libya if the Libyan government requested military assistance.

A week ago Erdogan said that he was ready to deploy troops to Libya on short notice. Today rumors appeared in Arab media, still unconfirmed, that Turkish special operations forces landed in Tripoli.

The Libyan war between two Libyan parties will now become a very different beast. Egypt will not tolerate a Muslim Brotherhood led Libya as its neighbor. Before the Turkish support allows the GNA government to defeat Haftar Egypt will intervene. The situation can thereby soon develop into an intense war during which Turkish troops fight on Libyan grounds against the Egyptian military.

Both countries have rich Arab sponsors who can finance a long and intense conflict. Both have lots of material and many many soldiers who they can throw into the fight. The Egyptian side has one advantage. Its long land border allows for easy resupply while Turkey will have to rely on supplies that come by sea and air and can be cut off or at least interrupted.

Such a war could easily become the major international crisis of 2020.