The Coronavirus - No Need To Panic

Bring Out Your Dead by beq
bigger - uncropped

I had a little bird,
Its name was Enza.
I opened the window,
And in-flu-enza.
The Influenza Pandemic of 1918

The picture and the rhyme are from a fifteen year old Moon of Alabama post headlined Bring Out Your Dead. Beq's title for her picture is from a medieval Mounty Pyton sketch (vid) around the 'black death'. We no longer have to fear the plague but every once a while a new virus catches up with humanity.

China is stepping up efforts to stop the spread of a the novel coronavirus 2019-nCoV:

Chinese President Xi Jinping has held a special government meeting on the Lunar New Year public holiday to warn that the spread of a deadly new virus is "accelerating".

The country is facing a "grave situation" Mr Xi told senior officials, according to state television.

The coronavirus has killed at least 41 people and infected almost 1,300 since its discovery in the city of Wuhan.

And from Sunday, private vehicles will be banned from the central districts of Wuhan, the source of the outbreak.
...
Across mainland China, travellers are having their temperatures checked for signs of fever, and train stations have been shut in several cities.

An infected person transmits the virus to X healthy persons. In an epidemic the factor X is greater than 1. For the novel coronavirus the initial factor, also known as R0 or R naught, is 1.4-2.5 which is not especially high.

The basic reproduction number (R0) is the average number of secondary infections generated by one infected person in a totally susceptible population #2019nCoV
...
The claim that "we are now faced with the most virulent virus epidemic the world has ever seen" and that the new coronavirus is 8x as infectious as SARS is completely untrue. Even if the R0 were 3.8 that would be nowhere near a record.

Here is some context w/ a range of R0s: As long as the R0 is over 1 the infection will spread further as each infected person will infect multiple healthy ones who again will infect others. To stop an epidemic R0 has to be brought to under 1. Key is to lower the number of healthy persons an infected person comes into contact with. In 2002-2003 the SARS epidemic started out with an R0 of about 3 and ended with an R0 of 0.4. This was achieved by isolating the sick and, as not all infected persons are immediately recognized, also by lowering the number of contacts people have in their daily life.

China is now rapidly doing both.

The fatality rate of the novel coronavirus is also no reason to panic.

Preliminary R0 (number showing how contagious / transmissible a pathogen is) for #Wuhan #nCoV2019 novel #coronavirus: 1.4-2.5. Here are the figures for other diseases #SARSvirus #MERS & their case-fatality rates to put things in perspective 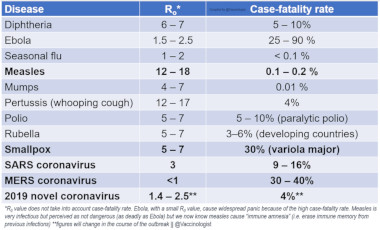 The current  4% case-fatality rate of the coronavirus (which still may increase) is also not especially high. The Spanish Flu pandemic, which began in the U.S., had a fatality rate of about 10%. It was unusual in that it killed mostly young adults. The novel coronavirus seems to be quite usual in that it mostly kills people who are already weakened by other circumstances. The infection is then often the 'last drop in the bucket' that kills a person who already had a medical condition.

People fond of conspiracy theories will speculate that the coronoavirus was spread intentionally or escaped from some laboratory. The neo-conservatives in the U.S. have played with that idea.

But from a scientific perspective that makes little sense. There is no 'race gene' that could be used to safely discriminate between people of a certain heritage and others.

The novel coronavirus is likely a variant of some animal virus that crossed over to a human host. This probably happens way more often than we recognize.