Mike Bloomberg Is A Russian Asset

A careful reading of the news provides that Mike Bloomberg, who had two Russian grandfathers, is Putin's asset.

Rather than impersonating Americans as they did in 2016, Russian operatives are working to get Americans to repeat disinformation, the officials said. That strategy gets around social media companies’ rules that prohibit “inauthentic speech.”

It is Bloomberg, working as a Russian operative, who pays the trolls that repeat disinformation.

The temporary employees recruited by Bloomberg’s camp are given the title “deputy field organizer” and make $2,500 a month to promote his White House bid among their followers. The employees can choose to use campaign-approved language in their posts.

Twitter said the practice violated its “Platform Manipulation and Spam Policy,” which was established in 2019 to respond to Russia’s expansive troll network that was tapped in 2016 to meddle in the U.S. elections. 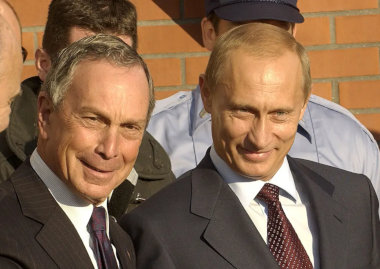 In that closed hearing for the House Intelligence Committee, lawmakers were also told that Sanders had been informed about Russia’s interference. The prospect of two rival campaigns both receiving help from Moscow appears to reflect what intelligence officials have previously described as Russia’s broader interest in sowing division in the United States and uncertainty about the validity of American elections.

Here are Bloomberg's behind the scene machinations which are sowing division and uncertainty about the validity of American elections. This is exactly what Russia wants.

Mike Bloomberg is privately lobbying Democratic Party officials and donors allied with his moderate opponents to flip their allegiance to him — and block Bernie Sanders — in the event of a brokered national convention.
...
It’s a presumptuous play for a candidate who hasn’t yet won a delegate or even appeared on a ballot. And it could also bring havoc to the convention, raising the prospect of party insiders delivering the nomination to a billionaire over a progressive populist.