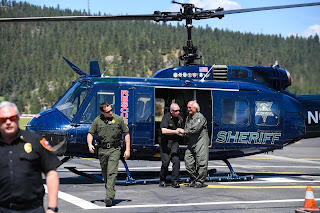 With protests across the country demanding an end to police racial abuse and militarization; a tone-deaf announcement in Spokane, Washington shows how hard it is to change police culture.

"The Spokane County Sheriff’s Office has asked for $300,000 in federal COVID-19 aid funding for a helicopter thermal scanner, which it says could help with social distancing, responding to protests and reducing manpower needed when policing the county."

As author Rebecca White revealed, the sheriff's office has been using thermal imaging to monitor protesters for a decade. A look at the Spokane Regional Air Support Unit website reveals how they use three government surplus helicopters known as “Air-1” for public surveillance. (To find out more about the U.S. Army Bell-OH58 "Kiowa Warrior" attack helicopter click here.)

To illustrate just how tone-deaf the Spokane Sheriff's Department is, their website acknowledges using high-powered/thermal imaging surveillance drones on residents.

"In 2018, the Spokane Regional Air Support Unit created a UAS (unmanned aerial system) program. Currently the unit possesses a DJI Matrice 210 and a DJI Inspire 1 Pro. The Matrice has the capability of carrying two camera systems working independently or together, which allows it to utilize a 20 megapixel, 4K daytime camera as well as a thermal camera."

“As we have experienced staff shortages and as we tried to be careful about social distancing with our troops on the ground, the air support unit is able to give us more technology to evaluate situations with fewer people,” Mielke said.

Mielke's comment about "troops on the ground" and not police officers working the streets, is exactly how this helicopter will be used by law enforcement. Not one American would ever believe police need surplus Army helicopters to enforce social distancing. What they would believe is law enforcement using them to surveil and abuse protesters

Over the past two weeks we have seen DHS, the CBP and the National Guard use helicopters, airplanes and drones to surveil protesters across the country and then deny it. Police fed all the protester footage they collected into a digital network run by DHS called the "Big Pipe."

Where would the money for the Spokane County Sheriff 's $300K social distance monitoring helicopter come from?

Law enforcement wants some of the state's $90 million in CARES funds of course.

As the article explained, Spokane County was the only government in Eastern Washington large enough to receive a direct payment from the U.S Treasury. Of course, the money has to be used by the end of the year and can only be used for COVID-19 related expenses.

"The request for the thermal imaging funds was made during a law and justice presentation to commissioners where Regional Law and Justice Administrator Maggie Yates presented a list of requests from the courts, county attorneys, the jail, sheriff’s office and county clerks office, which say they need technology and additional support so employees can social distance while providing basic services."

How much of the CARES pie does law enforcement want?

"Altogether, those groups are requesting $7 million in CARES funding."

This has to be one of the most tone-deaf excuses law enforcement has used to justify spying on the public that I have seen. Using a pandemic as a smoke screen to purchase a $300K surveillance helicopter is just so maddeningly crazy it defies belief.