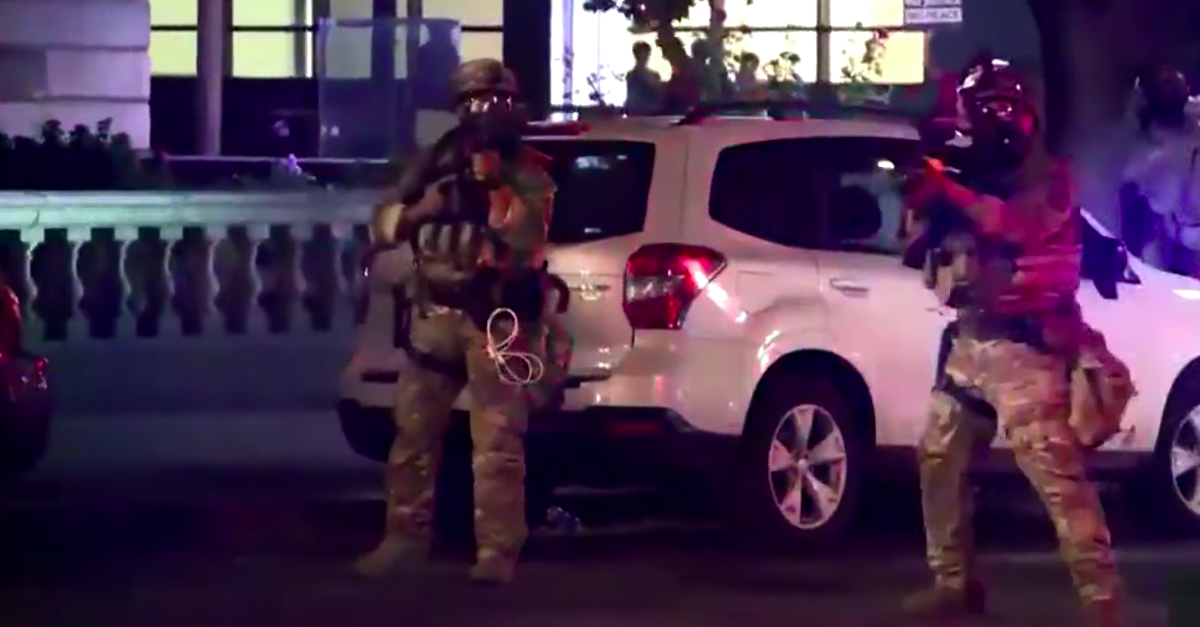 A federal judge in Oregon on Thursday afternoon issued a temporary restraining order (TRO) prohibiting federal officers deployed in Portland from using physical force against news reporters and legal observers documenting the ongoing protests and riots in that city. However, just hours after the ruling, video emerged showing federal troops firing teargas projectiles at — and ultimately hitting — a local journalist with Oregon Public Broadcasting who was recording the ongoing conflict.

Following weeks of unrest, several newspapers and the American Civil Liberties Union (ACLU) last month filed a lawsuit seeking to prevent federal officers from “assaulting news reporters, photographers, legal observers, and other neutrals who are documenting the police’s violent response to protests over the murder of George Floyd.”

In the 22-page temporary restraining order, U.S. District Judge Michael H. Simon enjoined officers from the Department of Homeland Security (DHS), U.S. Marshals Service (USMS), and all agents and employees acting under the direction of the federal government from “arresting, threatening to arrest, or using physical force directed against any person whom they know or reasonably should know is a Journalist or Legal Observer” unless they have probable cause to believe the individual committed a crime.

Simon further explained that federal officers will not be liable for violating the order if journalists are “incidentally exposed” to crowd-control devices after the federal agents have issued “an otherwise lawful dispersal order.”

But despite Judge Simon’s TRO, a video of the demonstrations posted to social media Friday morning appears to show federal officers firing and hitting a local reporter with tear gas projectiles.

The clip, recorded and posted to social media by Oregon Public Broadcasting (OPB) general assignment reporter Rebecca Ellis, shows a line of federal officers in the street marching toward Ellis from approximately one block away. The approaching officers stop approximately 30 yards from where Ellis is standing as a series of whistles begin to sound off. Seconds later, the officers launch at least three projectiles in the direction of Ellis, with one hitting her directly in the hand, knocking her camera to the ground.  Here’s the recording:

“Feds approaching and just got shot in hand trying to film. Don’t think that TRO worked,” Ellis, who had been meticulously documenting the protests for days, wrote in a Twitter post accompanying the video.