Three month ago we reported on documents obtained from of 'Her Majesties Government' in Britain which revealed the intense involvement of the UK government in organizing, financing and propagandizing 'Syrian rebels' since the start of the war on Syria. These programs were coordinated with the CIA's and the Gulf Arab's arming of the various Jihadis:

Most of the documents are detailed company responses to several solicitations from the Foreign Office for global and local campaigns in support of the 'moderate rebels' who are fighting against the Syrian government and people.

The documents lay out large scale campaigns which have on-the-ground elements in Syria, training and arming efforts in neighboring countries, command and control elements in Jordan, Turkey and Iraq, as well as global propaganda efforts. These operations were wide spread.
...
Most of the documents are from 2016 to 2019. They detail the organization of such operations and also portray persons involved in these projects. They often refer back to previous campaigns that have been run from 2011/2012 onward. This is where the documents are probably the most interesting. They reveal what an immense effort was and is waged to fill the information space with pro-rebel/pro-Islamist propaganda.

For any informed person who had watched the development of the war on Syria it was no surprise that such programs existed. But the immense extend of these was really astonishing. Consider what ARK, one of the involved companies run by 'former' British spies, organized as part of a British government 'Strategic Communication' program:

ARK,as a company that has specialised in Syria programming for more than three years, has access to a wide-range of networks in Syria. ARK has trained over 1,400 beneficiaries representing over 210 beneficiary organisations in more than 130 workshops, and disbursed more than 53,000 individual pieces of equipment. This network reaches into all of Syria’s 14 governorates (see map below), including liberated, regime-and extremist-controlled areas, and ranges from the most senior Syrian opposition politicians, to armed groups, civil society organisations and ordinary Syrians. This includes but is not limited to: 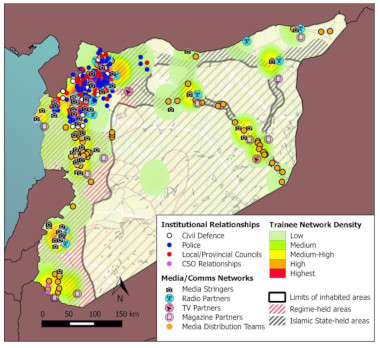 Keep in mind that these were not social programs for the benefit of Syrians but part of a number of clandestine support measure for a violent international Jihadi movement organized to overthrow the Syrian government.

While such a program may be rationalized as part of a war it is astonishing to find that very similar measures are also used against 'friendly' governments.

New documents obtained from the British government and published here and here (complete download here) reveal an intense British 'Strategic Communications' program that is directed against the government of Lebanon.

Those who obtained the files, they use the 'Anonymous' label, introduce the new cache:

How to push people to overthrow their government if they are basically content with its work? Well, your first step is to hire experienced specialists who know how to interfere in internal affairs of other countries and overthrow governments. Which of the British intelligence cutouts created networks of independent journalists, established independent CSOs and used black propaganda to simulate chemical attacks and pave the way for launching missile strikes against an unsuitable country? You've got it right. It's ARK.

On behalf of The Embassy of the United Kingdom in Lebanon in March 2019 ARK updated its 2016 Target Audience Analysis on Understanding the Communications Landscape in Lebanon.

We suggest you closely examine the file as Target Audience Analysis is only its title, while its content is nothing but a manual on nonviolent overthrow of a government in a sovereign state. And the FCO used it as its road map.

ARK's Target Audience Analyses investigated which parts of the Lebanese population could be most easily incited into a revolt against the Lebanese government:

This analysis defined the segment of the population, a Potential Target Audience (PTA), that saw the greatest potential for reform, or to affect positive social change through their own actions. Of all Lebanese, this segment was amongst the most likely to engage if positive forms of civic action, if given the opportunity to do so.

The ARK paper also analyses the 'potential messages' which 'Strategic Communication' could use to incite the target group.

The result of the quite sophisticated analysis points to people who are Christian and Shia, moderately well of, about 30 years of age as the 'Target Audience' which 'Strategic Communication' could push into action by emphasizing their specific grievances, for example lack of jobs, that the group has. It estimates that the thus defined Target Audience includes some 12% of Lebanon's population.

ARK recommended that a British 'Strategic Communication' program to incite a revolt in Lebanon should be kept secret because the Lebanese people hate foreign interference in their affairs.

The British government took up the advice:

Right after ARK prepared the TAA in March 2019, the British Embassy Beirut held a private Stakeholder Event on 11 April 2019. It was dedicated to Lebanon Political Reform Programme.

A presentation from the event explains in very nice language that the British government's objective is "to improve political and economic governance" in Lebanon. It wanted to do this by secretly inciting the 'Target Audience' ARK had defined to protest against the government of Lebanon.

The British government then invited certain private companies to make bids for executing these 'Strategic Communication' projects. The Foreign Office formally did this by issuing an 'Expression of Interests' which included a 'Statement of Requirements.' The companies were to deliver detailed offers by early May 2019 and the contracts awards were to come into effect in July 2019. They would run for 21 month. Each project had a defined maximum budget. The Female Political Participation project would for example have a maximum of 1.2 million British Pounds to waste.

ARK made an offer to execute the youth project as did International Alert in cooperation with Westminster Foundation for Democracy. WYG, a company that supposedly does 'infrastructure development' also made on offer.

ARK and the British Council made an offer on the women engagement project that intends to nurture future female politicians in Lebanon (who will then be under British control).

The offers all include detailed descriptions how the planned projects will be executed. These interesting lectures in social manipulation techniques are available here and here.

Another 'Statement of Requirements' by the British government is for a program titled 'Fostering Social Stability through Strategic Communications'. Its objective is to prevent Syrian refugees in Lebanon from returning home by minimizing the conflicts between the refugees and the local population in Lebanon.

The foreseen tasks include the "selection and day to day management of social media champions" who produce and amplify propaganda content. The contract is again for 21 month and has a maximum value of £2.1 million.

ARK makes a bid on that which reveals that the company had received more than £25 million over the previous years for 'Strategic Communication' black propaganda projects in Syria, Lebanon and Iraq.

Another program is for 'Strategic Communication' activities against Palestinians in Lebanon. Several companies outline in their bids how they would run these projects.

Consider that none of these manipulation programs and project are run under the label of the British government. They are secret. There is no public reporting about them.

But the projects can, at least in part, be seen by their effects:

The 2019–20 Lebanese protests, also known locally as the October Revolution are a series of civil protests that have been taking place in Lebanon. These national protests were triggered by planned taxes on gasoline, tobacco, and VoIP calls on applications such as WhatsApp, but quickly expanding into a country-wide condemnation of sectarian rule, stagnant economy, unemployment that reached 46% in 2018, endemic corruption in the public sector, legislation that was perceived to shield the ruling class from accountability (such as banking secrecy) and failures of the government to provide basic services such as electricity, water, and sanitation.

The protests created a political crisis in Lebanon, with Prime Minister Saad Hariri tendering his resignation and echoing protesters' demands for a government of independent specialists. However, other politicians, who were targeted by the protests, remained in power.

The people in those protests were those defined in the ARK 'Target Analysis'. The messages were exactly those which the various documents and company offers discussed above had planned to use.

It was the British government and the companies run by 'former' spies on Foreign Office money who incited those people to 'regime change' Lebanon.

Some people in Lebanon recognized the protests for what they were. In October 2019 Hizbullah leader Hassan Nasrallah commented on the protests and told his followers not to take part in them:

We will talk about to the objectivity of the current movement. On Saturday, I said that this movement could be used as a basis. I would like to modify that. What started out as a popular, spontaneous, non-partisan movement made up of hardworking poor people and that was not exploited by embassies, is to a great percentage not like that anymore. I am not saying 100%. Today this movement with its daily activities, slogans and positions is no longer a popular and spontaneous movement. Let the young people who are going to the squares and arenas and taking part in the protests. I do not want to ask anything from them. As for the supporters of the resistance, I will talk to them in the end.

Today the movement is led by certain well-known parties, and I do not want to name them. The movement is being led by well-known political forces, different and well-known groups and figures. There are also certain people and institutions leading it. I will talk about this point in details in a bit. There is management, coordination and funding. No one should pretend that there is no funding. ...

So, go tell the people clearly that we have a funder X from country X or from embassy X or this rich person X or this institution X to see whether these people and embassies of countries who are spending money care for the interests of the Lebanese people.
...
I want to warn. This happened in other countries. God willing, this is not being planned for in Lebanon. At the very least, I would like to tell the people to be aware that it might be a possibility. I think it's more than a possibility. I think now it's a lot more than a possibility. Don't believe what the embassies say. Today the American ambassador and the embassies say no, we don't want the overthrow of the government or for it to resign. What they say is not important. What they do is what is important. It is not important what they promise. What is important is what the CIA and the intelligence agencies are doing.

Nasrallah should rethink how the protests really started out.

As for the CIA - we do not know what it did in those protests. But we do know that the CIA had outsourced the propaganda groundwork in Syria to the Brits and their shady 'Strategic Communication' companies.

It is quite possible that it has done the same in Lebanon.

---
To keep Moon of Alabama up and running day by day takes a significant effort. Please help me to sustain it. - b