When watching this Jimmy Dore Show about the Capitol incident one can clearly see that some of the police were reluctant to intervene against the surprise visitors. Some even took selfies with them. The police may have been overwhelmed and decided that more fighting would have been counterproductive. Or, maybe, they let it happen on purpose?

The LIHOP theory is often applied to the 9/11 incident in 2001. The FBI and others knew that terrorist from the Middle East were about to use air planes to attack within the U.S. but it was decided to let that happen and to use the event for political gain. That political gain came in form of the Patriot Act which gave the government more power to spy on its citizens, and in form of the war of terror on the Middle East.

Even weeks before Wednesday's event there had been lots of open source chatter about a big protest in Washington and plans to take on the Capitol. Like in in 455, when the Vandals sacked Rome, there was little done by the local authorities to prevent that. The actors in both incidents have by the way remarkable similarities. 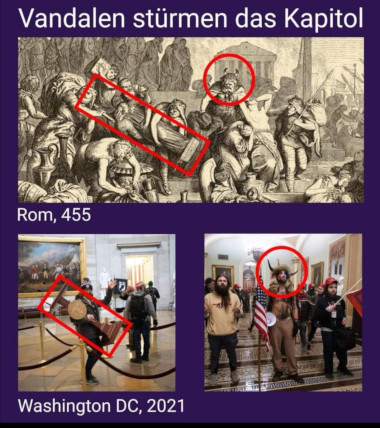 If we consider that 'Vandals' storming the Capitol was known to be upcoming and that the vandals actually managed to do it, we have to look for potential aims of those who might have allowed it to happen.

Two are sticking out. The 'Domestic terrorism' issues and the mass destruction of communication channels used by Trump and the political right.

Joe Biden gave a hint when he (falsely) called the Capitol incident an act of 'domestic terrorism':

President-elect Joe Biden characterized the mob that stormed the U.S. Capitol on Wednesday as domestic terrorists, referring to the violence as “one of the darkest days in the history of our nation.”
...
Mr. Biden has said he plans to make a priority of passing a law against domestic terrorism, and he has been urged to create a White House post overseeing the fight against ideologically inspired violent extremists and increasing funding to combat them.

Federal law defines domestic terrorism as dangerous and illegal acts intended to coerce a population or influence the government. While it can be charged in some states, no generic federal crime exists. Domestic terrorism spans extremist ideologies, but it has been predominantly a far-right phenomenon in recent decades, according to researchers.

In 2019 Adam Schiff, the unhinged Russia basher who has falsely claimed that he had evidence of a Trump collusion with Russia, introduced a 'domestic terrorism' bill that will now likely be taken up.

The Hill reported at that time:

The actual bill Schiff introduce is quite generic and covers a wide range of actions as well as attempts to take such actions or conspiring to do them:

Whoever, in a circumstance described in subsection (b), and with the intent to intimidate or coerce a civilian population, influence the policy of a government by intimidation or coercion, or affect the conduct of a government by mass destruction, assassination, or kidnapping—

(A) knowingly kills, kidnaps, maims, commits an assault resulting in serious bodily injury, or assaults with a dangerous weapon any person within the United States; or

in violation of the laws of any State, or the United States, shall be punished under section 2332b(c).

Any prosecutor will be able to use the wording of the law to indict someone who has been talking about bashing a road sign for 'domestic terrorism'.

Such a law will of course not only be used against the 'white supremacists' who Schiff claims to dislike but, as ACLU pointed out, primarily against the left and minorities:

People of color and other marginalized communities have long been targeted under domestic terrorism authorities for unfair and discriminatory surveillance, investigations, and prosecutions. Law enforcement agencies’ use of these authorities undermines and has violated equal protection, due process, and First Amendment rights. Law enforcement agencies already have all the authorities they need to address white supremacist violence effectively. We therefore urge you instead to require agencies to provide meaningful public data on their use of resources and failure to prioritize white supremacist violence.

The ACLU strongly urges you to oppose H.R. 4192, Confronting the Threat of Domestic Terrorism Act because it is unnecessary and would serve to target the very communities that Congress is seeking to protect.

The Capitol attack does not justify such new laws or more spying.

As a second consequence of the Capitol incident the tech monopoly companies, which are largely aligned with the corporate Democrats, took coordinated action to disrupt the communication between Trump and his political followers as well as within the general political right.

The company Trump used for mass emailing to his followers has stopped its service for Trump. Twitter, Facebook, Instagram, SnapChat and Shopify have all banned Trump. Apple and Google took steps against the Parlor app which is mostly used by people on the right. It wasn't only Trump who was banned:

Thousands of Twitter accounts, mostly not prominent ones, were culled over night.

The banning of Trump has nothing to do with the actual content of Trump's or others' communications:

Byron York @ByronYork - 23:53 UTC · Jan 8, 2021
Twitter has permanently banned President Trump, and they did it on the basis of two unobjectionable tweets. Example: Twitter says Trump's 'I won't go to inauguration' tweet will 'inspire' violence. https://blog.twitter.com/en_us/topics/c...

The was an organized and likely long planned campaign initiated by the incoming Biden administration. Trump's tweets and followers were probably the biggest traffic generators Twitter and Facebook ever had. They would not have killed off that profitable source of revenues if the incoming administration had not threatened them with new regulations.

Michael Tracey condemned this campaign in a series of tweets:

Twitter's stated rationale for banning Sidney Powell, Mike Flynn, and others -- "behavior that has the potential to lead to offline harm" -- is extraordinarily creepy and could be used against virtually anyone if the powers-that-be decided it was politically necessary

None of this is about “safety,” it’s about purposely inflating a threat in order to assert political and cultural dominance

If we’re accepting this new “incitement” doctrine there are thousands of activists who could be purged/criminalized for “inciting” an enormous wave of violent riots over the summer. But thankfully there’s a thing called “protected speech,” although it’s quickly being shredded

The most extreme, coordinated corporate censorship offensive in modern history and liberals/leftists are in a mindless celebratory stupor. Pathetic shills

Corporate liberals and leftists have been absolutely obsessed with purging the internet of political undesirables since 2016, and this "crisis" is the perfect opportunity to finally fulfill their deepest authoritarian wish

The new corporate authoritarian liberal-left monoculture is going to be absolutely ruthless -- and in 12 days it is merging with the state. This only the beginning

Must just be a total coincidence that YouTube also happened to terminate Steve Bannon. Definitely not a coordinated political revenge campaign by the tech oligarchs as they wait for a Democratic administration to come in

Make no mistake. Both actions that follow from the ludicrous Capitol 'sacking', Biden's 'domestic terrorism' act and the systematic eradication of communication channels for people with certain opinions, will primarily be used against the left.

When President Biden starts his first war all significant protest against it will be declared to be 'domestic terrorism'. All communication against it will be 'inciting' and therefore banned. We know this because it has always been like this