On August 4 2020 2.750 tons of ammonium nitrate, stored in a warehouse of Beirut's harbour, exploded. The blast destroyed large parts of the city.

The dangerous load had come on a defect ship which was impounded by the Lebanese authorities. It had been stored since 2013. Despite urgent warnings, the complicate Lebanese bureaucracy had never found a way to get rid of the dangerous load.

Soon conspiracy theories sprang up about the 'real' ownership and purpose of the load and of who might have had an interest in igniting it. None made much sense. The original explanation of a bureaucratic tussle and pure neglect are still the most plausible cause.

But that does not stop the British Guardian from trying to blame the Syrian government for the incident: 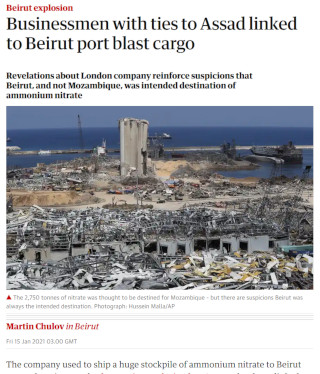 Here is how the Guardian 'links' the Syrian government with the explosion:

The company used to ship a huge stockpile of ammonium nitrate to Beirut port, where it caused a devastating explosion last August, has been linked to three influential businessmen with ties to Syrian president Bashar al-Assad, a new investigation has found.
...
An investigation by the Lebanese film-maker Firas Hatoum, which aired this week on local television network Al-Jadeed, drew links between Savaro and three figures who had been central to efforts to bolster Assad since the earliest months of the Syrian war.

George Haswani, Mudalal Khuri and his brother Imad are joint Russian-Syrian citizens who have all been sanctioned by the United States for supporting the Syrian leader’s war effort. Companies linked to Haswani and Imad Khuri shared a London address with Savaro, which bought the nitrate in 2013. The official destination of the cargo was Mozambique, but it was diverted to and unloaded in Beirut, where it was stored unsafely until the catastrophic blast.
...
The Savaro address – 10 Great Russell Street, London WC1B 3BQ – was also the registered address of Hesco Engineering and Construction, which was directed by Haswani, a go-to businessman for Assad who was also sanctioned by the US in 2015 for allegedly buying oil from the Islamic State (Isis) terror group on behalf of the Syrian government.

According to documents supplied by Hatoum, another of Savaro’s London addresses is linked to a second company tied to Haswani’s Hesco now defunct company, IK Petroleum, which was directed by Imad Khruri until 2016.

The suspicious 'link' the Guardian describes is solely based on the common address of otherwise unconnected companies.

But all the named companies are just letterbox entities. These get set up and dissolved by the dozens per day. The British government's registrar for such businesses is Companies House. It allows anyone to search for a company's name, address and ownership.

A Companies House search for 10 Great Russell Street, London WC1B 3BQ, the common address of the suspicious companies, currently results in 140,871 matches. And yes, they all have the same address. 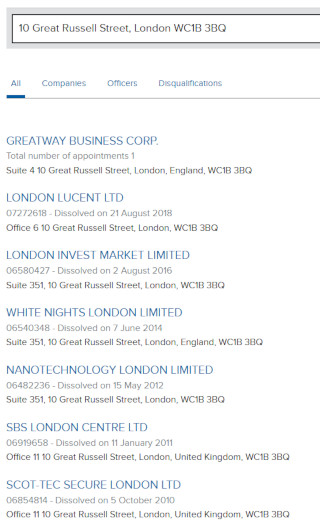 More that 140,000 active or dissolved companies have been registered at 10 Great Russell Street, London WC1B 3BQ. To then claim that some of these companies are suspiciously 'linked' to each other because they share the same nominal letterbox is bonkers. It is like claiming that U.S. companies are 'linked' because they are, for tax reasons, registered in Delaware.

Why Martin Chulov, the Guardian's Middle East correspondent and author of the piece, did not do the basic diligence of checking the records or chose not to tell his readers that such address sharing is extremely common and does not prove anything is beyond me.

One might suspect that any chance to denounce the Syrian government over whatever nonsense has taken priority over journalistic diligence.

In 2015 Chulov won the Orwell price for journalism.

Orwellian that indeed is.