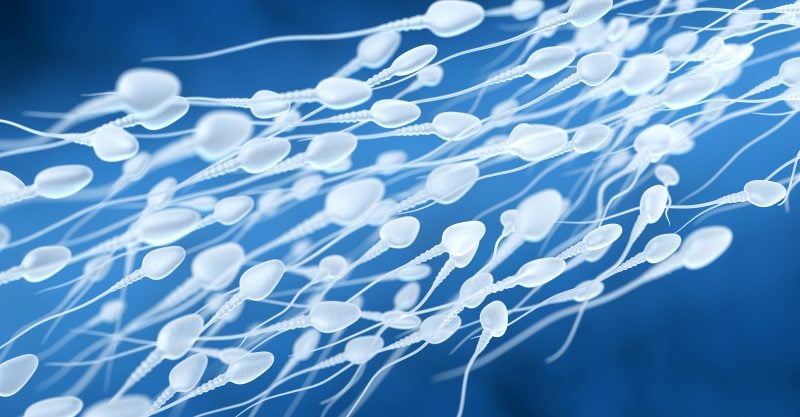 Scientists are witnessing an alarming trend: Men’s sperm counts are down, testosterone levels have plunged and erectile dysfunction is increasing. Male infertility is on the rise — and exposure to synthetic chemicals known as phthalates could be to blame, according to fertility scientist Shanna Swan, Ph.D., author of the new book, “Count Down: How Our Modern World Is Threatening Sperm Counts, Altering Male and Female Reproductive Development and Imperiling the Future of the Human Race.”

Citing Swan’s book, the New York Post reported that the global fertility rate has dropped 50% between 1960 and 2016, with the U.S. birth rate 16% below where it needs to be to sustain the population.

Although girls are experiencing early puberty, and women are experiencing declining egg quality and more miscarriages, emerging science is shifting the focus toward men as more couples suffer from infertility.

Scientists report sperm counts have been dropping, infant boys are developing more genital abnormalities and men’s problems with conception are on the rise. Erectile dysfunction is increasing and testosterone levels are decreasing 1% each year.

In 2017, Swan, one of the world’s leading environmental and reproductive epidemiologists, co-authored a meta-analysis that came to a staggering conclusion: The sperm count of average Western countries had fallen by 59% between 1973 and 2011.

“If you look at the curve on sperm count and project it forward — which is always risky — it reaches zero in 2045, meaning the median man would have essentially no viable sperm,” Swan writes in her book.

As a result, more men are getting prescriptions for testosterone replacement therapy, which increases testosterone levels but causes an even greater reduction in sperm count. “Ninety percent of men can have their sperm counts drop to zero while they’re on it,” according to Swan.

Sexual desire among men is also declining. Swan, who has studied infertility for more than 30 years, says men are seeking help for erectile dysfunction on average seven years earlier than they did in 2005, with 26% of men falling under the age of 40.

According to the New York Post, research shows an overall increase in genital abnormalities, including a higher rate of undescended testicles and unusually small penises. Growing numbers of sperm appear defective with some having two heads or wandering aimlessly instead of pursuing an egg.

Similar abnormalities have been observed in animals. Small penises are being reported in alligators, otters and minks. Polar bears have lower-than-normal testosterone levels, panthers are showing an increase in genital abnormalities, and fish, frogs and turtles are being born with both male and female organs.

Research points to endocrine-disrupting phthalates as likely cause

Swan and her colleagues say the problem could be caused by a class of endocrine disruptors known as phthalates, which mimic the body’s hormones.

In several studies over the last two decades, phthalates have been shown to disrupt male hormones like testosterone and to cause genital birth defects in male infants.

Flame retardants found in mattresses and foam furniture were linked to male infertility in a 2016 study published in the Reproductive Toxicology Journal, and chemicals in stain, water, fast-food packaging, paper plates, stain-resistant carpeting and other household items have been linked to a reduction in semen quality, testicular volume and penis length.

A 2017 U.S. study showed that 45 potentially harmful chemicals, including phthalates and flame retardants, were present in dust buildup in 90% of homes sampled, reported the New York Post.

Pesticides and herbicides have also been found to negatively affect male infertility. Atrazine, an herbicide used to prevent certain weeds from growing in corn, has been linked to lower sperm quality.

In her latest book, Swan writes:

“The problem isn’t that something is inherently wrong with the human body as it has evolved over time; it’s that chemicals in our environment and unhealthy lifestyle practices in our modern world are disrupting our hormonal balance, causing varying degrees of reproductive havoc that can foil fertility and lead to long-term health problems even after one has left the reproductive years.”

The cumulative effect of endocrine disruptors affect multiple generations. Patrician Hunt, a reproductive geneticist at Washington State University, conducted experiments on mice. When infant mice were exposed to disruptive chemicals for a few days their testes as adults produced fewer sperm. The mice passed on this propensity to their offspring, and after three generations of exposure, one-fifth of male mice were infertile.

“I find this particularly troubling,” Professor Hunt told The New York Times. “From the standpoint of human exposures, you could argue we are hitting the third generation just about now.”

“We can no longer afford to behave as though it’s business as usual,” Swan writes in her book. “The time has come for us to stop playing Russian roulette with our reproductive capacities.”