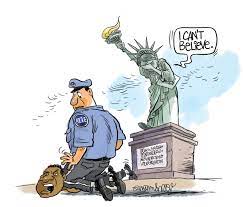 Much has been written about police departments using taxpayer dollars to create their own Public Relations (PR) departments. But this latest twist might leave you screaming for justice for George Floyd's killers.

As Dan Grossi from the Police1 website admits, a police department's public information officer (PIO) sometimes isn't enough to convince the public to believe their version of events.

"With police-public relations more complicated than ever, a highly trained PR department can help manage an agency’s image."

"Law enforcement agencies should be deploying public relations strategies to establish a positive relationship with the community before an incident occurs."

As Discover Policing reveals, police departments enlist an entire network of "Community Policing" to push their version of events.

From PIO's to PR departments, law enforcement has a near endless list of tools at its disposal.

An article in the Minnesota Reformer reveals, that the Minneapolis City Council is hiring social media influencers to change the public's opinion about George Floyd's killing.

"The area around the downtown Minneapolis courthouse where Derek Chauvin will soon go on trial for the murder of George Floyd is gradually taking on the look of military occupation."

It appears that the Minneapolis Police Department police is not happy with using the traditional ways of influencing the public.

"Before Scott Fletcher was elected to the City Council, he was out in the streets organizing protests, training protesters, serving as protest marshal — all of it. Now that he’s part of the government, he’s trying to use his protest experience to help residents through the trial."

Does anyone else find it a bit suspicious that a protest marshal who was "organizing protests and training protesters" has convinced the city to hire social media influencers?

"The city plans to share information on the ground and online and get input from the public through community members who meet regularly; create safety toolkits for residents and community groups’ and form a “community information network,” including partnerships with media."

Minneapolis has set aside nearly $1.2 million in taxpayer dollars to create the "Community Organizations For Public Safety And Engagement Services" to help spread the police departments'  version of events.

"Leverage existing City roles: Utilize the network of staff who have roles relevant to the work around 38th and Chicago, community safety and engagement to share information out and share back community concerns. "

Only "trusted paid social media influencers" will be allowed to post City generated and approved messages.

"Social media influencers: Paid partnerships with community members who are considered trusted messengers and have large social media presence to share City generated and approved messages. These partners also support our JIS situation monitoring so we can address/dispel incorrect information."

The city of Minneapolis is going out of its way to influence the community and black-led media.

According to the Minnesota Reformer, the city of Minneapolis is blanketing social media with their own version of events,

"The city has also expanded its cultural radio programs — on KMOJ, WIXK, KALY and La Raza, which reach the African American/Black, Hmong, Somali and Latino/a/x communities — by going from bimonthly or monthly programs to weekly programs."

It is hard for anyone but the most fervent pro-police supporters not to see how closely Minneapolis's community policing parallels that of the "Voice of America".

"The Voice of America is an American international broadcaster funded by the United States Congress. It is the largest and oldest U.S. funded international broadcaster. VOA produces digital, TV, and radio content in 47 languages which it distributes to affiliate stations around the globe. It is primarily viewed by foreign audiences, so VOA programming has an influence on public opinion abroad regarding the United States and its people."

Is community policing paid for by the DOJ and taxpayer dollars? Yes.

Does anyone else find it ironic that some of the most outspoken agencies of fake news over the past few years have been law enforcement?

How can police departments who employ a network of PIO officers, PR departments and social media influencers claim that stories about police violence are fake news?