"Those who decide to enroll in Health Pass will be prompted to authenticate through the app by uploading a selfie and pictures of official ID, which will then be compared using facial recognition. From there, each user is prompted to fill out a short questionnaire on symptoms related to the novel coronavirus. This will essentially create a biometric and health status profile."

CLEAR's confetti cannons announced the entry of each family 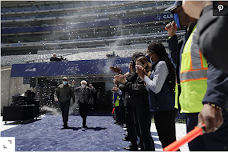 "The two-and-a-half-hour event, CLEAR Connects: A Day of Families was hosted by the actor Neil Patrick Harris and treated about two dozen families to lunch, live music, photo booths and games."

CLEAR's hired gun, actor Neil Patrick Harris, welcomed 100 family members to MetLife Stadium; which has been using CLEAR since 2018, its proximity to two airports notwithstanding.
The thinly disguised "A Day Of Families" is really a facial recognition sponsored festival, complete with food, a Broadway musical, games and CLEAR photo booths. Because what self-respecting facial recognition company wouldn't spring at the chance to use photo booths to ID every family member?
There is perhaps no better example of MSM fawning over facial recognition and COVID quite like the Daily Mail who posted 12 pictures of families being reunited at MetLife stadium.
As Psychology Today noted, people love free stuff.

"Human decision-makers are notoriously bad at withstanding the lure of giveaways. Indeed, the chance of receiving a freebie may appear like a rare reward in a world where people frequently have to pay for visiting public toilets."

If more people viewed facial recognition companies as profit-driven, ID hungry corporations, then maybe we would never ever witness another facial recognition sponsored festival where a woman jumps for joy at the prospect of seeing her family.

credit: Daily Mail
The success of CLEAR's "A Day Of Families" means Americans will see biometric companies use more audacious marketing strategies trying to convince a gullible public that they care about families and privacy.