Trained by Years of Guerilla War, Yemen’s Houthis Want to Export Thier Revolution to Palestine

Ansar Allah, who has enjoyed staggering success in staving off the wholesale invasion of their country by the U.S.-backed Saudi military, is eager to export its resistance mentality and battlefield knowledge to Palestine.

HODEIDA, YEMEN — Ayesh Atta arranges rings of long, light yellow Jasmine flowers into necklaces to give to the protesters and passers-by of his Mina Street flower shop in the coastal city of Hodeida. In the past, the 34-year-old Ayesh preserved the flowers in an icebox to sell in distant markets for Eid al-Fitr at a substantial profit. Now, despite desperately needing money, he’s decided to distribute the Jasmine necklaces for free to people who have taken to the streets in front of his shop in solidarity with the people of Palestine.

The Jasmine necklaces were one of the dozens of items adorning massive demonstrations in the streets of most major Yemeni cities in solidarity with the Occupied Palestinian Territories. Waving Palestinian and Yemeni flags, banners, and photos of resistance leaders, and hoisting Kalashnikovs in the air, demonstrators didn’t seem deterred by the armed drones and military aircraft of the Saudi-led Coalition that hovered over the massive crowds.

The recent Israeli aggression against Palestinians in Jerusalem, the occupied West Bank, and Gaza came at the end of the Muslim holy month of Ramadan and in the wake of Israel’s forced expulsion of dozens of Palestinians from their homes in the Jerusalem neighborhood of Sheikh Jarrah. The timing of the move has agitated the Yemeni public, who share a strong sense of solidarity and kinship with the Palestinians on religious grounds and through a shared sense of brotherhood borne of having to endure violence and oppression with little support from the international community.

In Yemen’s capital city of Sana’a, hundreds of thousands of residents from the suburbs and neighboring towns gathered at Bab al-Yemen, the city’s main square, carrying Palestinian flags and holding banners encouraging Hamas to continue its campaign of pressure against Israel. In Hodeida, hundreds of thousands of protesters took to the streets despite the ever-present threat of incoming artillery shells, snipers’ bullets, and Saudi warplanes hovering above.

The demonstrations, organized by the Ansar Allah (Houthis), also took place in Sana’a Province in northern Yemen, where hundreds of thousands rallied. Ibb, al-Jawf, Reimah, Dhamar, Amran, the northwest province of Hajjah, the central province of al–Mahweet, and Taiz overlooking the strait of Bab al-Mandab (which was closed in the 1973 war between Egypt and Israel by Yemeni forces supportive to Egyptian forces) also saw large mobilizations of protesters.

The protests drew crowds from across Yemen’s social and political divides. Military field commanders in the Yemeni missile force joined with the Left Party members alongside dozens of Palestinians, including representatives from Hamas. A Yemeni boy protests through a Palestinian flag during a protest against Israeli attacks on Gaza, in Sanaa, May 17, 2021. Hani Mohammed | AP 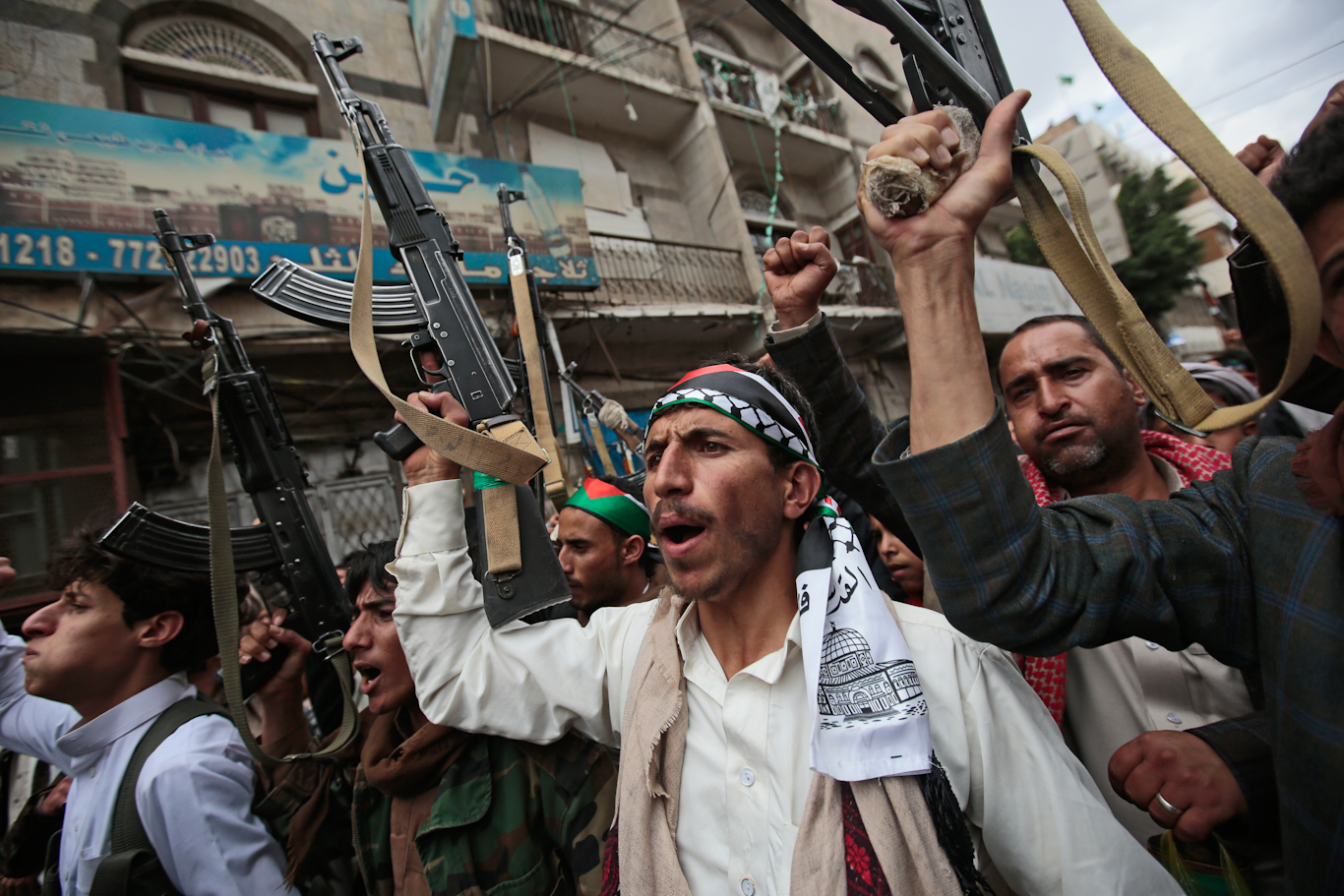 Many Yemenis see the Palestinian protests, as well as the barrages of Hamas rockets into Israel, as heroic retaliation on a par with their own resistance against the heavily armed Saudi-led Coalition. “We shouldn’t let Palestinians drink from the same cup [as we do]. So any Yemeni military intervention against Israel will make me happy and give me hope of an eventual victory,” Ayesh said in the wake of Ansar Allah’s announcement that Yemen is ready to provide military support to the Palestinian resistance.

We [Houthis] are making necessary preparations according to developments, meaning that a military intervention depends on current developments in all of Palestine… Today in Palestine we [stand ready] to fight alongside you side by side and shoulder to shoulder with everything we have.”

Admitting that Ansar Allah is closely coordinating with the Palestinian resistance, he also announced a fundraising campaign to gather donations for Palestinian people. The campaign has reportedly already been quite successful in gathering voluntary donations despite the dire humanitarian situation and economic crisis that plagues the country.

The move is not without precedent: three years ago, al-Houthi told Hezbollah leader Hassan Nasrallah that 10,000 Yemeni fighters would unite with Hezbollah against Israel if it launched a war in Lebanon or Palestine. Thousands of Yemeni fighters have reportedly already been trained to fight on the border of the occupied Palestinian territories. In March 2020, al-Houthi announced an initiative to release five Saudi prisoners of war, including a fighter pilot, if Saudi Arabia agreed to free a number of Hamas members detained since April 2019. Hamas welcomed the initiative, saying, “We highly appreciate the sympathy and brotherly spirit with Palestinians and the support for their resilience and resistance.”

Hoping to turn the tide

Ansar Allah, which has enjoyed extraordinary grassroots success in staving off the wholesale invasion of their country by the U.S.-backed Saudi military, is eager to export their resistance mentality and battlefield knowledge to Palestine. They see the Palestinian struggle as part of a broader campaign to violate the sanctity of Muslims around the world and hope to turn the tide by supporting the Palestinian resistance to Israel through transfer of battlefield know-how, specifically the use of ballistic missiles and armed drones, to fight a highly-advanced enemy equipped with the latest Western weapons. Ansar Allah was able to leverage these neo-guerrilla tactics to inflict a painful toll on the Saudi-led Coalition and, many experts believe, force them to the negotiating table. Protestors place a necklace of jasmine on a soldier during a protest demanding the resignation of Ali Abdullah Saleh in 2011. Hani Mhammed | AP

The Yemeni army, loyal to Ansar Allah, has reportedly now developed its arsenal of ballistic missiles and drones to a point where they are capable of hitting targets inside of Israel. At a military exhibition last March, Ansar Allah inaugurated new winged missile systems with a range of 2,000 kilometers, putting Israel well within striking distance. Of the missile systems unveiled at the exhibition was the Quds 2, named after the Arabic word for the city of Jerusalem.

Ansar Allah’s threats should not be taken lightly; the group is known to strike sensitive targets without hesitation. Some of the newly unveiled missile systems were used to successfully strike Saudi Arabia’s state-owned Aramco oil facilities in Ras Tanura, an oil terminal in the far northeast of the Kingdom, far from Ansar Allah’s seat of power in western Yemen.

Other home-brewed Ansar Allah missile systems, such as the  Borkan 3, have been successful in accurately striking targets deep inside Saudi and United Arab Emirates territory, putting Israel well within reach of multiple types of Ansar Allah missiles. The Borkan is a modified Scud and was used for a strike on the King Khalid International Airport near Riyadh, more than 800 km from Yemen’s northern border. The missile was able to evade U.S. Patriot missile air-defense systems.

Now is the time

Signs of an imminent Israeli attack on Yemen seem closer than ever, according to statements by Israeli officials as reported by MintPress in January. Many Yemeni military experts who spoke with MintPress say that there is an increasing feeling within Ansar Allah that they should not wait for Israel to surprise them and that, if preemptive measures must be taken, now is the time to strike — both because of Israel’s ongoing violence against Palestinians and because the move could provide Ansar Allah much-needed support from the Arab world for its resistance against Israeli aggression, especially in light of the spate of highly unpopular normalization efforts between Israel and Arab governments.

The Ayesh family once ran a commercial horticulture operation cultivating jasmine in western Hodeida before it was partially destroyed by a Saudi double airstrike. He says the aggression against Palestinians should remind the world of the aggression that Yemenis have faced for years with support for the Saudis from the United States and Israel. On Friday, a number of civilians were killed in a Saudi airstrike on civilians preparing to protest Israel’s violence in Gaza.

To Ayesh and many Yemenis, it makes no difference if it happens in Gaza or in northern Yemen — both are subjected to constant bombing of populated areas with Western weapons and with little international media coverage.

Feature photo | Ansar Allah supporters hold weapons as they chant slogans during a protest against Israeli attacks on Palestinians in Gaza, in Sanaa, Yemen, May 17, 2021. Hani Mohammed | AP

Ahmed AbdulKareem is a Yemeni journalist based in Sana’a. He covers the war in Yemen for MintPress News as well as local Yemeni media.