Boy Scouts Pay Out Nearly A Billion For 60,000 Sex Abuse Victims And Almost No Arrests Were Made

Just because it is considered a boys club does not mean the Boy Scouts of America (BSA) is unprofitable. In fact, their assets topped over a billion dollars. Some might conclude it is long overdue but on Thursday of last week, the billionaire boys club announced it has finally agreed to pay for all the decades of child sexual abuse its members have inflicted on unsuspecting young boys, usually at the hands of the club’s leaders. In an historic settlement with victims, the Boy Scouts of America will be paying out $850 million dollars to the abused. 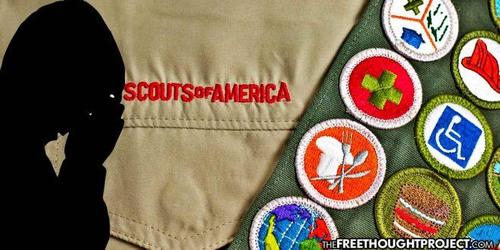 While that figure will substantially diminish the club’s net worth, unfortunately, because the victims are so numerous, the $850 million will amount to between three and five thousand dollars per victim, the equivalent to a month and a half’s earnings at minimum wage, a proverbial drop in the bucket. Undoubtedly, the settlement will feel like a slap in the face to those children, many of whom are now adults, who have lost their innocence to predators and the organization which allegedly protected such pedophiles.

According to NPR, it is the first time the organization has ever paid out any settlement for any lawsuit to which it has been named a party, and there are several.

The agreement, announced on Thursday, is the first legal settlement in a long list of lawsuits against the Boy Scouts, which filed for Chapter 11 bankruptcy in February 2020.

Ken Rothweiler, one of the chief negotiators in the settlement called it, “the largest settlement of sexual abuse claims in United States history.”

The organization is relying on its local councils to pay at least $300 million, and the parent organization will also pay for things like “non-monetary commitments to abuse victims, including youth protection measures, a reporting system, formation of a Child Protection Committee, and information sharing related to abuse claims,” according to NPR.

Rothweiler’s law firm represents over 16,000 abuse victims dating back to the 1940’s, whose predators were catalogued in an internal list called the “perversion files”. Rothweiler, along with Tim Kosnoff, partnered to form the group known as Abused in Scouting to bring awareness to the thousands upon thousands of victims encouraging them to come forward. Kosnoff is now livid at the agreed upon settlement, according to NPR which quoted Kosnoff as saying:

I don’t know how you can characterize this as anything but a failure…I would say it is a nonstarter, and if my clients asked me if I thought it was a good deal for them I would say no…You’re talking about clients who, in some cases, were anally raped for years that are now supposed to get payouts of $3,500 … maybe $5,000…That is an insult to all of the men who found the courage to file claims and participated in this process.

For its part the BSA believes the payouts are fair. In a statement they proclaim:

This agreement ensures that we have the overwhelming support of survivors for the BSA’s proposed Plan of Reorganization, which is a key step in the BSA’s path toward emerging from bankruptcy. Bringing these groups together marks a significant milestone and is the biggest step forward to date as the BSA works toward our dual imperatives of equitably compensating survivors of abuse and preserving the mission of Scouting.

It is unclear if the presiding judge will accept the offer made by the BSA. Hopefully they will be able to see how very little money victims are getting in exchange for having their sexual innocence ripped away and do the right thing. The burden of the payout should not have to come from the participants in the local councils but from the organization itself in our humble opinion, and the payouts need to be ten to twenty times higher at least.

On top of the insultingly low payout, another kick in the teeth to the thousands of victims is the fact that there have been almost no arrests. This detail seems to be something the mainstream outlets are refusing to acknowledge. Over the decades of abuse, the Boy Scouts, like the Catholic Church, enjoyed a sort of immunity from prosecution, and only a handful of troop leaders have been arrested for their crimes. A travesty indeed.