L-BAYDA, YEMEN — President Joe Biden gave a lot of people a sense of cautious optimism when he took to the campaign trail and promised to bring a swift end to the Saudi-led war on Yemen. The oil-rich monarchy, supported heavily by the United States, has been waging arguably the deadliest military campaign of the past decade on the forgotten country for over six years, exacting a brutal humanitarian toll on its civilian population.

To his credit, Biden sent Tim Lenderking to lead a team of negotiators in an attempt to broker reconciliation between the conflict’s many belligerents. But without the political will to stand up to the Saudi monarchy and the varied American interests that profit handsomely from its wars, Lenderking had little chance of success. Now it seems the Kingdom — once again emboldened, armed, and covered by the United States — has all but abandoned any pretense of reconciliation and doubled down on its brutal war.

A Piercing Star falls to earth

Last week, the Saudi-led Coalition began a massive military operation they’re calling al-Najm al-Thaqib, which translates from Arabic into The Piercing Star. The operation ostensibly aims to recapture large swaths of territory in central Yemen’s al-Bayda province, which was captured by Ansar Allah after a series of long and grueling battles with militants from al-Qaeda on the Arabia Peninsula (AQAP) last fall. AQAP had been entrenched in the province for decades, somehow persevering through concerted military efforts by both the Saudi-led Coalition and at least four consecutive U.S. administrations to dislodge it — including Barack Obama’s infamous drone war

On August 28, 2020, local tribal partisans backed by Ansar Allah defeated AQAP and myriad extremist allies, including elements of IS, in a week-long operation. This victory came just as AQAP was preparing to sweep the Yemeni provinces of al-Bayda, Dhamar, and Sana’a in an operation that aimed to repeat the scenarios seen in Mosul, Iraq and Raqqa, Syria, where ISIS was able to take and hold a so-called caliphate extending from western Iraq to into eastern Syria.

Al-Bayda and the surrounding provinces saw a state of relative calm in the wake of the operation, as residents experienced life without the yoke of al-Qaeda, some for the first time in their lives. Now, some of those residents fear that Saudi Arabia, backed by the United States, is attempting to resettle those groups in al-Bayda as a hedge against Ansar Allah.

Saudi jets have carried out scores of airstrikes in al-Bayda in recent weeks, flying in from the north to unleash tons of bombs made and supplied by the United States and giving AQAP a potential avenue to retake the province, as the airstrikes have targeted Ansar Allah and their local tribal allies almost exclusively.

According to the nonprofit Yemeni Executive Mine Action Center (YEMAC), American-made cluster bombs — which even the U.S. military has pledged not to use, due to their high rate of collateral damage — including the CBU-58, CBU-105, CBU-87, M26, and DPICM M77, have all been used in the offensive.

In a press conference, YEMAC displayed unexploded American bombs used in the operation, including the same GBU-39 and GBU-31 that were used with deadly effect in Israel’s recent attacks on Gaza. YEMAC held the press conference after an unexploded U.S.-made GBU-24 was recovered from a civil-defense building in Sana’a.

While there is not yet conclusive evidence of direct coordination between the Saudi Coalition and AQAP in the offensive, AQAP militants began pushing into al-Bayda from the south almost as soon as the Saudi airstrikes began. The southern villages of al-Zaher and al-Sma’h — including the areas of Jumaima, Wafaa, Sharadeh, al-Sous, Shabakat Dhi Madahi, Akrama, Shawkan and others — have already been recaptured by al-Qaeda according to a number of Saudi state-funded media outlets, which celebrated the putsch as a victory for the Saudi-led Coalition.

However, the celebrations were short-lived, as Ansar Allah has already begun to recapture areas it gained last August in a military operation it has dubbed al-Nasr al-Mubin, an Arabic phrase meaning “Certain Victory.” That operation has already seen the defeat of AQAP and militants allied with Saudi Arabia in the al-Zahir Directorate as well as dozens of military sites in the al-Dahaki and Al-Soma`h districts, and even areas that Ansar Allah failed to capture from AQAP during its August offensive, according to a statement it issued on Tuesday. On Friday, the media bureau of the Houthis’ Operations Command Center published a video showing some of its victories in al-Bayda. Several senior AQAP commanders were killed or captured in the battles, including the infamous Abu Dharr al-Tayabi, Tawfiq al-Farawi and Othman Ahmad Abdullah al-Mushdali. A spokesman for Ansar Allah said:

Despite having mobilized members of al-Qaeda in the Arabian Peninsula (AQAP) and Daesh (IS) Takfiri terrorist groups, Saudi [Arabia] failed and has so far reaped nothing other than defeat on every front. The coalition has received severe blows in al-Bayda, even though it has hired al-Qaeda and Daesh terrorists.”

But Ansar Allah is far from a decisive victory. Fierce clashes continue near Lahj province and coalition warplanes continue to pound al-Bayda.

US cooperation with a Jihadi recruiter

According to members of the Houthi negotiating delegation, who spoke to MintPress on condition of anonymity, the escalation in al-Bayda is being used to pressure Ansar Allah to halt its advance on the oil-rich Marib province and to force it to accept conditions that Saudi Arabia and Lenderking’s envoy have imposed on Ansar Allah as a precondition for a peace deal.

For their part, the Houthis have promised to retaliate by resuming drone and ballistic missile attacks on Saudi oil and military targets in the Kingdom’s southern provinces, according to Brigadier General Abed Al-Thor and General Aziz Rashid, who told MintPress that military pressure on the Kingdom will only be increased in the wake of the recent Saudi escalation.

The attacks on al-Bayda come in the wake of meetings between the Saudi-backed vice president of Yemen, Ali Mohsen al-Ahmar, and Vice Admiral Brad Cooper, commander of the U.S. Naval Forces Central Command and the U.S. 5th Fleet and Combined Maritime Forces. Cooper pushed for intelligence sharing and support for armed militant groups under the banner of curbing the arming of the Houthis by the Iranian government. 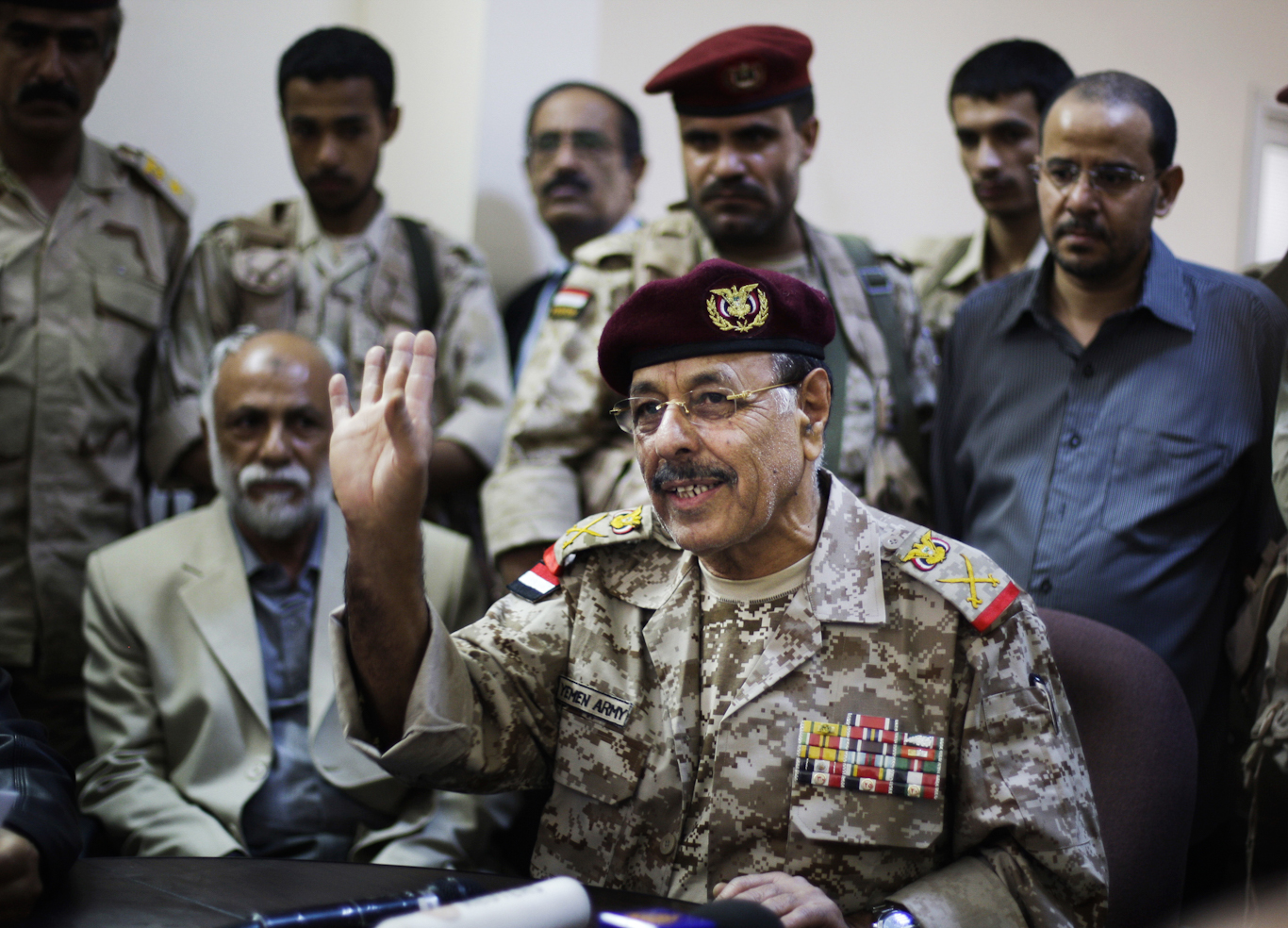 Al-Ahmar has been tied to various extremist groups in Yemen and, according to Reuters, “The Muslim Brotherhood and other Sunni Islamists gained strength, particularly under … al-Ahmar, who built a power base in the army. Jihadist fugitives formed al Qaeda in the Arabian Peninsula (AQAP).” According to a 2000 New York Times report, al-Ahmar even “traveled to Afghanistan in the 1980s to meet Osama bin Laden, and assisted in recruiting militants from across the Muslim world for the Afghan struggle.”

The U.S. has long been involved in the training and arming of militants in Yemen, whom it saw as a hedge against Ansar Allah. Al-Ahmar has publicly praised the U.S. for cooperating with him to combat what he called “the Iranian project.”

On July 1, U.S. State Department spokesman Ned Price said that the United States was “beyond fed up” with the Houthis’ advance in Marib and laid the blame for the humanitarian situation in Yemen squarely at the feet of the Houthis, claiming it was they who failed to work with the “other parties … who are actively working towards peace,” a reference to Saudi Arabia and its allies in the country.

Price’s statements and the Biden administration’s about-face on Yemen has raised questions among activists struggling to stop the war, especially as the U.S. has largely refused calls to stop arming Saudi Arabia amid a devastating civilian death toll, and now seems to be doubling down on its commitment to a military solution to the conflict, falling back on its habit of supporting armed militant groups that it used to devastating effect in Syria, Libya, Afghanistan and Iraq.

“The Biden administration should have stopped providing weapons and training to the warring parties to ensure that the war would not continue, and not support one at the expense of the other, so logic and reality say,” Dala al-Matari, an activist from the Stop the Bombing of Yemen campaign said. Like many Yemenis, al-Matari believes that President Biden used his seeming opposition to the highly controversial war as a trump card to boost his chances in last year’s presidential election.

For its part, Ansar Allah has outright accused the Biden administration of giving a green light to Saudi forces to attack al-Bayda so that it can more easily provide al-Qaeda and IS with weapons and intelligence information. Officials in Sana’a say the Biden administration is playing with fire by not only destroying peace efforts but also resettling and supporting al-Qaeda, especially amid a Taliban resurgence in Afghanistan.

Dhaif Allah al-Shami — the spokesman for the Sana’a-based Yemeni government run jointly by Ansar Allah and the General People’s Congress, the largest political party in the country — said that the United States had “run the recent military escalation in al-Bayda.” He accused the Biden administration of being behind the plan, stating: “The United States, which falsely and wrongly claims to be concerned with peace in Yemen, is [the one] fueling the bitter clashes in the al-Zahir district of the province.”

Major General Nasser Al-Atif, minister of defense in the Ansar Allah-led government, said in a statement on Monday:

We have a new strategy to face the new Saudi escalation that will cost the coalition a heavy price if they continue to support terrorist elements, and this is something they should understand well. Saudi Arabia and the United States claim that they are keen on peace, stopping the war, and addressing the inhumane issues, but in fact they are talking all this just for media consumption and the exploitation of international and regional positions.“

Ahmed AbdulKareem is a Yemeni journalist based in Sana’a. He covers the war in Yemen for MintPress News as well as local Yemeni media.