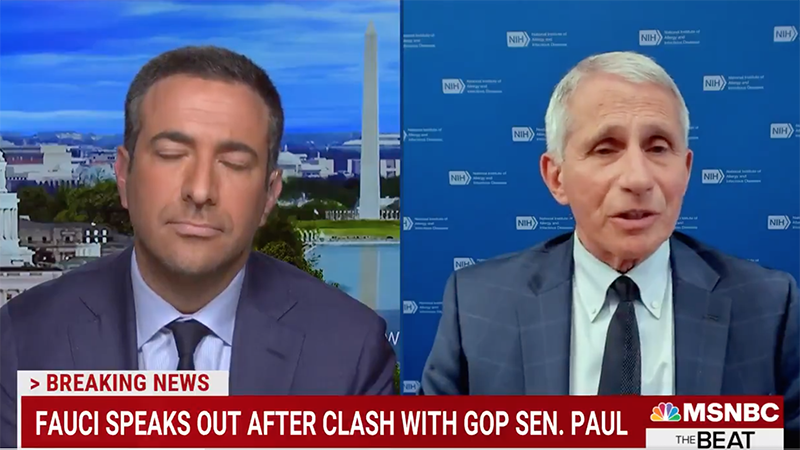 Anthony Fauci was once again provided a platform Thursday by MSNBC to deny any wrong doing on his behalf as regards funding gain of function research in Wuhan. Fauci accused Rand Paul of “slander” after the Senator again clashed with Fauci this week, accusing him of lying before Congress.

As we reported Wednesday, Senator Paul has vowed to seek a criminal referral from the Department of Justice.

“I don’t any take great pleasure, Ari, in clashing with the senator,” Fauci declared, adding “I have a great deal of respect for the institution of the Senate of the United States.”

“But he was completely out of line,” Fauci continued, declaring “He totally distorted reality. And he made some inflammatory and, I believe, slanderous remarks about lying under oath, which is completely nonsense.”

“I mean, and some of the things he says are so distorted and out of tune with reality, I had to call him on that,” Fauci further stated, adding “I didn’t enjoy it, but I had to do that because he was completely out of line. Totally inappropriate.”

Note that Fauci didn’t actually provide any details or evidence against what Senator Paul said, because he can’t.

And the MSNBC host was just fine with that.

Rather bizarrely, over at CNN a nugget of truth did emerge as regards Fauci, when conservative commentator Mary Katharine Ham was allowed to slam the media for “fangirling” over Fauci.

“Senator Paul understood the assignment here,” she continued, adding “He’s asking about a tough subject that admittedly none of us are experts on, but I would like to know a lot more about. And despite his protestations, tough questions for Dr. Anthony Fauci are not attacks on science itself.”

Ham further slammed Fauci for repeatedly “shading” the truth, pointing to Fauci’s dismissal of the lab leak possibility, noting that is why he is not trusted by Americans.