Myanmar’s junta rulers have maintained an iron grip on the country since the February 2021 coup d’etat which saw elected leaders of the National League for Democracy get rapidly deposed and placed under arrest by the army.

But given the United Nations has not recognized the coup government under the generals, Myanmar’s ambassador to the UN Kyaw Moe Tun has actually remained in place despite him also saying he does not recognize the new government. He’s continued to represent the now deposed National Unity Government at UN meetings in New York City.

But the military has said he no longer represents the country. State TV announced last February that he’d "betrayed" Myanmar and was fired, particularly after his public calls for outside countries to employ "all means necessary" to reverse the army takeover.

This week it was revealed that a mysterious threat on his life was made, which got the FBI involved and resulted in beefed up personal security. Reuters reported earlier in the week:

Myanmar’s ambassador to the United Nations, denounced by his country’s military rulers, said on Wednesday that an apparent threat had been made against him and U.S. authorities had stepped up his security.

"Reportedly there is some threat. The police are working on it. Necessary security has be provided by the police," Kyaw Moe Tun told Reuters. He was made aware of the threat on Tuesday.

On Friday US Attorney’s Office Southern District of New York announced the arrest of two Burmese nationals believed behind the plot against Ambassador Kyaw Moe Tun. A press statement described a plan to "assault and make a violent attack upon Myanmar’s Permanent Representative to the United Nations." 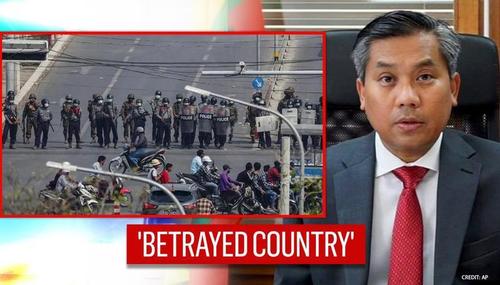 US federal charges were filed after agents were tipped off to the plot. US Attorney Audrey Strauss detailed in the Friday statement: "As alleged, Phyo Hein Htut and Ye Hein Zaw plotted to seriously injure or kill Myanmar’s ambassador to the United Nations in a planned attack on a foreign official that was to take place on American soil."

In what sounds like something out a Hollywood movie, the pair were alleged to have been touch with an international arms dealer out of Thailand who helped coordinate a murder-for-hire plot.

"Shortly after agreeing on the plan, ZAW contacted HTUT by cellphone and transferred approximately $4,000 to HTUT through a money transfer app as an advance payment on the plot to attack the Ambassador," the statement continues. "Later, during a recorded phone conversation with ZAW, HTUT discussed how the planned attackers would require an additional $1,000 to conduct the attack on the Ambassador in Westchester County, and for an additional payment the attackers could, in substance, 'finish off’ the Ambassador."