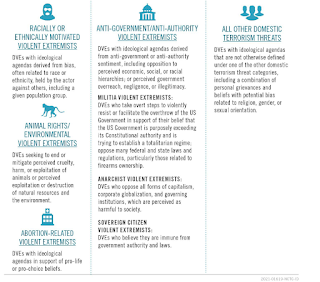 The War on Terror has a new target: distrustful Americans.

The absurdity of Homeland Security's creation of another 'domestic extremist group' is countered only by the mass media's pandering of anything terror related.

The FBI describes how they allegedly investigate terrorism in America by mentioning domestic extremism 5 times on their website.

"The Bureau works closely with its partners to neutralize terrorist cells and operatives here in the United States, to help dismantle extremist networks worldwide, and to cut off financing and other forms of support provided to foreign terrorist organizations."

The word extremist, according to the Cambridge Dictionary, means "someone who has beliefs that most people think are unreasonable and unacceptable." Merriam Webster defines extremist as a "belief in and support for ideas that are very far from what most people consider correct or reasonable."

This fits in nicely with the FBI's term "Black Identity Extremism" which they used until the BLM protests of 2020, when they were forced to appear to be politically correct and change their terminology.

"In late 2017, the FBI discontinued using the term "Black Identity Extremism." As a result, the FBI's Consolidated Strategy Guide for Fiscal Year (FY) 2020 does not use that term, and the only reference to the term in the FY20 19 Consolidated Strategy Guide is a footnote indicating that the term is no longer utilized by the FBI. As detailed below, the FBI has updated its terminology and currently uses the term "Racially or Ethnically Motivated Violent Extremism."

The FBI's letter went on to say that after conducting an annual "iterative process" they felt it best to rename "Black Identity Extremism."

"The FBI continually challenges, reviews, and evaluates intelligence to ensure the appropriate identification and categorization of each threat. This is an iterative process, based on analysis of a threat's impact and mitigation efforts, and is refreshed annually."

The FBI's "iterative process" concerning Black civil rights demonstrations has nothing to do with challenging, reviewing and evaluating domestic terrorism categorizations.

"In consultation with United States Intelligence Community partners and other partners at the National Security Council, the FBI has attempted to effectively integrate all types of racially or ethnically motivated violence into one threat category..."

Worried about offending minorities, the FBI has decided that the best thing to do is to categorize all minority civil rights demonstrations as Racially or Ethnically Motivated Violent Extremism.

According to the White House, domestic violent extremist's ideological agendas are derived from anti-government, anti-authority sentiment or perceived government overreach.

Using that definition, it's a wonder that law enforcement has not categorized millions of Americans who took part in the BLM protests as Militia Violent Extremists.

"Like many other social media users, some MVEs are transitioning to other social media platforms perceived as either having more permissive terms of service policies or viewed as providing enhanced data privacy, such as MeWe and Parler, according to open source reporting."

"In 2020, MVEs used or expressed interest in using a variety of more secure and often encrypted messaging applications—including Zello, Telegram, Signal, and Threema—to discuss operational activity, according to FBI and open source reporting. In May, an identified Maryland-based MVE used Signal and the search engine DuckDuckGo to discuss targeting law enforcement and share bomb making instructions, according to FBI reporting."

According to Homeland Security, people using platforms like MeWe, Parler, Zello, Telegram, Signal, Threema and DuckDuckGo to avoid government surveillance must be monitored because they could be Militia Violent Extremists.

Despite having no credible evidence that citizens trying to evade warrantless government surveillance are extremists, Homeland Security wants to give corporations more powers to monitor them.

"Existing partnerships with international and private sector partners through the GIFCT, Tech Against Terrorism—an organization which empowers smaller, emerging social media companies to increase their capacity to enforce their terms of services as they address terrorism, violent extremism, and mobilization to violence on their platforms—and a variety of other counter violent extremist messaging working groups." 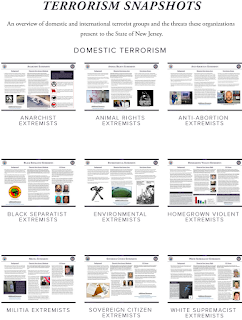 "As these acts of malice, violence, and threats against public school officials have increased, the classification of these heinous actions could be the equivalent to a form of domestic terrorism and hate crimes. As such, NSBA requests a joint expedited review by the U.S. Departments of Justice, Education, and Homeland Security, along with the appropriate training, coordination, investigations, and enforcement mechanisms from the FBI..."

A recent FBI memorandum dated October 4th suggests that a 10th domestic/extremist group is all but a certainty.

"In the coming days, the Department will announce a series of measures designed to address the rise in criminal conduct directed toward school personnel. I am directing the FBI, working with each United States Attorney, to convene meetings with federal, state, local, Tribal and territorial leaders in each federal judicial district within 30 days of the issuance of this memorandum."

It is hard to imagine a pre-9/11 America believing that we have 9 and counting domestic, terrorist groups in America. So why would a post 9/11 America believe it?
How many domestic extremist groups will the FBI/DHS claim America has in 2022? Will it be 12, 16 or perhaps 20? Only time will tell.