2 years ago today, Event 201 pandemic simulation was ran by the World Economic Forum... 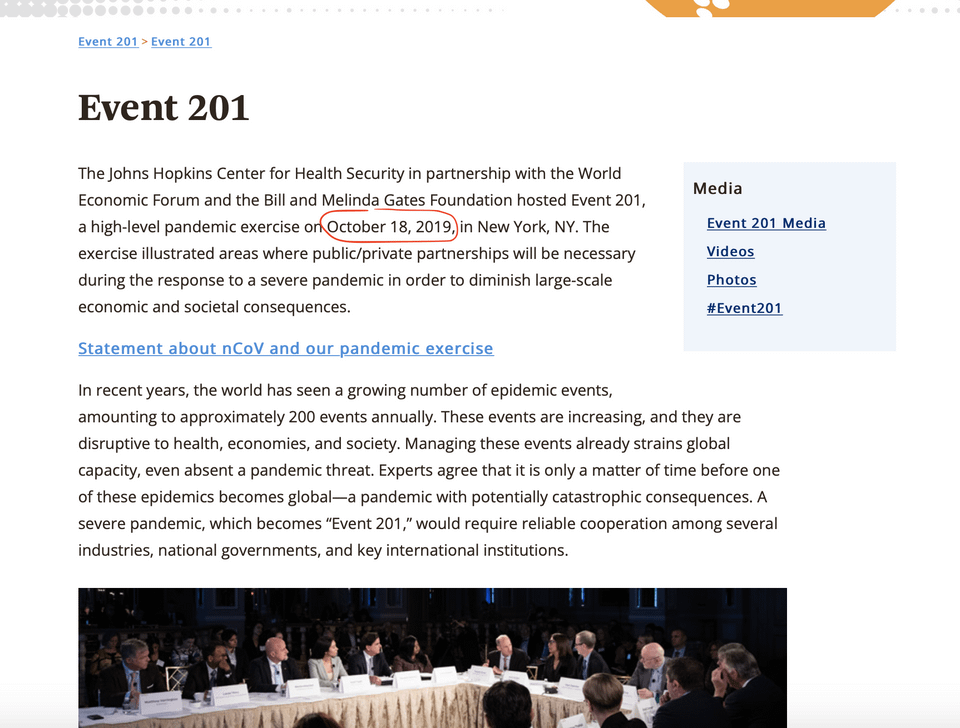 Back in 2001, it was a smallpox outbreak, set off by terrorists in U.S. shopping malls. This fall, it was a SARS-like virus, germinating quietly among pig farms in Brazil before spreading to every country in the world.

That center's latest pandemic simulation, Event 201, dropped participants right in the midst of an uncontrolled coronavirus outbreak that was spreading like wildfire out of South America to wreak worldwide havoc. As fictional newscasters from "GNN" narrated, the immune-resistant virus (nicknamed CAPS) was crippling trade and travel, sending the global economy into freefall. Social media was rampant with rumors and misinformation, governments were collapsing, and citizens were revolting.

Event 201 is the fourth such exercise hosted by the Johns Hopkins center, which works to prepare communities for biological threats, pandemics, and other disasters. The simulations started with 2001's Dark Winter, which gathered national security experts for its simulated smallpox outbreak. The groundbreaking event turned out to be influential in shaping U.S. efforts around pandemic preparedness—particularly due to its timing, right before 9/11.

"Dark Winter resulted in more than a dozen congressional hearings, was briefed to the White House, and ultimately influenced the decision to stockpile enough smallpox vaccine for all Americans," Inglesby says.

That simulation and its two successors—Atlantic Storm, conducted in 2005, and last summer's Clade X—have also demonstrated lasting value as educational and advocacy tools, with reenactments or modified versions taking place in settings including universities, the CDC, and Capitol Hill, according to Inglesby. "These exercises have a long fuse," he says.

For Event 201, hosted in collaboration with the World Economic Forum and the Bill & Melinda Gates Foundation, the experts added a new layer of realism by reaching beyond government and NGOs to leaders in the private sector and business community. Participants included representatives from NBCUniversal, UPS, and Johnson & Johnson.