The U.S. Supply Chain Crisis Will Get Worse - As Will Inflation

By now it is obvious to everyone that the U.S. has a supply chain problem. 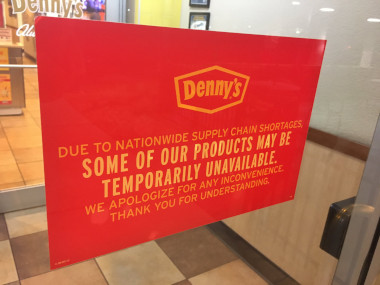 The highly optimized 'lean' transport chain from producers to consumers has clogged up.

This is a consequence of the two shocks the pandemic has caused in consumption patterns. Orders dropped hard at the start on the pandemic when people went into lockdown. A second shock came when consumption recovered to a higher than ever levels.

The higher consumption was not for services as restaurants were often still closed. Instead the money went into buying things. Things that are produced elsewhere.

Any lean supply system without reserves and redundancies will break down under such impulses. The supply chain has many critical points. Producers in Asia need containers to ship their goods. The containers must go to harbors. Ships must be available as well as loading capacity. The harbor at the receiving end must have capacity to unload the containers and to store them. Trucks must be available as well as container trailers. The goods then go to distribution centers where there must be capacity to repack them and to send them out again. The empty containers must travel back to their origin to get filled again.

All these levels need people capable and willing to work. If one element of the chain reaches its maximum capacity and clogs up all others will be affected. Meanwhile demand for goods continues to be strong. More goods are still coming in while every element of the system that still had reserves is clogging up too.

The supply chain from Asia to the U.S. has reached that point. Other global supply chains are also straining from side effects of the pandemic and may well clog up too.

One major problem are the U.S. harbors on the west coast. Even before the pandemic they were already the least efficient of the world:

In a review of 351 container ports around the globe, Los Angeles was ranked 328, behind Tanzania’s Dar es Salaam and Alaska’s Dutch Harbor. The adjacent port of Long Beach came in even lower, at 333, behind Turkey’s Nemrut Bay and Kenya’s Mombasa, the groups said in their inaugural Container Port Performance Index published in May.

Describing the problems at every level of the U.S. side of the supply and distribution chain Ryan Johnson, a twenty year truck driver, explains why going to 24/7 will not help and why the problems will get worse.

Truck drivers have to sleep, at least once a while. They also have to make money. They get paid by the load, not for the time it takes them to load it, drive it from A to B and to unload it. If there are hours long lines for loading and unloading the work is simply unprofitable:

So when the coastal ports started getting clogged up last spring due to the impacts of COVID on business everywhere, drivers started refusing to show up. Congestion got so bad that instead of being able to do three loads a day, they could only do one. They took a 2/3 pay cut and most of these drivers were working 12 hours a day or more. While carriers were charging increased pandemic shipping rates, none of those rate increases went to the driver wages. Many drivers simply quit. However, while the pickup rate for containers severely decreased, they were still being offloaded from the boats. And it’s only gotten worse.

The U.S. once had a well regulated transport system. But that has long been neo-liberalized to death.

The system will not unclog itself because the incentives are set all wrong. The people who have an interest in removing the blocks are the fright buyers and sellers. But the container owners, harbors and distribution centers and freight carriers are now simply increasing their prices for prioritized goods without delivering more capacity. They even can ask for penalties from those who have containers stuck in their system. They refuse to pay more for their workers and drivers and to hire and qualify additional ones.

US Transportation Secretary Pete Buttigieg predicted on Sunday that supply chain issues plaguing multiple industries at the moment are going to continue as long as the coronavirus pandemic does.

Confronted about the supply chain issues by Fox News’ Chris Wallace – including the fact that standstills at the Port of Los Angeles have only worsened after it began operating on a 24/7 basis – Buttigieg could only say that businesses should expect relief from the issues when the pandemic ends as the problems are a “direct” results of the virus’ strain on the world.
...
“Fundamentally, it’s up to the producers, the shippers and the retailers and we’re doing everything we can to help them move those goods across the infrastructure that’s often outdated,” he said.

The severity of the supply chain crisis combined with the near-certainty that the only actor that could partially (stress partially) clear this logjam is the Feds. They are guaranteed not to do enough even if they understood how the moving parts interconnect.

So it is now a safe bet that the Democrats will suffer a wipeout in the midterms, even if Biden gets his big bills passed (some stimulus!) and there is no Covid surge. Worsening supply shortfalls, particularly of drugs and medical staples, will make the bad press of the Iran hostage crisis look tame.

The supply chain crunch will lead to price increases and will have strong inflationary effects.

The central bankers, which have doused the economy with way too much money, have yet to understand that the supply chain problem is systemic and will have long term consequences:

The world’s top central bankers acknowledged that inflation, which has spiked higher across many advanced economies this year, could remain elevated for some time — and that though they still expect it to fade as pandemic-related supply disruptions calm, they are carefully watching to make sure that hot price pressures do not become more permanent.

Jerome H. Powell, the Federal Reserve chair, spoke Wednesday on a panel alongside Christine Lagarde, president of the European Central Bank; Andrew Bailey, governor of the Bank of England; and Haruhiko Kuroda, head of the Bank of Japan.
...
“It is frustrating to acknowledge that getting people vaccinated and getting Delta under control, 18 months later, still remains the most important economic policy that we have,” Mr. Powell said. “It is also frustrating to see the bottlenecks and supply chain problems not getting better — in fact, at the margin, apparently getting a little bit worse.”

“We see that continuing into next year, probably, and holding inflation up longer than we had thought,” Mr. Powell said.

Powell and his colleagues still see the inflationary effects as transitory and rejected to act on them. But the supply chain crunch will have not only temporary price effects. It shows that the U.S. transport system is too 'lean' and too cheap in its current configuration. It needs updated infrastructure, better paid people, the right incentives and more redundancies. All of these will continuously cost more money and have long term inflationary effects.

Echoes of an earlier, darker period of economic history are growing louder. When I warned in early 2020 of a 1970s-style stagflation, my concerns were primarily on the supply side. Today a full-blown global supply shock is at hand: energy and food prices are soaring, shipping lanes are clogged and labour shortages prevalent.

One popular theory is that supply disruptions and price spikes are transitory glitches related to the pandemic that will ultimately self-heal. The inflationary build-up of the early 1970s was also presaged by a focus on transitory events: the Opec oil embargo and El Niño-related weather disturbances.
...
This has lured [central banks] into a “sequencing trap” — responding to surprises, such as inflation, first through a tapering of asset purchases and then by raising the benchmark policy interest rate in baby steps. Yet aggregate demand is likely to be far less sensitive to central bank balance sheet adjustments than to the real cost of money, and monetary policy actions have a long lag time. This is particularly worrisome for the Fed, which has embraced a new “average inflation targeting” approach designed to delay policy responses to compensate for earlier undershoots of inflation.
...
The lessons? Inflation is unlikely to peak soon. What seems transitory now will last longer than we think. And it will take far more monetary tightening than financial markets are expecting to avoid stagflation 2.0.

Roach is not the only one who warns of economic stagnation combined with high inflation. In his remarks at last week’s G20 summit Russia’s President Vladimir Putin made it his major point. He emphasized that the necessary changes in monetary policies must be accompanied by social measures:

Last year the economic authorities of the G20 member countries and many other countries decided to significantly increase their budget deficits against the backdrop of the deep crisis caused by the pandemic, which allowed for launching global economic recovery. However, such extraordinary measure accompanied by securities buyouts by central banks should be limited in time. In fact, this is what was said here earlier.
...
Excessive stimulation has resulted in the general lack of stability, growing prices of financial assets and goods in certain markets such as energy, food, etc. Once again, significant budget deficits in the developed economies are the main cause of these developments. With these deficits persisting, there is a risk of high global inflation in the medium term, which not only increases the risk of lower business activity but reinforces and exacerbates the inequality that was also mentioned today.

That is why it is important to prevent aggravating stagflation and instead do what can be done to normalise the budgetary and monetary policies, improve the quality of demand management in the economy and update economic priorities – and primarily prioritise overcoming inequality and boosting public welfare.

Higher taxes for the top 1%, who have profit most during the pandemic, can correct the budget deficits. The central banks can then stop the securities buyouts that have financed the deficits and doused the rich. They can raise the interest rates to starve of inflation before it increases further. A part of the additional money the states take in must be distributed to the lower income people who are most affected by the increase of basic prices.

While that may sound like a reasonable plan one thing is assured. It will not be acted on.

The current lack of government action to fix the supply chain issues shows that things will only change after a total breakdown has happened. We ain’t there yet but it is by now assured to happen.