When commenting on yesterday’s SPR release announcement by the Biden admin and several assorted hanger-on nations - which has backfired spectacularly sending the price of oil soaring now that the rumor can no longer be sold so the news has to be bought in line with every single SPR release in the past... 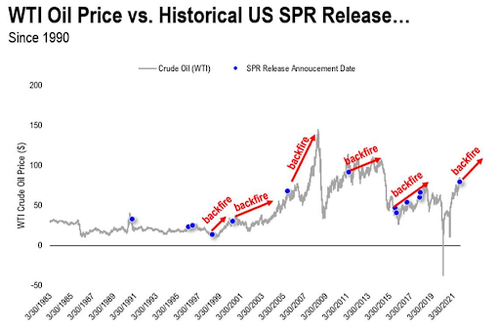 ... we said that not only was the release far to smmal, but that in retaliation for the SPR release, "OPEC could easily consider halting its production hikes to offset the detrimental SPR impact of lower oil prices on the needed recovery in global oil capex, likely justifying such action as prudent in the face of COVID demand risks."

Well, fast forward just a few hours when moments ago the WSJ reported that the leaders of OPEC+ and the world’s two top oil producers Saudi Arabia and Russia, are considering a pause to their recent efforts to provide the world with more crude, citing to people familiar with those discussions. The move, as expected, is in retaliation to Washington releasing tens of millions of barrels of oil in an effort to lower prices.

As a reminder, OPEC+ is meeting next week to review the long-term deal they reached earlier this year to boost their collective oil output - the deal involves boosting output by 400,000 barrels a day each month through next year, until the group hits its pre-pandemic pumping level and follows a sharp cut in output in 2020 as demand evaporated amid Covid-19 lockdowns.

However, it now appears that OPEC+ may change its mind and not raise output at all; and while Biden is quick to note that oil prices have hovered near multiyear highs, OPEC and other forecasting agencies have struggled to predict demand amid the on-again-off-again nature of Covid-19 restrictions. Several countries in Europe, for instance, are moving ahead with, or considering, fresh restrictions that could sap economic activity—and by extension demand for oil.

Meanwhile, the elephant in the room - the Biden-led crude release of up to 70 million barrels threatens to further scramble the supply-demand balance. As a result, and to compensate for the new supply, the WSJ confirmed our prediction and writes that Riyadh and Moscow are now considering a pause of the group’s monthly collective increase, even as US lackey, UAE - an OPEC member that has clashed with Saudi Arabia over OPEC policy in the past, and Kuwait are resisting a pause. Then again, what Russia and Saudi Arabia want, they will get.

Saudi Arabia sees the released crude as potentially swelling global supply and threatening to reduce prices, according to people familiar with the country’s thinking.

The question then is what will Biden do after a potential escalation in the oil war, and whether the US will halt oil exports in counter-retaliation. Such a move, as Goldman explained yesterday, would lead to a historic surge in oil prices and all hell breaking loose. This is what we said yesterday:

One final point: while not even the Biden admin is dumb enough to consider it, some have speculated that once the SPR release is shown to be a total disaster, Biden may implement an oil export ban. The problem: this would have catastrophic consequences. As Goldman explains, a US export ban would significantly disrupt the US and global oil markets, and potentially be a counterproductive tool to attempt to lower oil prices.

The US exports 3 mb/d of crude and domestic pipelines would not be able to reroute these volumes to US refiners, which further don’t have enough capacity to process this much crude. This would leave excess US crude supply quickly reaching tank tops and forcing shut-in production, with investment and production soon to enter significant declines. At the same time, the global market would be deprived of 3 mb/d of US supply (light sweet crude that is Brent like in quality). Brent prices would therefore need to spike to push demand lower as there is simply not enough spare capacity (nor suitable crude) to replace US lost exports.

Finally, with the US an importer of gasoline from Europe, US gasoline prices would spike to curtail domestic demand, creating a negative hit to US economic activity.

Come to think of it, this is precisely what Biden will do next.