By Wolf Richter for WOLF STREET.

Homebuilders are on a wild ride, beset by shortages of materials and supplies, near-eternal lead times, spiking construction costs, difficulties in hiring, and projects that are bogged down. And inventories for sale, driven by homes that are still under construction and cannot be completed due to the shortages, are piling up.

Inventory of single-family houses for sale at all stages of construction has been surging throughout the year 2021 and in December hit 403,000 (seasonally adjusted), up 58% from a year ago, and the highest level since August 2008. This represents about 6 months’ supply, according to date from the Census Bureau today:

Massive supply in the pipeline, by stage of construction.

The number of single-family houses for sale that were still under construction jumped to 263,000 in December, the highest since August 2007 (red line in the chart below).

The number of houses for sale where construction hasn’t started yet remained at 101,000 in December. The past three months were all above 100,000, the highest in the data, having edged past the prior high of April 2006 (purple line).

But the number of completed houses for sale has been bouncing along record lows in all of 2021, as builders face shortages that prevent them from completing the houses. These shortages range from windows to appliances. And once houses are completed – if they haven’t sold already during the prior stages – sell quickly. In December, 39,000 completed houses were for sale (green line). 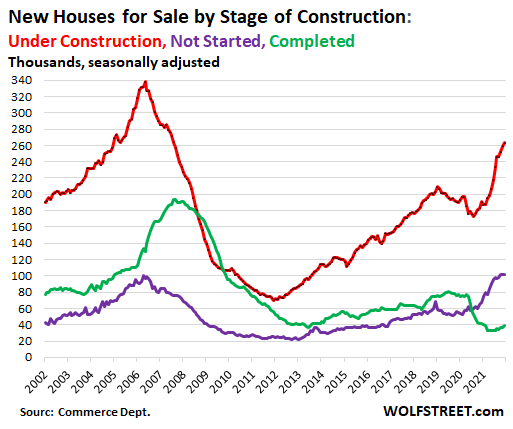 Construction costs spike most in at least 50 years. 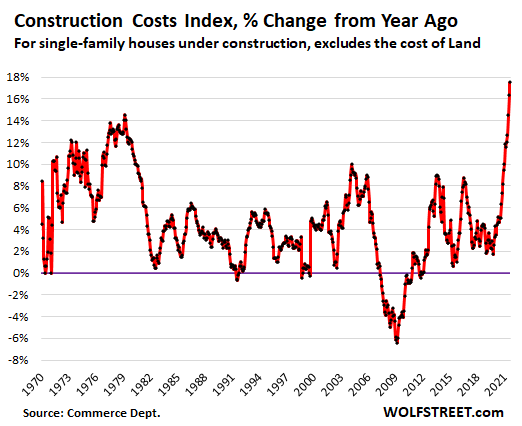 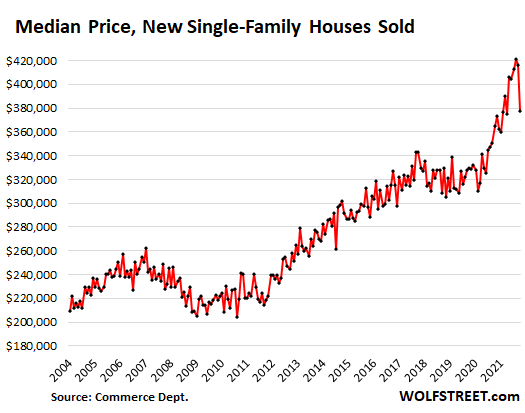 Sales of New Houses, in Total and by Stage of Construction.

Sales of new single-family houses in December, at all stages of construction combined, rose from November, but was still down 14% from a year ago, to a seasonally adjusted annual rate of 811,000 houses. Sales remain far below the boom years of 2002-2006.

Apartment buildings and condo buildings are not included here, and the huge boom in multi-family construction in urban centers over the years is not reflected here. This is just sales of new single-family houses: 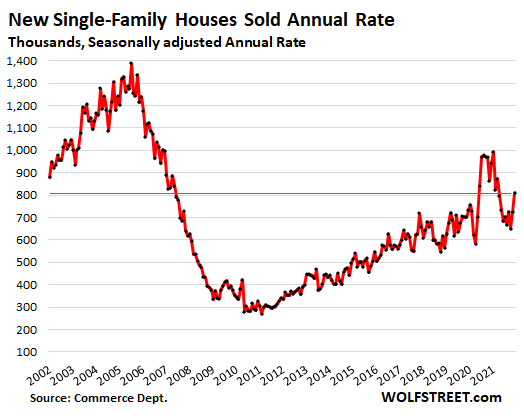 Within those total sales:

The share of completed houses as a percent of total sales dropped to 23.1%: 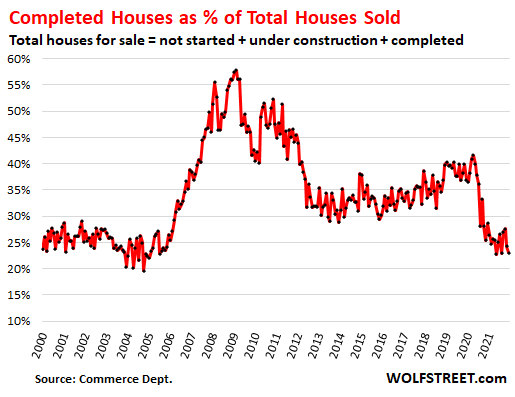 Sales of houses under construction jumped to a seasonally adjusted annual rate of 393,000 houses in December, the highest in a year, as more buyers who couldn’t find a completed house ended up buying a house that was still under construction.

The share of under-construction houses as a percent of total sales backed off from the record high in November, to 48.5%: 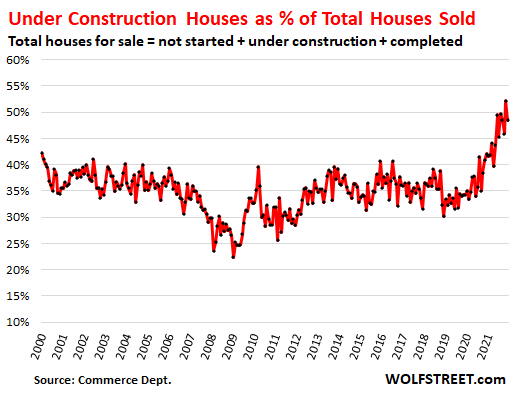 Sales of houses where construction hasn’t started yet – customer buys a house that the homebuilder will then build for the customer – jumped to a seasonally adjusted annual rate of 231,000 houses.

The share of not-started houses as a percent of total sales jumped to 28.5%, just a little below the middle of the range since 2021: 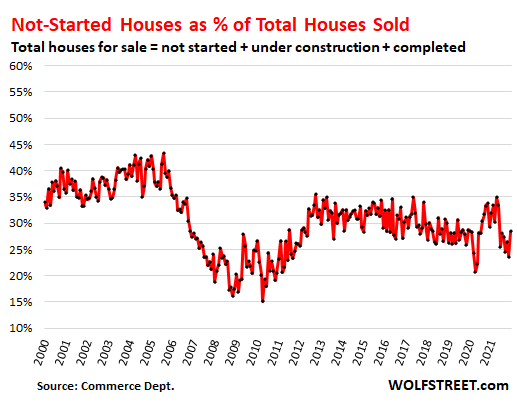 What these charts are showing are the results of the massive distortions that have spread across the economy. The distortions include interest rates (now surging) that are still far below the rate of inflation; artificially stimulated demand for goods of all kinds leading to shortages and transportation chaos; and labor shortages of the type we haven’t seen before. So now there is lots of supply of new houses, but that supply is building up in the pipeline and much of it remains stuck there.