On February 15 Professor John J. Mearsheimer gave a talk (video) about the Ukraine crisis. He starts out (at 3min) by explaining who has caused it:

The United States, mainly, and its allies are responsible for this crisis.

I recommend to watch it in full.

Like me and many other analysts Mearsheimer did not expect that a Russian move into the Ukraine would happen. Why the Russian government finally decided to take that step is not clear to me. I believe that Zelensky’s lose talk about acquiring nuclear weapons for the Ukraine was one of the decisive factors. Who told Zelensky to come up with that?

The Russian operation started with a volley of cruise missiles that destroyed air defense radars and missiles, military airports, ammunition depots and some military harbor. The followed ground attacks by armored forces from Belarus southward, form Russia westward and from Crimea northward. These progressed well though some tanks got destroyed by anti-tank missile fire. The ground moves have air cover and heavy artillery moving up behind them.

This map does not show the progress of the operation but a likely operational plan the Russian military might have. 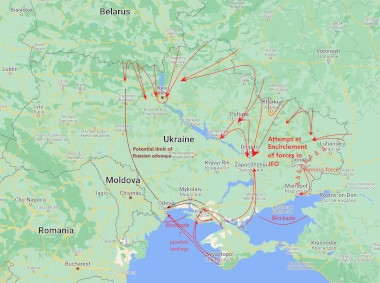 The plan seems to be to a. take Kiev, b. encircle the 60,000 strong Ukrainian force that was preparing to attack Donbas c. take the coast.

A large fleet of helicopter with Russian parachuter took the Antonov / Hostomel airport some 20 miles from Kiev. They did not even bother with CNN filming them. A fleet of transport planes from Russia will soon land there and deliver more forces.

The nuclear reactors at Chernobyl have been secured by Russian troops.

The Russian Ministry of Defense claims Russian aircraft have destroyed, 83 ground targets, 2 Ukrainian Su-27s, 2 Su-24s, 1 helicopter, 4 Bayraktar TB-2 drones. One Ukrainian Su-27 has landed in Romania. The pilot was probably not interested in getting killed.

The Ukrainian air-defenses, airforce, navy, most large command and control elements and depots have ceased to exist. The moral of its ground troops will be generally low though some of the Nazi battalions may still be willing to fight.

It is not know yet how far the attack from the north has reached towards Kiev. The attack from Russian mainland is currently fighting around Kharkiv, the Ukraine’s second biggest city. The most successful attack was from Crimea as it has progressed significantly. The canal which provides water to Crimea and had since 2014 been blocked by the Ukraine has been liberated. Dnieper water is again flowing to the island.

Russia has so far only committed a relatively small ground force. More troops will follow when the first echelons make more progress. Russia has held back from using ballistic missiles and only used cruise missiles. That is probably a message to the 'west' that Russia could escalate if needed.  There has also been little use so far of Russia’s electronic warfare elements. Internet and telephone are working in all of the Ukraine except for Kharkiv which seems to have Internet problems.

The Russian stock market is down but gold, oil and gas are up and Russia has so far lost zero money.

The U.S. is pushing its European 'allies' to commit economic suicide by sanctioning everything Russia. The U.S. should be more careful. Its is one of the biggest buyers of Russian oil and its aircraft industry depends on titanium from Russia. Russia surely knows who is trying to hurt it the most and it surely knows how, and has the means to, hurt back.