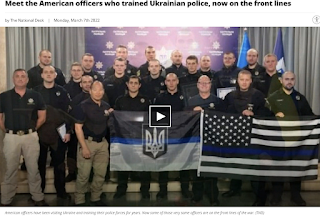 The hypocrisy that is American policing is on full display for the entire world to see during the Russian invasion of Ukraine as this picture illustrates.
For over 36 years, the U.S. Department of Justice (DOJ) has been using the International Criminal Investigative Training Assistance Program (ICITAP) to turn police forces across the globe into mirror-images of U.S. police departments.
It has been 3 years since the DOJ first used American police officers to train the Kyiv Patrol Police Department or Ukraine's national police force.

"On May 4, 2019, twenty-three officers from the Kyiv Patrol Police Department of the National Police of Ukraine graduated from the first field training program - the Mentoring Training Officer Project (MTOP) - in the history of the country’s police agencies."

Since 2019, countless Ukrainian police officers have been trained in American policing tactics.

"The Patrol Police Department remains the most recognized successful reform effort of the National Police of Ukraine since the 2014 revolution spurred civil society to demand substantive changes in policing. In Ukraine, ICITAP partners with the State Department’s Bureau of International Narcotics and Law Enforcement Affairs on this project."

As the DOJ points out, not even a worldwide pandemic could stop American police from training Ukraine's national police.

"Initially, the course was to be instructed by ICITAP TDY instructors; however, the TDY instructors had to cancel last minute due to COVID. Nevertheless, the training needed to continue since many of the Ukrainian police officers traveled long distances to attend."

Fox 26 Houston reveals how law enforcement across the country are proud to turn Ukrainian police officers into tactical SWAT teams.

"They want what you and I want. We enjoy the freedom every day,” said Lt. Randy Upton, a retired Houston police officer. "When you heard them talk about their country and how proud they were of a free Ukraine, I mean, they are truly patriots," Chief Spike Jones in Kenton County, Kentucky said.

The DOJ's quest to turn every police force in Europe into a mirror-image of American police departments has spread to Albania, Bosnia, Herzegovina, Croatia, Kosovo, Montenegro, North Macedonia, and Serbia.

The DOJ's "ICITAP Milestones" section is a one page descriptor on how American police have turned police departments in countries on every continent into mirror-images of U.S. policing. (ICITAP is being used in Africa, the Middle East and in Asia and the Pacific.) 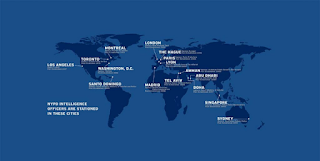 "The NYPD has the most comprehensive counterterrorism program in the world. For nearly 20 years, the Foundation has made it possible for the NYPD to be positioned worldwide through the International Liaison Program to help NYC react in real-time to potential terror threats. The overseas officers partner with local law enforcement to collect and disseminate terrorism-related information needed to safeguard our city."

As N+1 Magazine warned,"Each day the global policeman assembles itself anew through the work of hundreds of global policemen (and policewomen): current and former US police officers who train, equip, and advise other countries’ police. Cops have become frontline US diplomats. Policing today is a triumph of globalization."

ICITAP can't stop boasting about America's influence over foreign police departments which extends to a minimum of 44 countries and 16 field offices all over the globe.

It is apparent that the explosive growth of social media surveillance, digital ID's, vaccine passports, license plate readers and facial recognition across the globe is being led by American policing.

For years now, and especially since the pandemic, stories of police abusing people's freedoms have been increasing in direct relation to the expansion of American policing. American policing has become a global threat to the freedoms of every person on every continent.