Khalid Turaani knows what it's like to be on a secret government watchlist.

He learned about his status on it, not from an official letter or communication, but when TSA officers stopped him from flying one day in 2017.

"They told me that I am on the no-fly list and that I cannot board that flight," Turaani recalled in an interview.

Results from a public records request he submitted that same year to the Department of Homeland Security confirmed – in writing – what he suspected: that his name had been assigned "no-fly" status.

With the help of an attorney at the Constitutional Law Center for Muslims in America, Turaani successfully challenged the designation through the formal redress process. In December 2017, DHS sent him a letter, writing that it had "made any corrections" including those "that may assist in avoiding incidents of misidentification" but never disclosed why Turaani had been on the list in the first place. He has not been blocked from flying since. The attorney working on his behalf shared those documents with Hearst Television.

"So much harassment," Turaani said. "And it was really frustrating. And to tell you the truth, it was also humiliating."

Amtrak to screen passengers against watchlist

Soon, more people may find themselves ensnared by the same screening.

Amtrak has asked the TSA to start screening some of its passengers against the Terrorist Screening Database watchlist maintained by the Threat Screening Center to see if known or suspected terrorists have been riding the rails, according to a U.S. Department of Homeland Security privacy impact document obtained by the Hearst Television National Investigative Unit. 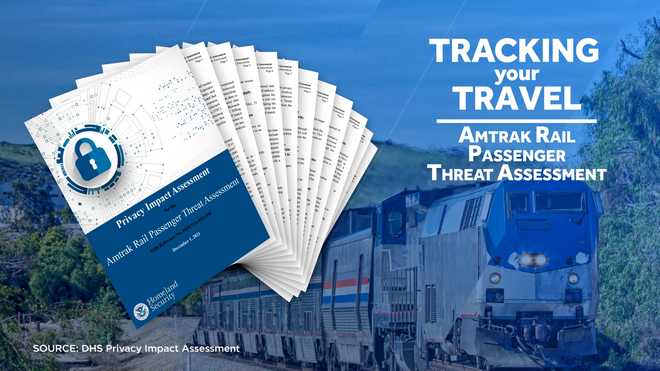 The program, part of the Amtrak Rail Passenger Threat Assessment and which has not been previously reported, would compare personal passenger information from Amtrak – which may also later include a traveler's "publicly available social media" profiles viewed by DHS personnel – to the government's terrorist screening database.

If the TSA finds any matches, the agency would then provide Amtrak with statistical and anonymized results that would not include passenger names, at least for this initial stage.

Currently, airline passengers can opt out of watchlist screening by choosing not to fly. But Amtrak passengers apparently won't have that option because the screening will initially use "several months" of past travel on the busy Northeast Corridor, according to the threat assessment privacy document. Amtrak routes go through 46 of the 50 states. A spokesperson for the railroad did not respond to a question about whether passengers will be able to ask Amtrak to exclude past travel from the new screening.