(Contd. From A Brief Exploration of COVID-Induced Mass Psychosis)

"But I, being poor, have only my dreams;
I have spread my dreams under your feet;
Tread softly because you tread on my dreams."

-W.B. Yeats, "He Wishes For the Cloths of Heaven" 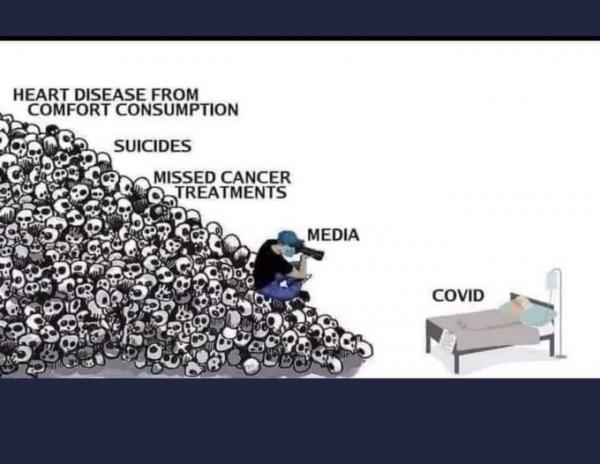 The true firsthand tales of suffering and heartbreak below reflect the broader reality that we have all witnessed from afar in horror – when they hit home, though, their visceral cruelty becomes more palpable, more relatable, and all the more heartbreaking.

Such is the inherent value of personalizing the trauma inflicted upon all of us – to one degree or another – so that the real-world human costs of the medical establishment's crimes become real.

Decency (and the Divine, if you are spiritually inclined) requires us to humanize the real-world costs of the shocking treatment (or lack thereof) in hospitals and clinics across the world.

The highly coordinated, transnational COVID "public health" response has normalized and codified the most callous, inhumane approaches to medical care since the medieval dark ages.

Health authorities have used the COVID pandemic to postpone much-needed surgeries and treatments for non-COVID health concerns. Routine medical treatment is now considered a privilege (often reserved for the vaccinated and/or PCR negative), not a right.

In a document titled COVID-19 testing processes and patient protections for resumption of elective surgery, the Elsevier Public Health Emergency Collection lays out the procedures for undertaking elective surgery in clinical settings.

Here is the gist of it:

"Testing of pre-surgical patients, both emergent and elective, has quickly become common practice due to fear of exposure, the desire to reassure patients that areas of the hospital are 'COVID-free', and competitive pressures within markets. Several organizations, including the American College of Surgeons, have recommended that testing via PCR/nucleic acid amplification be conducted or considered prior to surgery"

We see time and again that this carefully crafted language is ostensibly designed to "protect" us and "reassure" us and for "safety." In reality, it is a slow-burning form of eugenics to deter medical treatment for patients deemed "non-essential," and to reorient health services in the name of combatting COVID.

Are all human lives not essential?

Despite these precautions theoretically designed to protect patient safety, the NIH goes on to note that testing requirements don't actually confer the intended protections:

"There is little published evidence that testing patients who are not considered persons of interest (PUI) or not exhibiting symptoms of COVID-19 infection increases the safety of the hospital environment."

It's easy to frame these concerns as academic, but what about the cost to actual human lives?

Let's humanize this nightmare with separate tales from two lives, so you may deduce how far we have fallen as a society under the auspices of Public Health©.

May Denied Chance to Say Goodbye to Her Grandfather

When May visited her dying grandfather, Taweesilp, in a special Bangkok hospital ward, it was filled with terminally ill and hospice patients.

In rooms equipped with two-way microphones, dying patients and their families communicated through Plexiglas. The nurses begrudgingly permitted the family members of patients to see their loved ones and share final words of comfort in this intensely personal yet depersonalized fashion.

The cycle of life and death is inevitable for all who walk this earth. Yet never before has it been managed with such stone-cold military precision, devoid of empathy and compassion.

As May scanned the ward, she noticed a young boy no more than 6 years old weeping uncontrollably, his arms outstretched flailing around against the prison partition Plexiglas safety screen.

The boy was calling out to this sickly mother. Silently screaming and yearning to hold her offspring, she could only gesture and raise a weak smile behind bloodshot tear-streamed eyes, choking out whatever words of reassurance and comfort she could muster up through the microphone. The prison-guard nurse facilitated their communication.

Choking back tears herself from witnessing this firsthand, May realized that her own goodbyes to her Grandfather, along with her other immediate family members, would mirror that of the little boy and his mother.

The nurses took the details and identification from May and her family, then casually enquired for affirmation that they were all fully vaccinated. Upon being told that May was in fact vaccine-free, she was denied access to enter the two-way visitation room to say farewell to her grandfather.

In Thailand, grandparents often have a very special bond with their grandchildren, much more so than is common in the Western world. Grandparents are rarely sent off to nursing homes to fester and descend into catatonic madness. Instead, deeply respected elderly Thais are welcomed into their adult children's homes and well cared for.

As such, they play a critical role in the development and upbringing of the grandchildren. May was no exception. She was as close to her grandfather as to her father. She cannot and will not ever forgive the inhumane treatment she and her grandfather were forced to endure on that dark day -- all by hospital staff just "following The Science™."

Following a collision with a pick-up truck whilst riding his motorcycle in the Eastern Seaboard area of Thailand, Travis sustained multiple injuries upon impact with the ground.

After prompt delivery to the nearest hospital, it was apparent he had broken his right collarbone, his tibia in three places, and the femur close to the hip joint (potentially serious, as the broken bone could have possibly cut a vein or an artery), along with sustaining heavy damage to his right wrist and hand.

Although in agony, Travis was relieved to have been admitted to hospital; little did he know what was in store for him…

Travis was whisked away to the emergency room, where a team of doctors and nurses were present (all wearing masks and face shields, per COVID "public health" protocol). They hooked him up to IVs, attached sensors, cut his clothing off, administered painkillers and then ascertained the extent of the aforementioned injuries – obviously requiring immediate surgery.

This diagnostic work was swiftly followed by a nurse shoving a Q-tip up his nose, wheeling him out of the emergency room, all the while ignoring Travis' questions over where they were going and what was going on. Shortly after, the nurse told him 'now you have COVID' and she promptly walked out of the room without another word.

Travis had no COVID-19 symptoms.

Not knowing what was happening and in unbearable pain, Travis described the feeling of "being in purgatory" as he was left in limbo for a couple of hours. No water had been given at this point – salt in the wound, exacerbating the torturous wait. Yet Travis believe surgery was imminent.

Finally, another nurse entered the room, asking "are you ok? Are you hurt?", to which Travis clearly articulated that he was badly hurt and in dire need of surgery! The nurse stood up and left the room, leaving him to ponder if he had hallucinated the encounter…

After much pleading with the doctors, they agreed to perform surgery (donning significant layers of PPE gear) on the broken femur – with payment upfront, per Thai private hospitals' unofficial motto: "cash before care." Travis' wife was required to put down a 300,000 THB deposit (pprox.. $8,900 USD). Strangely, instead of using general anesthesia, the surgeon(s) elected to use a spinal block. Meaning that Travis was able to consciously experience the entire operation (without pain) with sensations of pushing and pulling and pressure throughout the body.

The next day, another female doctor explained that in order to perform surgery on the broken tibia and collarbone, the surgical team would once again need to wear an extra layer of PPE clothing, which would be an "inconvenience." She casually suggested that the patient should perhaps "go home for 10-14 days until COVID is done with, then come back." Travis expressed his utter disbelief at the audacity and callousness of such a proposal given by a medical professional – who swore to first do no harm – made to a patient in her care who literally could not move and was in excruciating pain, notwithstanding the serious potential complications arising from withheld surgery, which can result in something called nonunion – the non-healing of broken bones.

Alas, Travis persisted in his request for a second PCR test, despite strong resistance from the hospital to agree, as they claimed that no more tests were needed.

Bear in mind Travis that had no symptoms of COVID, at any point in this ordeal, whatsoever.

Eventually, the medical staff relented and gave him another PCR test, for which the results were not immediately disclosed (first test results given within 30 minutes). Later that evening a nurse let slip that the second test had been negative; a third test was then given at the insistence of the hospital the following day, also a negative result.

Mercifully, the final round of surgeries was eventually carried out. Travis is now healing up, using crutches to get around. He will never forget or forgive the unwarranted, unorthodox and unnecessary trauma he went through; a direct result of the global medical-industrial complex's capture by COVID hysteria. Nor will he forgive or forget the numerous health professionals who "followed the Science™" – devoid of empathy and absent of humanity toward a fellow human in dire need of help.

In a sick inversion of their stated function, US hospitals have become death traps.

Care is restricted to the compliant members of society who jump through the right hoops.

Financial carrots incentivize emergency room wards to haphazardly toss COVID patients onto ventilators. This issue has even been covered extensively, and even reluctantly acknowledged by our overseer "fact-checker" Snopes. (Check out episode #1757 of the Joe Rogan Experience podcast with Dr. Robert Malone for more extensive info on the ventilator hustle.)

In the abstract, the lockdowns are inhumane on their face. But up close and personal, when a young father-of-three's life hangs in the balance – the inhumanity becomes unforgivable.

"DJ Ferguson, 31, is in dire need of a new heart, but Brigham and Women's Hospital in Boston took him off their list, said his father, David.

He said the Covid vaccine goes against his son's 'basic principles, he doesn't believe in it'.

"Just following orders" didn't work for the culpable Nazis – no matter how low their rank – in the Nuremberg trials. Now is the time for Nuremberg Part Deux – no quarter, no leniency:

"Violating the Nuremberg Code on a mass scale against a captive civilian population is a war crime."