If ‘Gun Control’ Doesn’t Disarm the Government, It Is Authoritarian Propaganda The economic sanction should come as no surprise, since Trudeau has openly professed his deep admiration for the Chinese government specifically because of – not in spite of — its totalitarian nature. The authoritarian human rights trampling is the feature, not the bug.

Justin Trudeau: "There's a level of admiration I actually have for China because their basic dictatorship is allowing them to actually turn their economy around on a dime." pic.twitter.com/Vxwn2DhpgZ

The Canadian police and military that protect the politicians, though, will keep their guns. And they’ll certainly use them to enforce draconian COVID vaxx mandates or carbon lockdowns or whatever other social engineering program comes down the pike next. 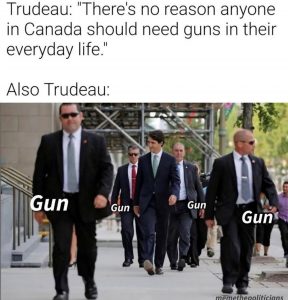 The Biden/Harris administration has been looking north – and across the pond at the multinational WEF globalists who really run the show – for guidance.

9mm bullets – which law enforcement officers carry as their standard-issue ammo — are now “high caliber,” according to Joe Biden’s handlers who script his talking points. So you shouldn’t be allowed to have them.

Mao, Stalin, Hitler, and rest of the roster of infamous dictators of 20th-century have a few common threads. One is a central pillar of their respective governing principles: “gun control – for thee, not for me.”

Yes, above is an unhinged rant in classic Alex Jones fashion – that’s just what he does. But the bombastic delivery doesn’t detract from the salient point: when you allow a monopoly of power in the hands of a concentrated class of sociopathic political elites, what you get is dictatorship, and possibly genocide.

Between the Big Three alone, those dictators have literally hundreds of millions of civilian deaths – not to mention the military casualties of their various wars – on their bloody hands.

Mass murder isn’t restricted to so-called “communist” or “fascist” dictators. The “liberal” US government is historically murderous itself. As Martin Luther King Jr. noted, the US government is indisputably the biggest purveyor of violence in the post-WWII world.

Below is the infamous “Collateral Murder” video that put Wikileaks founder Julian Assange on the map and rendered him the #1 journalistic target of the US security state. It depicts US government personnel gunning down unarmed civilians on purpose and then mopping up first responders when they arrive on the scene:

Estimates put the civilian casualty death count in Iraq alone since the 2003 US invasion (based on WMD lies) at around 200,000. Some put the potential death count much higher, possibly exceeding a million.

Hundreds of thousands of innocent lives were lost – all justified by documented, premeditated government lies and war propaganda to feed the military-industrial complex war machine.

Internally, the largest federal policing agency, the Department of Homeland Security, buys bullets by the billions.

As a domestic law enforcement agency, not a foreign-facing military force, for whom do you suppose those billions of DHS bullets are intended?

Even if – out of either naivety or a sense of charity they don’t deserve — you don’t want to believe that government actors have evil intent, then consider their incompetence.

For example, during yet another recent mass shooting at a public school, the government proved its unwillingness to “protect and serve.”

A lone incel-type teenager with a single rifle and no body armor killed children one by one uninterrupted in an elementary school classroom. Meanwhile, 19 uniformed cowards with badges and guns and tactical body armor and all kinds of military gear sat on their hands in the hallway because they didn’t want to put themselves in harm’s way.

But the truth is even worse than that: the cops outside the school formed an exclusion zone and handcuffed one mother trying to go in to save her child.

The cowardice and moral depravity – not to mention the dereliction of duty – is almost inconceivable. It boggles the conscience.

This underscores the dark reality: police exist to protect the social and political order, not to serve the interests of average people. They are the Praetorian Guard of the ruling class.

The grassroots right, which unfortunately has traditionally licked the boots of the police, is slowly waking up to that reality as the national security state trains its sights on “domestic extremists” (code for “anyone not on board with the neoliberal multinational WEF model of governance”).

What transpired in Uvalde, and worse, will happen on a macro scale when the only lawful weapons carriers left are so-called law enforcement.

The central point can’t be emphasized strongly enough: the government doesn’t want to protect anyone but the elites who pull the strings behind the scenes. They want a submissive, complacent, defanged populace.

What they want is a pack of sitting ducks, unable to defend themselves, kept in a state of continual terror via the Permanent Emergency, waiting to be herded to and fro from crisis to crisis via trauma-based conditioning.

“The whole aim of practical politics is to keep the populace alarmed (and hence clamorous to be led to safety) by an endless series of hobgoblins, most of them imaginary.”
-H.L. Mencken

Until the weaponized global corporate Deep State now pointing its guns at Americans’ heads is disarmed, no sane American should consider complying with unconstitutional gun bans – regardless of the proffered justification.