Last year’s “Tbilisi Pride” event in the capital city of the Republic of Georgia descended into chaos and gained worldwide attention. The organization’s offices were ransacked. A photographer sympathetic to the Pride agenda was beaten and later died.

The anti-“Pride” Georgian alliance is comprised of multiple factions — including, perhaps most importantly, the Orthodox Christian Church. This religious institution is still ubiquitous and highly influential in the East – much more so than in the secular West. Over 80% of the Georgian population is Orthodox Christian. 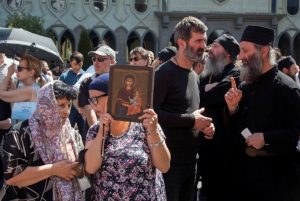 Western neoliberal critics have accused the Church of halting “social progress” (defined narrowly by them as whatever they say it is).

This year’s July 2nd “Tbilisi Pride” event was, like the previous year, met with fierce resistance from counter-protesters opposed to the LGBTQ© agenda’s penetration into Georgia.

Protesters outside of the parliament burned a rainbow flag.

Far-right groups are tearing up and burning rainbow flags outside the Georgian parliament. They plan to march to the offices of Georgian Dream, the EU Delegation to Georgia, and then return to parliament. pic.twitter.com/biTewuKGUw

One attempted to set himself on fire in protest Vietnamese monk-style. It failed in Don Quixote fashion as onlookers shoved him into a nearby fountain.

⚡️In downtown Tbilisi, a right-wing activist set himself on fire to protest against Tbilisi Pride Fest. The crowd pushed the man into the fountain. Video from local media. pic.twitter.com/p9UCR7QTw9

On the surface, this seems like standard culture war clashes we’ve become accustomed to in the West. However, underlying sociocultural and political trends, unique to Georgia and worthy of exploration, drive the conflict.

We recently chronicled the insidious, methodical manner in which corporate-funded and state-sponsored Western NGOs move into Africa to promote LGBTQ+++© ideology.

It’s the new-age colonialism, and Eastern Europe is largely experiencing the same phenomenon. The same neoliberal, Western-oriented cartel (what can broadly be termed the multinational corporate state) has gone to work here as well.

The force at work in Africa and at work in Georgia is the same network of corporate state and state-sponsored, non-state actors. Its objective is to reshape Eastern European culture just as it is in the West and Africa and, indeed, worldwide.

Consider USAID, the US government’s social engineering arm that doles out “foreign civilian aid and development assistance” and that has an enormous presence in Tbilisi.

In its guiding document, LGBTQI Vision for Action, USAID declares a fatwa of sorts against nations deemed insufficiently submissive to the LGBTQ+++© agenda:

What that means in non-bureaucratic English is that USAID leverages its social and economic development programs to coerce states it is ostensibly “helping” (like Georgia) into adopting and prioritizing its LGBTQ+++© agenda items.

If a recipient state like Georgia won’t comply, on religious or cultural grounds, then the spigot gets turned off. That’s how the West does “human rights.”

“USAID strongly encourages its implementing partners and their sub-awardees at all tiers to also develop and enforce comprehensive non-discrimination policies for their workplaces that address protection for all employees, including on the basis of sexual orientation and gender identity.”

USAID: ‘Oh, you want some bread, little boy? Step into the office here for a quick chemical castration and we’ll get you fed.’

Making funding for nutrition programs for starving children dependent on transing them is liberal, and loving.

The struggle for Georgian independence and its confounding political implications

The foreign aid issue isn’t Georgia’s only diplomatic problem in the culture war.

The conservative Georgian government is between a rock and a hard place on the geopolitical map. On one hand, it would like very much to fall under the NATO/EU security umbrella as a hedge against further Russian aggression.

Article V of the NATO treaty is a mutual security guarantee; an attack on one member is considered an attack on all. Similar security arrangements exist between EU member states. Joining either one would provide hitherto unimaginable security for Georgia, which is currently a sitting duck at the whim of the autocrats to the north.

In 2008, Russia flexed its post-Cold War military muscle and reasserted itself geopolitically by invading, occupying, and annexing a huge swathe of Georgian territory – not large by land mass but huge relative to the small geographical confines of Georgia. 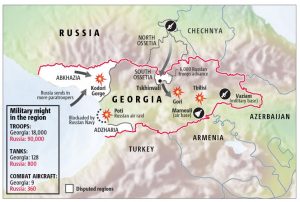 Georgian nationalists are understandably still upset about the encroachment on their sovereignty.

Countering aggression by its much-larger regional neighbor (and historical oppressor) is a geo-strategic priority shared by Ukraine. From the streets of Tbilisi to the most rural villages, Ukrainian flags, Georgian flags, and EU flags are on full display side-by-side as a gesture of solidarity. 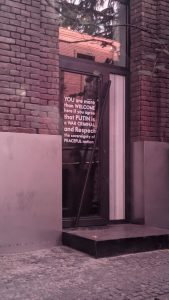 With the above-described security aims in mind, Georgia has repeatedly applied to join both the EU and NATO. Demonstrators routinely stage public events in Tbilisi demanding ascension to one or both of these organizations.

But the United States and the EU have tied their foreign aid and ascension protocols to the promotion of the LGBTQ+++© agenda.

So, without consenting to the new colonizers’ social demands, in Georgia’s view, there will be no outside assistance to secure its borders.

In summary: on one side of the ledger Georgia is by and large not on board with the Western cultural agenda; just 27% of Georgians, according to polling, believe protecting “queer rights” is important. On the other side of the ledger, they view joining the West as strategically essential for their survival as an independent nation.

The dichotomy makes for a bipolar political culture, as evidenced by the chaos on Tbilisi streets.

From the LGBTQ+++© corporate state’s perspective, it has the Georgian population right where it wants them. Russian aggression, or the mere threat of aggression, is a Godsend for the West – the boogeyman to use to slip the trans agenda into Tbilisi schools. 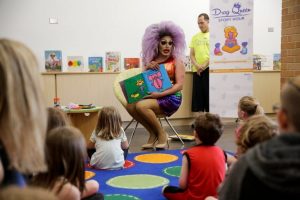 Above: Drag Queen Story Hour, the dystopian future Tbilisi’s progeny have to look forward to in the name of ‘progress’