Despite wide-ranging sanctions and import bans, Russia's vast energy sector continues to thrive, with the country managing to export nearly a billion dollars worth of fossil fuels per day in the first 100 days since its invasion of Ukraine. Indeed, higher crude oil and fuel prices have allowed Russian oil and gas revenues to climb even after the sanctions forced export volumes to dip.

Ultimately, there is no shortage of willing buyers lining up for cheap Russian Urals, nor is there a dearth of middlemen connecting them with Russian energy companies.

Lurking behind the scenes are Switzerland's giant trading houses Vitol, Glencore, and Gunvor as well as Singapore's Trafigura, all of which have continued lifting large volumes of Russian crude and products, including diesel, amid wide-ranging Western Sanctions on Russia.

Vitol has pledged to stop buying Russian crude by the end of this year, but that's still a long way from today. Trafigura promised it would stop buying crude from Russia's state-run Rosneft by May 15th but is free to buy cargoes of Russian crude from other suppliers. Glencore has promised it wouldn't enter any "new" trading business with Russia, but appears willing to maintain previous deals.

Meanwhile, India and China have been making up for much of the lost markets for Russian fuels. 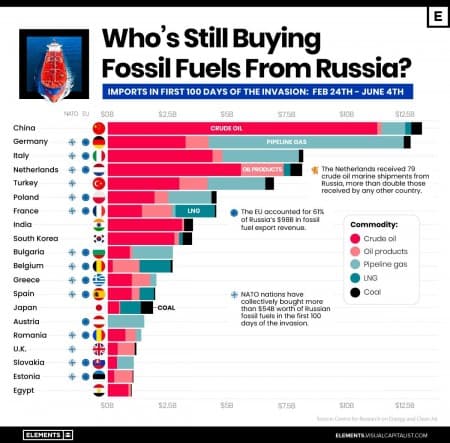 India has never been a big buyer of Russian crude despite having to import 80% of its needs. In a typical year, India imports just 2-5% of its crude from Russia, roughly the same proportion as the United States did before it announced a 100% ban on Russian energy commodities.  Indeed, India imported only 12 million barrels of Russian crude in 2021, with the majority of its oil sourced from Iraq, Saudi Arabia, the United Arab Emirates, and Nigeria.

But back in May, reports emerged of a "significant uptick" in Russian oil deliveries bound for India.

According to a Bloomberg report, India spent a good $5.1 billion on Russian oil, gas, and coal in the first three months after the invasion, more than five times the value of a year ago. However, China remains the biggest buyer of Russian energy commodities, spending $18.9 billion in the three months to the end of May, almost double the amount a year earlier.

And, it's all about the money.

According to the International Energy Agency (IEA), Urals crude from Russia has been offered at record discounts. Ellen Wald, president of Transversal Consulting, has told CNBC that a couple of commodity trading firms--such as Glencore and Vitol--were offering discounts of $30 and $25 per barrel, respectively, for the Urals blend. Urals is the main blend exported by Russia.

The experts say simple economics is the biggest reason why White House pressure to curb purchases of crude oil from Russia have fallen on deaf ears in Delhi.

"Today, the Government of India's motivations are economic, not political. India will always look for a deal in their oil import strategy. It's hard not to take a 20% discount on crude when you import 80-85% of your oil, particularly on the heels of the pandemic and global growth slowdown," Samir N. Kapadia, head of trade at government relations consulting firm Vogel Group, has told CNBC via email.

Still, it will not be lost on many readers that India has maintained a cozy relationship with Russia over the years, with Russia supplying the Asian nation with as much as 60% of its military and defense-related equipment. Russia has also been a key ally on crucial issues such as India's dispute with China and Pakistan surrounding the territory of Kashmir. 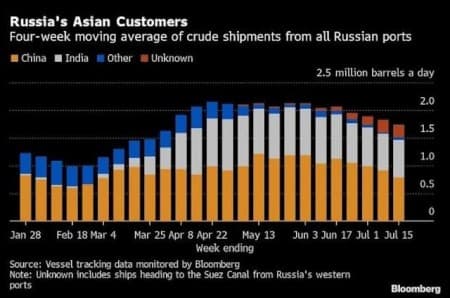 India's energy business with Russia has been booming, so much so that dozens of middlemen are muscling in, hoping to profit from the rapidly growing sector.

However, it's not the Trafiguras, Glencores, and Gunvors of this world doing the work; this time around, it's smaller, less well-known trading houses cutting supply deals with Indian refineries.

Bloomberg has reported that numerous mid-level commodity trading and energy firms, including Dubai's Wellbred and Coral Energy, as well as Singapore's Montfort and U.S.' Everest Energy, have entered the race to market Russian oil to Indian buyers.

And Indian oil buyers are loving it.

Bloomberg says that state-run refiners such as Indian Oil Corp. are warming to the idea of buying from lesser-known traders, while refinery officials say they are easier to work with due to less bureaucracy that slows negotiations with energy firms such as Rosneft PJSC. Trading houses usually serve the function of middlemen by bridging differences between sellers and buyers, and even offer different payment terms to assist in the movement of funds.

That said, a lot of the companies helping finance Putin's war are based in Switzerland, with the lion's share of Russian raw materials traded via Switzerland and its nearly 1,000 commodity firms.

Switzerland is an important global financial hub with a thriving commodities sector, despite the fact that it is far from all the global trade routes and has no access to the sea, no former colonial territories, and no significant raw materials of its own.

Oliver Classen, media officer at the Swiss NGO Public Eye, says that "this sector accounts for a much larger part of the GDP in Switzerland than tourism or the machinery industry". According to a 2018 Swiss government report, commodity trading volume reaches almost $1 trillion ($903.8 billion).

Deutsche Welle has reported that 80% of Russian raw materials are traded via Switzerland, according to a report by the Swiss embassy in Moscow. About a third of those materials are oil and gas, while two-thirds are base metals such as zinc, copper, and aluminum. In other words, deals signed on Swiss desks are directly facilitating Russian oil and gas to continue flowing freely.

With gas and oil exports coming in as the main source of income for Russia, accounting for 30 to 40% of the Russian budget, Switzerland's role cannot be overlooked in this war-time equation.  In 2021, Russian state corporations earned around $180 billion (€163 billion) from oil exports alone.

Again, unfortunately, Switzerland has been handling its commodities trade with kid gloves.

According to DW, raw materials are often traded directly between governments and via commodities exchanges. However, they can also be traded freely, and Swiss companies have specialized in direct sales thanks to an abundance of capital.

In raw materials transactions, Swiss commodity traders have adopted letters of credits or L/Cs as their preferred instruments. A bank will give a loan to a trader and as collateral, receive a document making it the owner of the commodity. As soon as the buyer pays the bank, the document (and ownership of the commodity) is transferred to the trader. The system gives traders more credit lines without their creditworthiness having to be checked, and the bank has the value of the commodity as security.

This is a prime example of transit trade, where only the money flows through Switzerland, but actual raw materials usually do not touch Swiss soil. Thus, no details about the magnitude of the transaction land on the desk of the Swiss customs authorities leading to highly imprecise information about the flow volumes of raw materials.

"The whole commodities trade is under-recorded and underregulated. You have to dig around to collect data and not all information is available," Elisabeth Bürgi Bonanomi, a senior lecturer in law and sustainability at Bern University, has told DW.

Obviously, the lack of regulation is very appealing to commodity traders - especially those that deal with raw materials mined in non-democratic countries such as the DRC.

"Unlike the financial market, where there are rules for tackling money laundering and illegal or illegitimate financial flows, and a financial market supervisory authority, there is currently no such thing for commodity trading," financial and legal expert at Public Eye David Mühlemann told the German broadcaster ARD.

But don't expect things to change any time soon.

Calls for a supervisory body for the commodities sector based on the model of the one for the financial market by the likes of Swiss NGO Public Eye and Swiss Green Party proposal have so far failed to bear fruit. Thomas Mattern from the Swiss People's Party (SVP) has spoken out against such a move, insisting that Switzerland should retain its neutrality, "We do not need even more regulation, and not in the commodities sector either."