Cloud wars in the Middle East: Governments are working to drain the heavens dry with geoengineering 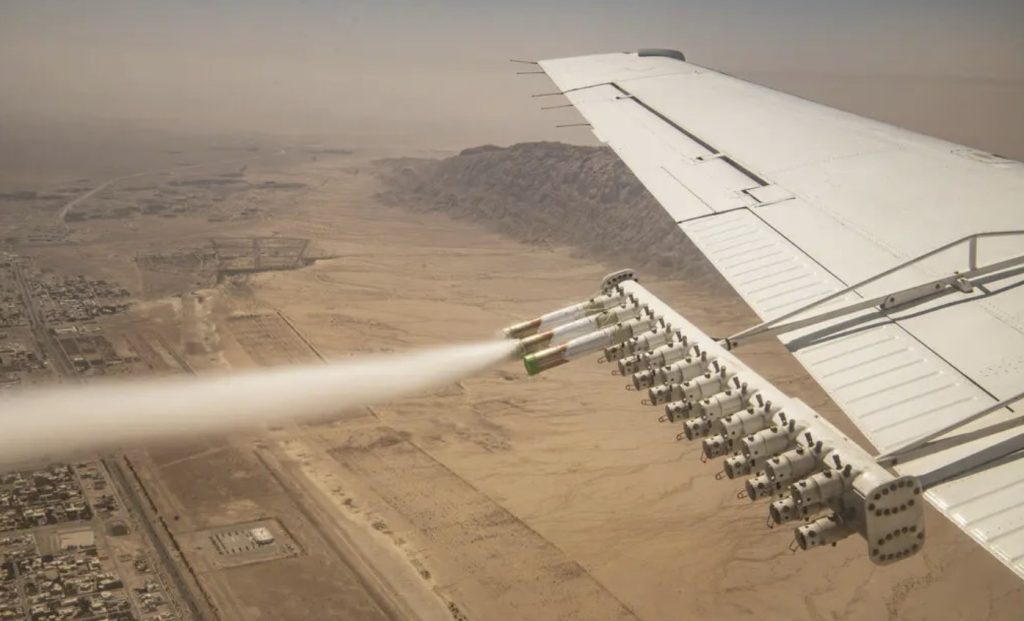 Iranian officials have worried for years that other nations have been depriving them of one of their vital water sources. But it was not an upstream dam that they were worrying about, or an aquifer being bled dry.

In 2018, amid a searing drought and rising temperatures, some senior officials concluded that someone was stealing their water from the clouds.

“Both Israel and another country are working to make Iranian clouds not rain,” Brig. Gen. Gholam Reza Jalali, a senior official in the country’s powerful Revolutionary Guards Corps, said in a 2018 speech.

The unnamed country was the United Arab Emirates, which had begun an ambitious cloud-seeding program, injecting chemicals into clouds to try to force precipitation. Iran’s suspicions are not surprising, given its tense relations with most Persian Gulf nations, but the real purpose of these efforts is not to steal water, but simply to make it rain on parched lands.

As the Middle East and North Africa dry up, countries in the region have embarked on a race to develop the chemicals and techniques that they hope will enable them to squeeze rain drops out of clouds that would otherwise float fruitlessly overhead.

With 12 of the 19 regional countries averaging less than 10 inches of rainfall a year, a decline of 20 percent over the past 30 years, their governments are desperate for any increment of fresh water, and cloud seeding is seen by many as a quick way to tackle the problem.

And as wealthy countries like the emirates pump hundreds of millions of dollars into the effort, other nations are joining the race, trying to ensure that they do not miss out on their fair share of rainfall before others drain the heavens dry — despite serious questions about whether the technique generates enough rainfall to be worth the effort and expense.

Morocco and Ethiopia have cloud-seeding programs, as does Iran. Saudi Arabia just started a large-scale program, and a half-dozen other Middle Eastern and North African countries are considering it.

China has the most ambitious program worldwide, with the aim of either stimulating rain or halting hail across half the country. It is trying to force clouds to rain over the Yangtze River, which is running dry in some spots.
While cloud seeding has been around for 75 years, experts say the science has yet to be proven. And they are especially dismissive of worries about one country draining clouds dry at the expense of others downwind.

The life span of a cloud, in particular the type of cumulus clouds most likely to produce rain, is rarely more than a couple of hours, atmospheric scientists say. Occasionally, clouds can last longer, but rarely long enough to reach another country, even in the Persian Gulf, where seven countries are jammed close together.

But several Middle Eastern countries have brushed aside the experts’ doubts and are pushing ahead with plans to wring any moisture they can from otherwise stingy clouds.

Today, the unquestioned regional leader is the United Arab Emirates. As early as the 1990s, the country’s ruling family recognized that maintaining a plentiful supply of water would be as important as the nation’s huge oil and gas reserves in sustaining its status as the financial and business capital of the Persian Gulf.

While there had been enough water to sustain the tiny country’s population in 1960, when there were fewer than 100,000 people, by 2020 the population had ballooned to nearly 10 million. And the demand for water soared, as well. United Arab Emirates residents now use roughly 147 gallons per person a day, compared with the world average of 47 gallons, according to a 2021 research paper funded by the emirates.

Currently, that demand is being met by desalination plants. Each facility, however, costs $1 billion or more to build and requires prodigious amounts of energy to run, especially when compared with cloud seeding, said Abdulla Al Mandous, the director of the National Center of Meteorology and Seismology in the emirates and the leader of its cloud-seeding program.

After 20 years of research and experimentation, the center runs its cloud-seeding program with near military protocols. Nine pilots rotate on standby, ready to bolt into the sky as soon as meteorologists focusing on the country’s mountainous regions spot a promising weather formation — ideally, the types of clouds that can build to heights of as much as 40,000 feet.

They have to be ready on a moment’s notice because promising clouds are not as common in the Middle East as in many other parts of the world.
“We are on 24-hour availability — we live within 30 to 40 minutes of the airport — and from arrival here, it takes us 25 minutes to be airborne,” said Capt. Mark Newman, a South African senior cloud-seeding pilot. In the event of multiple, potentially rain-bearing clouds, the center will send more than one aircraft.

The United Arab Emirates uses two seeding substances: the traditional material made of silver iodide and a newly patented substance developed at Khalifa University in Abu Dhabi that uses nanotechnology that researchers there say is better adapted to the hot, dry conditions in the Persian Gulf. The pilots inject the seeding materials into the base of the cloud, allowing it to be lofted tens of thousands of feet by powerful updrafts.

And then, in theory, the seeding material, made up of hygroscopic (water attracting) molecules, bonds to the water vapor particles that make up a cloud. That combined particle is a little bigger and in turn attracts more water vapor particles until they form droplets, which eventually become heavy enough to fall as rain — with no appreciable environmental impact from the seeding materials, scientists say.

That is in theory. But many in the scientific community doubt the efficacy of cloud seeding altogether. A major stumbling block for many atmospheric scientists is the difficulty, perhaps the impossibility, of documenting net increases in rainfall.

“The problem is that once you seed, you can’t tell if the cloud would have rained anyway,” said Alan Robock, an atmospheric scientist at Rutgers University and an expert in evaluating climate engineering strategies.
Another problem is that the tall cumulus clouds most common in summer in the emirates and nearby areas can be so turbulent that it is difficult to determine if the seeding has any effect, said Roy Rasmussen, a senior scientist and an expert in cloud physics at the National Center for Atmospheric Research in Boulder, Colo.

Israel, a pioneer in cloud seeding, halted its program in 2021 after 50 years because it seemed to yield at best only marginal gains in precipitation. It was “not economically efficient,” said Pinhas Alpert, an emeritus professor at the University of Tel Aviv who did one of the most comprehensive studies of the program.

Cloud seeding got its start in 1947, with General Electric scientists working under a military contract to find a way to de-ice planes in cold weather and create fog to obscure troop movements. Some of the techniques were later used in Vietnam to prolong the monsoon season, in an effort to make it harder for the North Vietnamese to supply their troops.

While the underlying science of cloud seeding seems straightforward, in practice, there are numerous problems. Not all clouds have the potential to produce rain, and even a cloud seemingly suitable for seeding may not have enough moisture. Another challenge in hot climates is that raindrops may evaporate before they reach the ground.

Sometimes the effect of seeding can be larger than expected, producing too much rain or snow. Or the winds can shift, carrying the clouds away from the area where the seeding was done, raising the possibility of “unintended consequences,” notes a statement from the American Meteorological Society.

“You can modify a cloud, but you can’t tell it what to do after you modify it,” said James Fleming, an atmospheric scientist and historian of science at Colby College in Maine.

“It might snow; it might dissipate. It might go downstream; it might cause a storm in Boston,” he said, referring to an early cloud-seeding experiment over Mount Greylock in the Berkshire Mountains of western Massachusetts.
This seems to be what happened in the emirates in the summer of 2019, when cloud seeding apparently generated such heavy rains in Dubai that water had to be pumped out of flooded residential neighborhoods and the upscale Dubai mall.

Despite the difficulties of gathering data on the efficacy of cloud seeding, Mr. Al Mandous said the emirates’ methods were yielding at least a 5 percent increase in rain annually — and almost certainly far more. But he acknowledged the need for data covering many more years to satisfy the scientific community.

Over last New Year’s weekend, said Mr. Al Mandous, cloud seeding coincided with a storm that produced 5.6 inches of rain in three days — more precipitation than the United Arab Emirates often gets in a year.

In the tradition of many scientists who have tried to modify the weather, he is ever optimistic. There is the new cloud-seeding nanosubstance, and if the emirates just had more clouds to seed, he said, maybe they could make more rain for the country.

And where would those extra clouds come from?

“Making clouds is very difficult,” he acknowledged. “But, who knows, maybe God will send us somebody who will have the idea of how to make clouds.” [NYT]