Over night the Ukrainian military, from positions in Vyshetarasovka, Nikopol and Marganets, again shelled the Zaporizhzhia Nuclear Power Plant on the south side of the Kakhovka Dnieper reservoir. 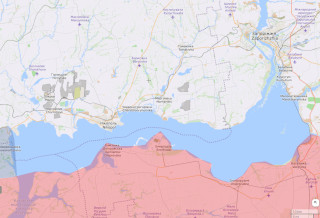 This was fallowed by an early morning attempt by Ukrainian forces to land a sabotage group near the village north east of the ZNPP. Some seven boats, two self-motorized barges and some 60 soldiers were involved in the suicidal mission. 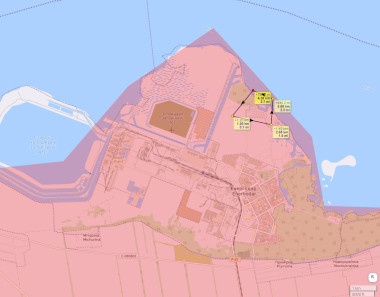 The paramilitary Russian National Guard (Rosgvardiya) which protects the plant immediately detected the insertion and attacked it. The Russian army send Ka-52 attack helicopters to help destroy the Ukrainian force. The two barges were sunk.

As the little town where the troops landed is outside of power plant there is no danger to the reactors.

An inspector team under IAEA director Rafael Grossi is on its way to the ZNPP.

U.N. nuclear safety officials who are heading to Ukraine’s Zaporizhzhia power plant are facing intense shelling but will continue to travel to the facility, the team’s leader said Thursday.

"There has been increased military activity, including this morning — until very recently, a few minutes ago," Rafael Mariano Grossi, the director general of the U.N.'s International Atomic Energy Agency (IAEA), said Thursday morning. But he added defiantly: "Having come so far, we are not stopping. We are moving now," despite the fact "the risks are very very high."

The IAEA inspectors are expected to cross the frontline between Ukrainian-held land and Russian-occupied Ukrainian territory and reach the nuclear power, Europe’s largest, later on Thursday. The U.N. inspectors will continue to advance, despite the fact intense shelling has been reported by both Ukraine and Russia around Zaporizhzhia, amid fears the risks of a nuclear accident are increasing.

Dima of the Military Summary Channel thinks (vid) that the Ukrainian saboteur group was tasked with laying low until the inspectors arrive. It would then take over the plant and prevent the IAEA inspectors from leaving. They would then be hostages at the plant which would guarantee that the Russian side would be unable to retake the site.

If that really was the plan it was one of the craziest I ever heard off. Then again - the Ukrainian Zelenski regime is crazy and he and his advisors are former movie producers who are trained to come up with such plots.

The Russian Ministry of Defense has said that the planned meeting point with the inspectors had come under fire from Ukrainian artillery.

Meanwhile 'western' media continue to quote the ludicrous Ukrainian claims that the Russia is shelling the power plant which is under its troops control since early March:

On Tuesday, Ukrainian officials accused Russia of shelling the path the IAEA inspectors will take to reach the plant to force the group to pass through Crimea instead. They did not provide evidence for their claims, and Russia did not directly respond to the allegation. On Wednesday, Russian Foreign Ministry spokeswoman Maria Zakharova said, “Russia is doing everything or even more in order to make the mission … happen, be safe, and accomplish all of its tasks.”
...
“Every minute the Russian troops stay at the nuclear power plant is a risk of a global radiation disaster,” Ukrainian President Volodymyr Zelensky said last week.

Ukrainian officials remain worried that the Kremlin’s forces will sanitize the plant ahead of the visit and intimidate workers into not telling the truth about Russian behavior, prompting the IAEA to bless the safety protocols at the plant. That would, in effect, legitimize Russia’s occupying presence, the Ukrainians fear.

“The worst-case scenario is when they come and say it’s best that the station is under Russian control [and] in general, nuclear safety protocols are followed,” Ukrainian Foreign Minister Dmytro Kuleba told The Washington Post last week.

The nuclear inspectors were scheduled to spend the night at a hotel in Zaporizhzhia before visiting the plant first thing on Thursday morning, a spokesman for the plant said.

The U.S. military disagrees with the Ukrainian claim that Russia is shelling the ZNPP. On Monday a Pentagon background briefing touched the issue:

Q: [..] White House Strategic Communications Coordinator Kirby said earlier today that the U.S. does not have a way of -- of accounting the number of shells -- artillery shells fired around the Zaporizhzhia plant in Ukraine. I was wondering if you could give clarity on exactly what level of visibility the U.S. has on the military activity around the plant and which side is shelling at any given moment?

SENIOR MILITARY OFFICIAL: Yeah, I -- so what I know for sure is that the -- the Russians are firing from around the plant and, you know, I also know that there are rounds that have impacted near the plant. You know, the way that we’re tracking the forces around the nuclear power plant -- it’s not like there’s a -- a constant -- it’s hard to explain, I guess. It’s not like there are forces in every square inch of the area around the plant. And so we also know that the Russians have fired in the vicinity of the plant.

And I don’t want to say that the Ukrainians haven’t fired in that vicinity either because I think there’s probably a likelihood that they have, but in good -- in a number of cases, it’s returning fire of the Russians who are firing from those locations.

... and in a number of other cases they target the power plant.

Here is another crazy issue. The Ukrainian Kherson offensive continues despite extremely heavy losses. The Rybar map shows on of the axes where the Ukrainian army still tries to press forward after having been rooted from Bruskyns’ke. 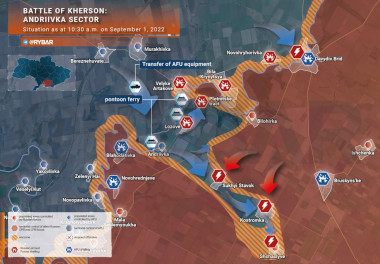 The area is flat open steppe with no coverage for troops to hide. The Russian side is by fare superior in artillery and has air supremacy. Whoever ordered the Ukrainians to press this suicidal campaign under these circumstance is guilty of murder and should go to prison for the rest of his life.