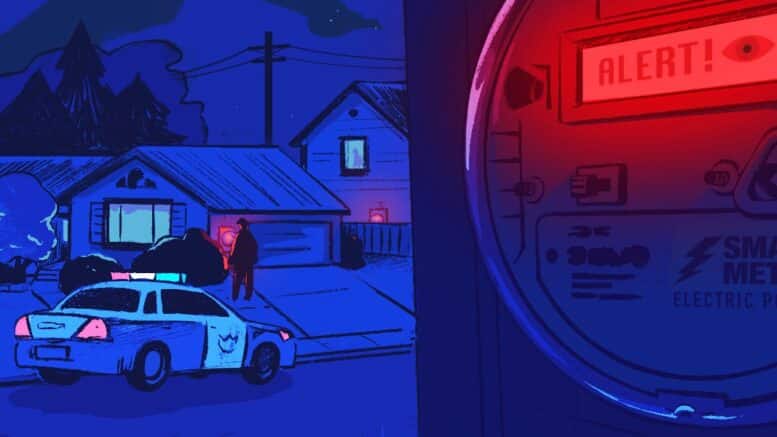 Police are routinely breaking the law to enforce the law, which is patently absurd. Smart meter data is on electricity usage is sent via WiFi to the utility company, recording detailed activities within the home or business. Thus, there is no longer expectation of “sanctuary” within your own home. Detailed surveillance has been a key plank of Technocracy since its original creation in 1932.

As a reminder, I have warned about Smart Meters since their massive kickoff was started in 2009 by President Obama. Those who decided to fight based on health concerns of radiation came up mostly empty-handed. The fight should have been over exactly what is happening in this story: institutionalized violation of all privacy. ⁃ TN Editor

The Sacramento Municipal Utility District (SMUD) searches entire zip codes’ worth of people’s private data and discloses it to police without a warrant or any suspicion of wrongdoing, according to a privacy lawsuit filed Wednesday in Sacramento County Superior Court.

“SMUD’s policies claim that ‘privacy is fundamental’ and that it ‘strictly enforces privacy safeguards,’ but in reality, its standard practice has been to hand over its extensive trove of customer data whenever police request it,” said EFF Staff Attorney Saira Hussain. “Doing so violates utility customers’ privacy rights under state law and the California Constitution while disproportionately subjecting Asian and Asian American communities to police scrutiny.”

Utility data has historically provided a detailed picture of what occurs within a home. The advent of smart utility meters has only enhanced that image. Smart meters provide usage information in increments of 15 minutes or less; this granular information is beamed wirelessly to the utility several times each day and can be stored in the utility’s databases for years. As that data accumulates over time, it can provide inferences about private daily routines such as what devices are being used, when they are in use, and how this changes over time.

The California Public Utilities Code says public utilities generally “shall not share, disclose, or otherwise make accessible to any third party a customer’s electrical consumption data ….” except “as required under federal or state law.” The California Public Records Act prohibits public utilities from disclosing consumer data, except “[u]pon court order or the request of a law enforcement agency relative to an ongoing investigation.”

“Privacy, not discrimination, was what SMUD promised when it rolled out smart meters,” said Monty Agarwal, EFF’s co-counsel at Vallejo, Antolin, Agarwal, and Kanter LLP.

Yet SMUD in recent years has given protected customer data to the Sacramento Police Department, who asked for it on an ongoing basis—without a warrant or any other court order, nor any suspicion of a particular resident—to find possible illicit cannabis grows. The program has been highly lucrative for the city: Sacramento Police in 2017 began issuing large penalties to owners of properties where cannabis is found under a new city ordinance, and levied nearly $100 million in fines in just two years.

About 86 percent of those penalties were levied upon people of Asian descent. The lawsuit alleges that officials intentionally designed their mass surveillance to have this disparate impact on Asian communities. The complaint details how a SMUD analyst who provided data to police excluded homes in a predominantly white neighborhood, as well as how one police architect of Sacramento’s program removed non-Asian names on a SMUD list and sent only Asian-sounding names onward for further investigation.

“California voters rejected discriminatory enforcement of cannabis laws in 2016, while the Sacramento Police Department and SMUD conduct illegal dragnets through utility customer data to continue these abuses to this day,” Khoja said. “This must stop.”