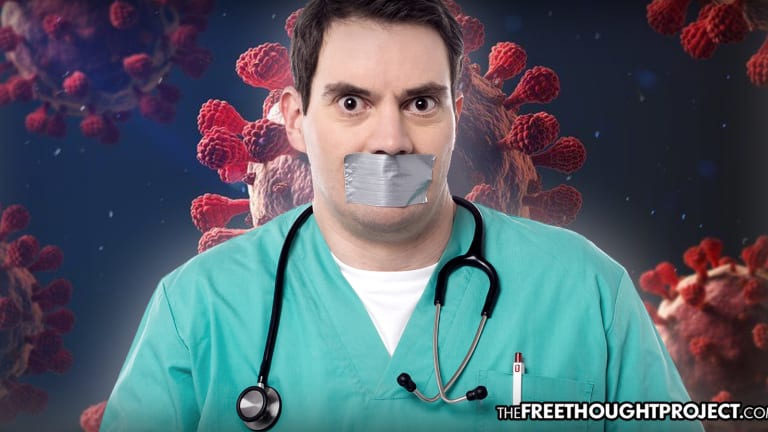 As TFTP has reported, Sen. Richard Pan, D-Sacramento, who has sponsored a slew of mandatory vaccine laws throughout his career came out in 2019 to threaten the speech of those who question forced vaccination. Throughout the pandemic, Pan has been staunchly opposed to free speech and advocated for silencing anyone and everyone who doesn't worship at the altar of Big Pharma and TheScience(TM).

With the passage of Assembly Bill 2098 in August, this tyrannical state senator has finally gotten his way and even doctors who question the safety of a product from a company with a known history of criminal behavior — will be punished by the state for doing so.

The new law is set to go into effect on January 1 and doctors who disseminate information that diverges from the “contemporary scientific consensus” will face persecution. Now, some of them are fighting back.

A group of doctors has filed a lawsuit against Governor Gavin Newsom's tyrannical administration, asking the court to block the law from taking effect. The group accurately points out the chilling effect this law has on the right to free speech.

The complaint argues that the new law “impedes their ability to communicate with their patients in the course of treatment.”

“In safeguarding Americans’ rights to free speech and expression, the First Amendment applies not only to expression of majority opinions, but to minority views as well,” the complaint states. The minority views, according to the doctors, include the very real and documented adverse effects of vaccination and mask efficacy for example.

The doctors argue that “contemporary scientific consensus” is “undefined in the law and undefinable as a matter of logic.”

“No one can know, at any given time, the ‘consensus’ of doctors and scientists on various matters related to prevention and treatment of COVID-19,” the complaint adds. “And even if such a poll could theoretically be taken, who would qualify to be polled? Only those doctors treating COVID-19 patients? All doctors and scientists, or only those in certain fields?”

TFTP predicted this Orwellian nightmare was coming years ago after a letter Pan wrote to the Attorney General of the United States, claiming that the “deliberate spread of vaccine information discouraging vaccination” requires the surgeon general to “stop this attack on our nation’s health by addressing the spread of vaccine misinformation.”

He literally advocated for people to be jailed for questioning vaccines — and now he's gone even further.

But is questioning the safety of the COVID-19 jab really misinformation? According to the bill's text:

THE PEOPLE OF THE STATE OF CALIFORNIA DO ENACT AS FOLLOWS:

SECTION 1.The Legislature finds and declares all of the following:

(b) Data from the federal Centers for Disease Control and Prevention (CDC) shows that unvaccinated individuals are at a risk of dying from COVID-19 that is 11 times greater than those who are fully vaccinated.

(c) The safety and efficacy of COVID-19 vaccines have been confirmed through evaluation by the federal Food and Drug Administration (FDA) and the vaccines continue to undergo intensive safety monitoring by the CDC.

Aaron Kheriaty, a licensed medical doctor in the state of California points out, all three of these statements are demonstrably false:(a) The death count figures cited are grossly overestimated by hospitals failing to distinguish dying from covid vs. dying with covid and the financial incentives from the Centers for Medicare and Medicaid Services (CMS) to overestimate covid deaths;

(b) the efficacy of vaccines has declined with time and new variants, so the statistic cited here is no longer true of the vaccines against omicron;

(c) the CDC has consistently failed to follow-up on serious safety signals, apart from myocarditis, and the post-marketing surveillance data acquired from our FOIA request showed serious safety issues in the first three months of vaccine rollout.

Now, however, any physician who raises these or other inconvenient scientific facts or study findings could be disciplined by the medical board, as the text of the law explains:

“It shall constitute unprofessional conduct for a physician and surgeon to disseminate misinformation or disinformation related to COVID-19, including false or misleading information regarding the nature and risks of the virus, its prevention and treatment; and the development, safety, and effectiveness of COVID-19 vaccines.”

If this is the case and they will apply this equally, will they go back and punish all the doctors who told the country for months that the vaccines are 100 percent effective? Will those who claimed that should you receive a COVID-19 vaccine you will not catch the virus and will not get sick, which is now a demonstrably false statement, be punished?

According to former CDC director Dr. Deborah Birx, this was a statement that they knew was false from the beginning.

In early 2021, CDC director Rochelle Walensky had no problem going on national television and declaring to the world that if you took the covid-19 vaccine "you will not get or spread covid." Within weeks, this was found to be entirely untrue.

The CDC also changed positions on masks several times, claimed you can catch covid from touching surfaces, and continues to recommend cloth masks, despite the massive pile of data showing they do absolutely nothing.

Dr. Anthony Fauci also spread the exact same misinformation, telling Americans that they had nothing to worry about once they took the shots. Yet hundreds of thousands of people who took the shots, got sick and died.

This bill will inevitably stifle medical progress by silencing anyone who challenges The Science(TM). But as we've seen over the last two-and-a-half years, those who challenged the consensus on COVID-19 have helped usher in new treatments, policies, and programs that have saved lives. It was the establishment "consensus" that refused to change and adapt, especially when it came to children — causing immeasurable suffering — the likes of which we are only just realizing.

Dr. Tracy Hoeg, a plaintiff in the suit who has been the senior author of nine epidemiological analyses, said in the complaint that she is “afraid of saying something to my patients that I know is consistent with the current scientific literature but may not yet be accepted by the California Medical Board.”

Six of the nine epidemological analyses were published in peer-reviewed journals and covered topics including the efficacy of mask mandates and the risks and benefits of Covid-19 vaccines for children.

Physicians must “feel free to speak truthfully with their patients if they wish to gain and maintain their trust,” she said.

Jenin Younes, counsel for the New Civil Liberties Alliance, a nonpartisan civil rights firm that is representing the doctors, said in a statement that the law is the “the result of an increasingly censorious mentality that has gripped many lawmakers in this country.”

“That this shocking bill passed through the state legislature and was signed into law by Governor Newsom demonstrates that far too many Americans do not understand the First Amendment,” Younes said.