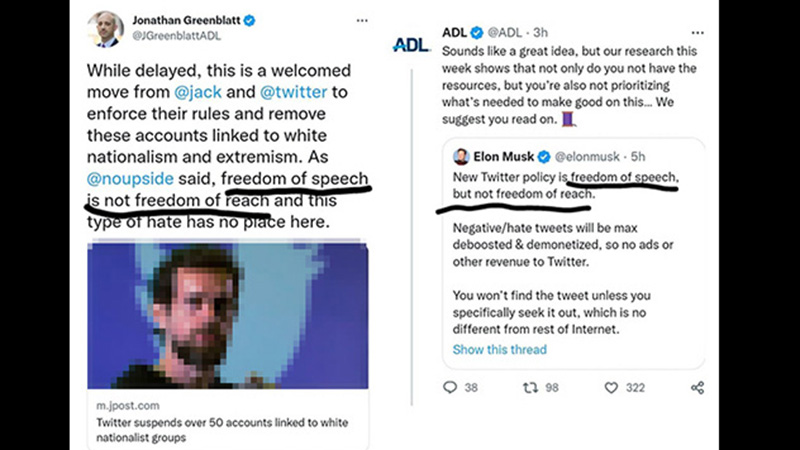 Twitter CEO Elon Musk on Friday announced that Twitter’s new policy is “freedom of speech, but not freedom of reach,” which is an idiotic meme that’s been repeated ad nauseam by Anti-Defamation League CEO Jonathan Greenblatt.

Negative/hate tweets will be max deboosted & demonetized, so no ads or other revenue to Twitter.

You won’t find the tweet unless you specifically seek it out, which is no different from rest of Internet.

“New Twitter policy is freedom of speech, but not freedom of reach,” Musk said. “Negative/hate tweets will be max deboosted & demonetized, so no ads or other revenue to Twitter. You won’t find the tweet unless you specifically seek it out, which is no different from rest of Internet.”

“Freedom of speech does not mean freedom of reach” is an idiotic meme put out by Jonathan Greenblatt (who had a meeting with Musk immediately after his takeover of Twitter).

Freedom of speech is freedom of reach.

You don’t have freedom of speech if you’re not allowed to speak in the public square.

Shadow banning and “deboosting” speech deemed “hate” is the equivalent of locking someone trying to speak out at a town square in a soundproof box and then telling them they have “free speech” within the box.

Just because “speech” and “reach” rhyme does not make it sound logic.

“You have freedom of speech but if we deem it ‘hate’ we’re going to put you in this box where no one can hear you.”

“Your free speech rights will be fully protected within the box.” pic.twitter.com/4SwGBhZAn4

Of course, Greenblatt gave Musk no credit for echoing their BS and instead whined about how he’s not doing enough to censor “antisemitic sentiment” on Twitter.

Sounds like a great idea, but our research this week shows that not only do you not have the resources, but you’re also not prioritizing what’s needed to make good on this… We suggest you read on. 🧵 https://t.co/22VksCOXMm

Our Center on Extremism also analyzed a statistically representative sample from over 529K tweets mentioning “Jews” or “Judaism” both before and after Elon Musk’s takeover. They found a notable increase in the percentage of tweets that espoused or defended antisemitic sentiments.

This data suggests that in the two weeks following Musk’s Twitter takeover, the prevalence of tweets (excluding retweets) referencing “Jews” or “Judaism” with an antisemitic sentiment increased by 40.6%. pic.twitter.com/8OWKv2lg54

Whatever happens to @Twitter, new social platforms need to center trust and safety from the outset, or risk being subject to the same fate. In the meantime, @elonmusk has put Twitter on deathwatch. It didn’t have to be this way.

The ADL is teaching schoolchildren across America that only white people can be racist and putting out in the media the lie that right-wing “white extremists” are America’s biggest terror threat (both deliberate attempts to create anti-white sentiment) while simultaneously demanding that any and all negative “sentiment” towards their own in-group be censored.

Musk was asked whether he would be restoring Alex Jones to the platform and he responded simply, “No.” The public voted overwhelmingly in favor of reinstating Trump’s account but bots are seemingly now skewing the poll back closer to even. Musk weighed in on it himself, saying “The bot attack is impressive to watch!”

The bot attack is impressive to watch!

According to media reports, Musk did restore the accounts of The Babylon Bee, Kathy Griffin and Jordan Peterson.

After being given his account back, Peterson immediately called for all anonymous users to be blocked from posting “with the real verified people.”

Don’t allow the anonymous troll-demons to post with the real verified people @elonmusk. Put them in their own hell, along with others like them: LOL LULZ BRO BRUH hyper-users are narcissistic, Machiavellian, psychopathic and sadistic. Really: https://t.co/l4SLpzUwmn https://t.co/RWTYUL276Z

Former Twitter CEO Jack Dorsey said it would be a “big mistake.”

that would be a big mistake

“Verification through the payment system plus phones, but allowing pseudonyms is the least bad solution I can think of,” Musk responded.

Verification through the payment system plus phones, but allowing pseudonyms is the least bad solution I can think of

Musk’s policies are in many ways worse than before the takeover but they’re seemingly not being enforced because most of Twitter’s employees have either resigned or been fired — making the site overall better.